Everyone knows that multiculturalism is a live issue in Canada today. However, everyone does not seem to be fully aware that since religion is an aspect of culture, an acceptance of multi culturalism involves an acceptance of religious pluralism. To help Catholics reflect on the significance of religious pluralism for their own faith, this article will attempt a brief survey of the Church's attitude to persons of other faiths.

In Catholicism before Vatican II, the Church's attitude to non-Christian religions was negative. Today, her attitude is positive. Let us look at both attitudes. The negative Catholic attitude to other religions has its origin in the Old Testament where Yahweh established a covenant with the Israelites through Abraham (Genesis 15;17:1-14). Yahweh promised to be their God and they pledged to be God's people. From this relationship the ancient Israelites deduced that they were God's chosen people. When the Catholic Church took over the Old Testament as part of her scriptures, she applied this claim to herself. The Church, as the New Israel, was now the chosen people of God. As the chosen people, she excluded those outside the Church from the redemptive grace of Christ and considered other religions the work of fallen angels or evil spirits. This view was summed up in the dictum: "Outside the Church (there is) no salvation."

This strictly exclusive stance did not hold undisputed sway in the early centuries when the Church was a small body struggling for survival. At that time many theologians developed a ,theology that tried to admit those outside the Church to a share of her truth. But as soon as Christianity became the official religion of the Roman Empire in 313 AD, the Church began to abandon her inclusive spirit and adopt a position that required actual membership in the Church for salvation. The Medieval Church upheld this view, and the Council of Florence marked the zenith of this attitude when, in 1442, it affirmed that all non-Catholics will go "to the everlasting fire ... unless before the end of life they joined the Church."

However, with the great voyages of exploration and the discovery of new continents and peoples in the 15th and 16th centuries, the Church was called to conversion. She had to reconcile the new knowledge that the greater part of men and women who had lived and who were then living were not members of the Church with the fact that a God of love must will all men and women to be saved. The Council of Trent (1547) achieved this reconciliation through two ideas: baptism of desire, according to which membership in the Church might be had not only by water, but also by an act of will; and implicit faith, according to which persons who had lived in ignorance of the Church might obtain the grace of salvation through an implicit desire for it. The Church was thus able to maintain that outside the Church there is no salvation and to explain the salvation of men and women outside the visible Church.

In 1949, when Father Leonard Feeney, S.J., of Boston denied salvation to those who were not actual members of the visible Church, Rome wrote to Archbishop Cushing and reiterated the position of Trent, that in order to gain eternal salvation "it is not always required that a person be incorporated in fact as a member of the Church."

Today, as the Church is once more rethinking her attitude to other faiths, her appraisal of non Christian religions is very positive. Vatican II makes it clear that all religions are instruments of salvation. God finds people where they are, and speaks to them in the concrete religions of their historico-cultural situation. In fact, the "Decree on the Missionary Activity of the Church" affirmed that there is truth and grace among the nations as a sort of secret presence of God." Moreover, the "Declaration on the Relationship of the Church to Non Christian Religions" not only states that "the Jews still remain most dear to God," but also that "Upon the Muslims ... the Church looks with esteem." And in speaking of all non Christian religions, the "Declaration" explicitly states that the Roman Catholic Church "rejects nothing which is true and holy in these religions that in fact she looks with sincere respect upon their ways of conduct, life and teachings which, while differing in many respects from what she holds, nevertheless often reflect a ray of that truth which enlightens" men and women everywhere. In a statement relevant to the Canadian situation, the Council exhorted Catholics "through dialogue and collaboration with the followers of other religions, and in witness of Christian faith and life, to acknowledge, preserve and promote the spiritual and moral goods found among them as well as the values found in their society and culture."

Through statements such as these, the Church has acknowledged that she does not have a monopoly on the Holy Spirit. Indeed, since Trent there is a clear affirmation that salvation is possible and already operative outside the visible Church, and since Vatican II, the stance of openness and dialogue which the Church desires to have with non-Christians relates the Church to them through the truth and goodness they possess.

Furthermore, in an effort to align the Church with Vatican II positive evaluation of non-Christian religions, the popes themselves have offered encouragement. In 1964, Pope Paul VI established the Secretariat for Non-Christian Religions, appropriately enough on Pentecost Sunday when people of every nation heard God's word expressed in their own historico-cultural terms. Its purpose was "to search for methods and ways of opening a suitable dialogue with non-Christians in order that non-Christians come to be known by Christians, and that in their turn non-Christians can know Christian doctrine and life."

Following the lead of Vatican II and Pope Paul VI, John Paul II in his encyclical "Redemptor Hominis" (The Redemption of Humanity) speaks glowingly of the "magnificent heritage of the human spirit that has been manifested in all religions." John Paul II adds that they are the "many reflections of the one truth, 'seeds of the Word,' attesting that though the routes taken may be different, there is but a single goal ... a quest for God and...for the full meaning of human life."

In "Redemptor Hominis" John Paul II is aware of the concerns of many that exposure to other faiths may be "harmful to the cause of the Gospel," that it may lead to a "further rupture in the Church," that it may cause "confusion of ideas in questions of faith and morals," and may even lead to "indifferentism." However, in speaking of ecumenism, he says that it "is obvious that this new age in the Church's life demands of us a faith that is particularly aware, profound and responsible." For him, openness is not a betrayal of commitment but often a call to faith, as when he says that "the firm belief of the followers of non-Christian religions - a belief that is also an effect of the Spirit operating outside the visible confines of the Mystical Body - can make Christians ashamed at being often themselves so disposed to doubt concerning the truths revealed by God."

This positive attitude of Vatican II and of the popes recognizes that real commitment to faith is secure, and as secure, belongs to the world of dialogue and collaboration rather than to the sphere of judgement. Catholics must be willing to listen as well as to speak. In short, according to the Church's current teaching, the challenge of living with religious pluralism is openness.

EDITOR'S NOTE: Fr. Mohammed teaches Systematic Theology at Regis College in the Toronto School of Theology. Our May, 1990, issue presented his insights on interfaith dialogue. In this sequel he writes more specifically on the attitude of the Church toward people of other faiths. This article has been condensed. It is available in its entirety, with references, by writing to the Editor of Scarboro Missions. 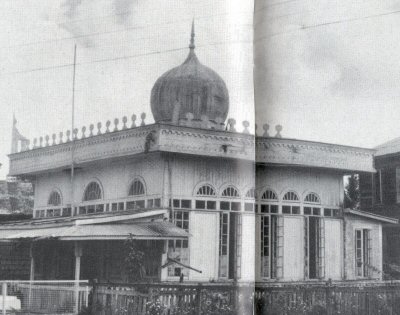