Hinduism is the oldest of the world's living religions. It originated in the Indus River Valley in the northwest section of the Indian subcontinent. Hinduism was not founded by a particular prophet or spiritual teacher but rather evolved from several cultural, racial and religious traditions over a period of 5,000 years. 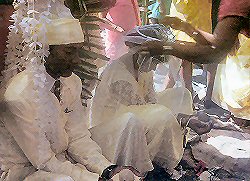 Bride and groom are blessed at a Hindu wedding ceremony, Guyana

As a religion it is unique in its historical ability to integrate new practices, sects, and traditions while not diminishing previous layers of development. Hinduism is commonly identified with the mainstream culture of India where most Hindus live.

It is difficult for the Western Christian mind to grasp the pluralistic reality of Hinduism. The outside observer is often bewildered by the dazzling and endless array of Hindu deities, myths, rituals, symbols and sects. There are literally hundreds of images used to depict the God of Hinduism.

Such pluralism is foreign to the Christian faith which places so much emphasis on conformity to established dogma and religious authority. Yet Hinduism has no universally accepted body of beliefs and practices nor any central hierarchy or authority. This helps to explain why a Hindu would never reject someone because of her or his religious beliefs.

"Some Hindus have a devotion to Jesus whom they experience as one of many divine incarnations. In India, there are several Hindu temples devoted to Jesus."

This amazing spirit of pluralism and tolerance reflects the Hindu conviction that every religious sensitivity comes from God. So while faith in the Christian tradition is often identified with adherence to religious authority, Hinduism maintains that people attempt and achieve God-realization in many and various ways.

These qualities of openness and tolerance also affect the way in which Hindus view other faith traditions. Some Hindus, for example, have a devotion to Jesus whom they experience as one of many divine incarnations (like Buddha or Krishna). In India, there are several Hindu temples devoted to Jesus.

When Pope Paul VI visited India, hundreds of thousands of people filled the streets and stood in silence. Hindus regard a religious leader, of whatever faith, as a special manifestation of God. 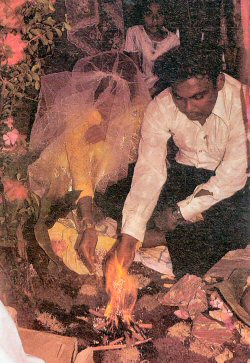 Most religious faiths give a prominence to the sacred fire, Guyana

For Hindus, each religion is an expression of truth, an effort on the part of humanity to express one particular dimension of God. But there is no one true religion. God has many faces, it is not a question of a common creed but rather a common quest after the Godhead. So while Hindus are not all that concerned about orthodoxy, they are very concerned about orthopraxy, that is to say, how one lives one's life. This explains why many Hindus do not regard Hinduism as a religion but rather as a way of life. And a way of life that focuses on the direct experience of God. The goal is not to know the truth but to realize the truth. Here we note the emphasis on the experiential rather than the creedal the intuitive rather than the rational.

But how does a Hindu come into this direct experience of God? In other words, what is salvation for the Hindu?

For Hindus, the meaning and purpose of life consists in finding the innermost soul, Atman, the real self, the true nature. But how does one find this deepest self amidst all the illusions, cravings and aspirations of the human heart?

Hindu wisdom speaks of the four wants. The first three of these are the pursuit of pleasure, the pursuit of fame, success, power and money, and the aspiration to be a good citizen, a person of service to others. But these pursuits and aspirations, even when achieved, cannot satisfy the longings of the human soul.

If the person can manage to break through the superficial self with its many surface preoccupations, illusions and distractions, there she/he will find an inexhaustible reservoir of being that is unlimited in terms of joy an awareness.

This discovery of the hidden self - the eternal centre of every soul - will concur precisely with an ultimate encounter with God. This state of freedom and bliss wherein the soul attains complete union with self and God is referred to as Nirvana.

"Hindus do not subscribe to a definitive creed or body of beliefs, but one doctrine that almost all Hindus believe in is the transmigration of souls - reincarnation."

But the journey toward the true self will take many lifetimes. As previously mentioned, Hindus do not subscribe to a definitive creed or body of beliefs, but one doctrine that almost all Hindus believe in is the transmigration of souls - reincarnation.

The soul is eternal; it can never die. When the body perishes, the soul is reborn in animal or human form. Whether the soul is to be reborn in a higher or lower species will be determined by the Law of Karma - the moral law of cause and effect. What one sows in the present life will be reaped in the next. Actions in this life determine conditions in the next. The individual must take full responsibility for her - himself and become subject to the future that she/he is now creating.

Advancement is measured in terms of how well or how poorly the individual fares in gaining awareness of the true self. The Hindu will continue to wander through this cycle of death and rebirth until the soul is absorbed in God and achieves Nirvana.

When confronted with the amazing diversity of Hindu gods and goddesses, the non-Hindu is quick to assume that Hinduism is a polytheistic religion. But to the Hindu, each of these many divinities is but one of the limitless expressions and dimensions of the supreme being called Brahman - the One who is All, the totality of creation, the Infinite, the Omnipotent, the Unutterable. The One whom one Hindu philosopher addressed as "Thou, before whom all words recoil."

Three of the most prominent deities that compose Brahman are Brahma, the Creator, Vishnu, the Preserver, and Shiva, the Destroyer. For some Hindus, God is personal; for others, God is impersonal and for yet others, God is both.

Hindus observe many practices that help them achieve their goal of experiencing God directly. Many Hindus pray in the morning, at noon and in the evening. And while they do worship in their temples, Hinduism is not a temple-based religion. Hindu families often have a room set aside in their homes for worship.

The silent repetition of mantras or sriptural verses is the chief method of prayer. For some Hindus, the goal of prayer and meditation is samadhi, a state wherein one's psychic attention becomes so concentrated that the self is dissolved and plunged into a total state of immersion in God.

Other religious practices which correspond somewhat to Christian ones include:

Hinduism, unlike Judaism, Islam and Christianity derives its wisdom from more than one holy book. The Vedas, composed around 2,000 BC, are the oldest scriptures among the world's major faiths. They are a collection of hymns and animist songs and prayers.

The Brahmanas, written around 900 BC, are a set of ritual books. The Upanishads (700 BC) are commentaries on and interpretations of the Vedas. The Bhagavad-Gita (1 AD) is considered by some to be the New Testament of Hinduism. The Bhagavad-Gita is a dramatic poem which deals with the moral issue of killing people in war. This book had a good deal of influence upon the thought of Mahatma Gandhi.

Christians obviously have much to learn from the accumulated wisdom of a religious tradition that dates back 5,000 years. Throughout this century, the spirit of Hinduism has made its way to North America in the persons of Hindu spiritual teachers who have visited or settled here. Clearly their influence has been felt; for example, the widespread practice of yoga. But these Hindu teachers have also had at least some influence upon Christian methods of spirituality.

5,000 years ago in the Indus River Valley in the northwestern part of the Indian subcontinent
Adherents Worldwide:

The late Father John Main, a Benedictine monk based in Montreal, learned mantra-meditation from a Hindu master in India. Through Father Main's influence; thousands of Christians in Canada and other parts of the world have been taught this method of prayer.

The important dialogue between the Hindu and Christian faiths remains largely confined to India. Hindus have an appreciation of Christ and an openness to the Christian faith, but traditionally they have encountered major problems in dialoguing with Christians and Christian missionaries.

In the past, Hindus have experienced missionaries more as agents of Western cultural imperialism than as agents of Jesus. Indians who became Christians often had to adopt Western culture and customs, but in the process they were cut off from their own culture and people. This explains why the Indian government has made it very difficult for missionaries to enter that country.

This dynamic of cultural imperialism is a major obstacle in interfaith dialogue. Some Hindus are resistant to such dialogue because they fear that Christians are chiefly interested in 'converting' them. The mutual benefits of interfaith dialogue cannot be reaped unless and until both partners are considered equals.

There are an estimated 150,000 Hindus living in Canada. Most of these reside in British Columbia and Southern Ontario. In Toronto alone, there are 30 Hindu congregations.

In Canada there are a few small efforts toward dialogue between the two faiths. If you are interested in finding out more about Hinduism and about interfaith dialogue from the Hindu perspective, write:

Paul McKenna is a freelance writer living in Toronto. This is his second in a series of articles on world religions.