On January 1, 1994, an uprising by Zapatista rebels drew international attention to Chiapas, Mexico's southernmost state. The rebels, descendants of the Indigenous Mayan peoples, were protesting centuries of exploitation made worse by the North American Free Trade Agreement. The rebellion led to the militarization of the area and along with it, intimidation and assassinations, and a massacre of villagers such as in Acteal. 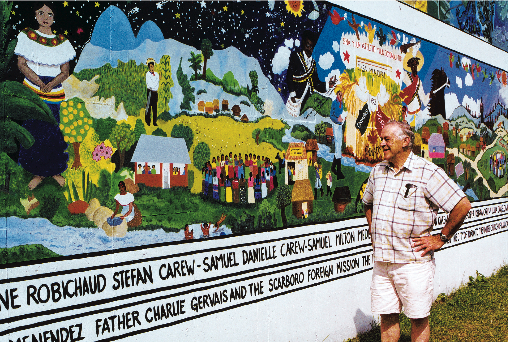 Media focus on this volatile area of Mexico continues from time to time thanks to Church leaders in the area who continue to stand in solidarity with the Mayan peoples of Chiapas.

In 1998, a mural was unveiled in the town of Taniperla in Chiapas. The mural depicted Mayan traditions and ideals of community life and represented peace, harmony, unity and happiness. It was designed and painted over a period of four weeks by members of 12 Indigenous communities in the area as part of a communications workshop with university professor Sergio Valdéz Ruvalcaba

The day after the mural was unveiled, Mexican armed forces occupied Taniperla and covered the mural in white paint. They arrested Professor Valdéz along with a human rights activist, Mr. Luis Menendez Medina, and five Indigenous participants. The actions of the security forces were perceived as an attempt to destroy the municipality's autonomy. Their actions also attest to the perceived power of art as a tool of social activism.

In an act of international solidarity, the Taniperla mural has been recreated in Argentina, Brazil, Spain, Italy, Ireland, San Francisco, Mexico City, and now in Canada at Scarboro Missions. Ingrid Mayrhofer is the program director of A Space, a Toronto non-profit art gallery, and a member of the Red Tree artists' collective. Ingrid contacted Scarboro Missions and asked if we would be willing to have the mural painted on the property of our headquarters in Scarborough, Ontario.

In the early 1980s, Scarboro missionaries worked in Chiapas and experienced firsthand the plight of the Mayan people. Bishop Samuel Ruiz Garcia of the Diocese of San Cristobal de las Casas was the bishop in Chiapas at the time, and invited us to come. From the very beginning Bishop Ruiz has stood in solidarity with the Mayan people. His support of their cause led the Mexican government to force the Vatican to remove him from Chiapas. As a gesture of solidarity, Scarboro Missions was privileged to cooperate in this mural project.

The mural, titled Greeting to Taniperla, was a community art project and part of the Community Art Biennale 2000. In addition to the original design, the mural also includes images representing issues affecting Toronto communities. Local artists Claire Carew, Hannah Claus, Sady Ducros, Lynn Hutchinson, Raffael Iglesias, and Shelley Niro, worked with 16 students from two Scarborough area high schools (Winston Churchill Collegiate and Alternative Scarboro Education 2) and with children from five elementary schools across Toronto. The mural imagery was workshopped at A Space Gallery in May and then painted on the walls of the handball courts at Scarboro Missions.

Professor Sergio Valdéz Ruvalcaba who had been imprisoned, and a young Mayan activist, Nicolás Gómez Pérez, came from Mexico last June to assist with the production. They were present at the mural's unveiling on July 2, 2000. About 250 people took part in the event, which included an interfaith prayer service with members of the Baha'i, Jewish, and Sikh faith traditions. As well, there was a Mayan ritual and dancing, with the troupe made up of Mayans who had immigrated to Canada.

Scarboro Missions would like to thank Red Tree for inviting us to take part in this meaningful act of solidarity. As well, we thank the following organizations: A Space Gallery, The Toronto Arts Council, The Canada Council, The United Church of Canada, the Canadian Catholic Organization for Development and Peace, The Alice and Grant Burton Fund (part of the portfolio of the Toronto Community Foundation) and other participants and volunteers who helped to make this project possible.