THE PROGRESS OF A POSTER

The Scarboro Missions Golden Rule poster is making its way around the world. What began as an obscure idea in the basement of Scarboro Missions' headquarters is now emerging as a 'coat of arms' for the international interfaith movement.

This striking and beautiful four-colour poster features a written and symbolic depiction of the Golden Rule in 13 religions. Scarboro Missions has been overwhelmed by both the success and the universal appeal of the poster. 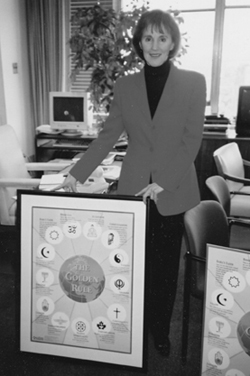 The Scarboro Missions Golden Rule poster is now on permanent display at the United Nations headquarters in New York City. On January 4, Gillian Sorensen (pictured above), Assistant Secretary-General of the UN, accepted the poster as a gift from the North American Interfaith Network.

The presentation was part of an interfaith ceremony in which it was pointed out that the Golden Rule is not just a moral ideal for relationships between people, but also for relationships among nations, cultures and religions.

Various institutions use the poster as a healing tool. For example, a network of addiction recovery homes in Calgary, Alberta, utilizes the poster in its programs. Jeff Archambeault, chaplain to North Bay Psychiatric Hospital in Ontario, has discovered some very creative ways to use the poster with patients and staff at the hospital. In the words of Archambeault, "this amazing poster just keeps on giving."

In the weeks following the September 11 tragedy, multifaith prayer services took place all over North America. Organizers of many of these prayer services used the Golden Rule poster in a number of ways in their efforts to promote forgiveness and healing.

Schools are the biggest audience for the poster, with accompanying lesson plans now being planned for elementary and high school classes. World religions classes find the poster extremely useful. Joe Wey, a teacher at Our Lady of Mt. Carmel School in Toronto, begins his world religions program with the poster. Says Wey, "Most of the students have studied only Christianity, so some of them are surprised to see the similarities among the religions...We teach not just tolerance, but respect for other religions."

In tune with Scarboro Missions' global vision, the poster is travelling the world. Fr. Tony Cereskos of the Oblates of St. Francis de Sales writes from Divine Word Seminary in the Philippines: "Thank you very much for the kind gift of the Golden Rule posters. We plan to have one framed for one of our classrooms. The message of the poster is very timely for the Philippines. As you are probably aware, Muslim-Christian relations here are very tense and problematic, especially in the South."

In the coming years, Scarboro Missions will join with people all over the world in translating the poster into several languages. Indeed, we have every reason to believe that this piece of theological art will continue to work its wonders in terms of interreligious healing, unity and reconciliation.

WHAT PEOPLE ARE SAYING ABOUT THE POSTER

Thank you for the time, energy, enthusiasm and artistry that went into developing and producing the Golden Rule poster. It has been our great pleasure to display the poster and donate it to organizations that find it helpful. I see the poster as a key resource for schools and for community group discussions.
Pauline Kay
Calgary Interfaith Community Action Association
Calgary, AB

When I first saw the poster, I stopped in my tracks. I was amazed at how quickly it had touched me even from my peripheral vision. The message of this poster is incredibly powerful in its simplicity. The poster manages to unite every corner of the planet with one essential statement.
Jennifer Bartok
Welland, ON

Earlier this year, we displayed your Golden Rule poster during our Multicultural Day at our Seniors Centre. There was tremendous interest in the poster's content and message.
Debbie Leith
Vancouver, BC

Early this morning, I passed through the airport here in Munich, Germany. When I saw your beautiful poster, I was so deeply touched in my soul that I immediately looked up your homepage on the Internet. How can I get one of these posters?
Konrad Goddemeier
Germany

Thank you very much for the Golden Rule poster. It's a real treasure to us. We intend to have it laminated and displayed in our main reception hall here at the consulate.
Chander M. Bhandari
Consulate General of India
Toronto, ON

The information on this poster is helping us to highlight our multifaith call to love another, a universal message of all faiths. Chaplains at our three hospital sites facilitate adult faith and life groups and we plan to use the poster in these sessions.
Recently, we displayed your poster outside our offices. We have had several comments from people representing many different religious and cultural backgrounds who affirm the message representing their respective communities.
Rev. Joan Silcox-Smith, Chaplaincy
North York General Hospital
Toronto, ON

The Connecting Project: A golden outreach to hurting people

Last year, on the feast of St. Francis (October 4), the Golden Rule poster was used to launch a multifaith project that invites members of all faiths to reach out to people who are hurting. 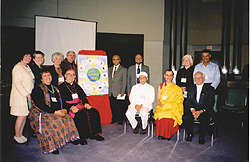 Members of all 13 religions represented on the Golden Rule poster pose with organizers of the launch of the Connecting Project. This creative project invites members of all faiths to reach out to people who are hurting. During the ceremony, the 13 representatives read aloud their version of the Golden Rule.

The Connecting Project encourages people to build a personal connection with at least one person who is outside the mainstream of our society: the elderly, the homeless or people isolated by poverty or disability.

One of the driving forces behind this creative project is Fr. Damien MacPherson (Society of the Atonement), director of the Office of Ecumenism and Interfaith Affairs for the Archdiocese of Toronto. Early on, Fr. MacPherson saw the wisdom of using the 13 versions of the Golden Rule as the ethical basis and centrepoint for the Connecting Project.

At the project launch, representatives of each of the 13 faith traditions read aloud their version of the Golden Rule (see photo to the right).

Although conceived in Toronto, the Connecting Project can easily be established anywhere in the world. For more information, contact Fr. Damien MacPherson at Tel: (416) 934-3400, Ext. 344 or Email: dmacpherson@archtoronto.org

Toward a global ethic

All over the world, thousands of people including educators, humanitarians and members of various religions are working to promote a set of universal moral principles. This effort to develop a universal ethic, which calls upon the wisdom of the world's many religions, considers the Golden Rule to be a key reference point. You can visit the Global Ethic website at www.global-ethic.org