To remember Deo is to remember a gentle and compassionate man who profoundly affected me. He was my mentor, not only in my interfaith journey, but also in the journey of life. 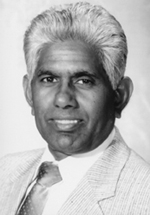 Immigrated to Canada: 1968 (with wife, Devi, and daughter, Dhristi)

I met Deo here at Scarboro Missions when he came to help us prepare for our first interfaith event. The event focused on Mahatma Gandhi's way to peace through nonviolence.

It was the first of many times Deo and I met, as he became a foundational member of our Interfaith Desk. He enabled us to relate to people of many faiths, including his own beloved Hindu people.

In a quiet way he shared his wisdom with us and accepted us not only as colleagues, but also as friends. Scarboro Missions owes much to Deo whose respect for us as an organization and as individuals blessed us on our interfaith journey.

I was privileged to attend a memorial for Deo at the Vedic Cultural Centre, a Hindu temple here in Toronto. Deo's daughter, Dhristi, thanked those who attended, and her words continue to stay with me: "My father," she said, "belonged to everyone."

I want to thank his wife, Devi, and daughter, Dhristi, for sharing Deo with me and with so many others.

In my journey to truth, to light and to immortality, I continue to feel Deo's presence. And, in a special way, I dedicate this interfaith edition of Scarboro Missions magazine to his memory.

A great soul has passed from our midst. Some people described him as the father of the interfaith movement in Toronto. But Deo Kernahan's compassionate vision stretched far beyond Toronto. Here was a truly global citizen whose life was a brilliant testament to interracial, intercultural, interreligious and international cooperation.

How to describe an individual who was loved and respected by so many; who challenged and supported so many in their life journeys; whose gentleness, passion, laughter and hospitality warmed the hearts of so many.

Like Mahatma Gandhi whom he admired and whose philosophy he studied and taught, Deo exemplified the very best of Hinduism. In fact, the setting for Scarboro Missions' first encounter with Deo Kernahan was a Gandhian educational event. In 1995, Scarboro invited members of several religions to comment on Gandhi's philosophy of nonviolence. Deo gave the keynote address.

This gathering sparked the creation of the Scarboro Missions Interfaith Desk. We were so moved by Deo's grace and charm that we invited him to join us in our interfaith journey. This was a wise decision on our part. In recent years, Scarboro Missions has been very successful in its interfaith endeavours. Much of our success is directly attributable to the wisdom and expertise of Deo Kernahan.

Deo's interfaith career took him to the Vatican twice. His second visit occurred in 1999 when 230 representatives of 20 religions converged upon Rome. This was the largest interfaith gathering ever convened by the Catholic Church. As guests of John Paul II, this multifaith contingent met to establish goals for interfaith cooperation in the new millennium. Here's what Deo said about the gathering:

"The Vatican conference on interreligious dialogue was a triumph of a Church that seeks to promote interfaith harmony. At this gathering, all religions sat as equals and shared their hopes that interreligious collaboration will forge a human family ruled by justice and peace."

Deo's death has left a vacuum in our midst. How to reconcile the loss of this beautiful Hindu man who walked with us? We are consoled that we can pray with and for Deo.

Pope emphasizes interfaith dialogue in the training of priests

In a message to the seminary directors of France earlier this year, the Holy Father called for a "solid formation" of future priests, and emphasized the importance of interreligious dialogue. The Pope stated that "the knowledge of Christ requires you to become involved – with generosity and determination – in solid human, spiritual, intellectual and pastoral formation." He went on to say that priests of the 21st century would need to learn skills in intercultural and interreligious dialogue.