All is well with the world

The night sky has always been a source of peace and tranquility for me. When I first arrived as a new missioner to Malawi last year, each night I would look up at the moon and the stars and feel a tremendous sense of calm before I went to bed, a sense that all was right with the world. 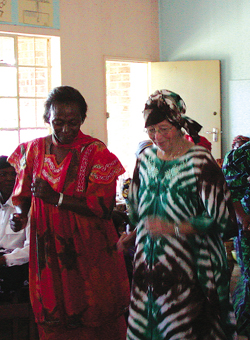 Malawians love to dance and they share this joy with all who are willing to learn. A few local women give lay missioner Betty Ann Martin her first lesson.

Soon after my arrival I went to the city of Mzuzu to live and teach at Marymount Secondary Girls' School, a boarding school for 550 girls from Malawi, Zambia, and Tanzania.

Starting a new job always makes me nervous, but starting one in a strange new country terrified me. When I walked into the classroom that first morning at seven o'clock, I was not prepared for the scene in front of me.

There were 70 girls, all with the same haircuts and regulation uniforms. The classroom was crowded with desks, so that I could not make my way from the front to the back because there was not enough room to walk. I was overwhelmed and when I tried to make it easier for myself by looking at the class list, I saw names that I was convinced I could not learn in this lifetime.

The more rattled I became, the more mistakes I made. I felt as if I had gone accidentally to the wrong class, and everyone in the class was too polite to embarrass this mzungu agogo (old white person) and tell her that she was not supposed to be there.

I arrived at the school just at the tail end of the second term, and the school break could not come soon enough. I looked forward to three weeks' of relaxation and settling into my new home. Unfortunately, it was during this time that I began to feel quite isolated. The word "lonely" took on a whole new meaning.

As the days got closer to the beginning of the third term, I did not know whether to be happy or sad. Which was worse, fear of the classroom or the loneliness of solitude? I prepared myself as best I could for the lessons ahead and when classes began I bolstered my morale by telling myself that it had taken a lot of courage for me to come here. 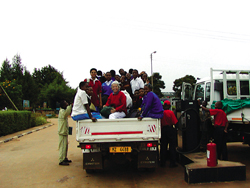 Betty Ann hitches a ride with other travelers. This is the usual mode of transport, second only to walking. Many Malawians will accept a ride and get on board if the vehicle is going their way.

On the second day of the new term, I was informed that each of the staff members was expected to be on duty one day of the week and it was my turn that day. Being on duty meant that the teacher, along with a colleague, would be available for any of the students' needs during the day and would supervise study hall from 6:30 to 8:30 at night. The latter would involve patrolling the school property outside to make sure that the girls were in the classrooms studying.

Mr. Chituzu (a tribal chief and a very colourful and well-loved history teacher) was on duty with me and we both had flashlights. I felt quite reassured that my first duty was with Mr. Chituzu because he had been at the school a long time and would show me the ropes. Unfortunately, he informed me just before study hall was to begin, that he had to give a make-up class in history and he would be on the far side of the building. So, I was left on my own to supervise the other 480 girls.

Everything went smoothly for the first hour. I checked on each class every few minutes and the girls were pretty serious about their studies. Then, the power went off and the school was in darkness. I headed to the classes of the youngest students to tell them not to panic and to guide them to their dorms.

When I arrived, several girls held lit candles. I immediately told them to blow the candles out, thinking what a terrible firetrap the classroom would be. I proceeded to the next class and they had even more candles lit. All the girls protested that this was standard procedure, but when I thought of 70 girls in each classroom, all the paper and wood and the single exit door, I knew that if there was a fire, the majority of them would never get out.

We came to a compromise; I would find Mr. Chituzu and go by whatever he said.

Having seen monkeys and snakes on the property, it was with much trepidation that I headed over to the other side of the school where Mr. Chituzu was teaching. When I drew close to the classroom, I saw 70 girls sitting quietly at their desks, each with a burning candle, and Mr. Chituzu reading to them, using his flashlight to see by. You could have heard a pin drop.

Without interrupting, I headed back to my classrooms. The girls, knowing what I would say, had already relit their candles and were studying more quietly than they had been when the power was on.

I sat on the steps outside and looked up at the night sky. The full moon was rising over the Marymount chapel and the stars shone brightly over the school campus. I listened to the night birds and crickets, and a feeling of calm and tranquility settled over me. I thought to myself, God is good and this is where I am meant to be.