Two years ago, Scarboro's China mission team celebrated Thanksgiving in Tibet. This was my first gathering with the whole group and I cherished my time with the team.

While I had visited quite a few temples in China, I never had the opportunity to speak with a Buddhist monk or to ask questions. In Tibet, monks are everywhere. They are very visible and eager to talk to you about their faith and religion. 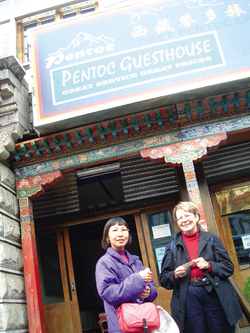 Scarboro missioners Cynthia Chu and Mary Lou Howard on a visit to Tibet. Mary Lou is now in Canada after completing her three-year contract with Scarboro Missions.

I was amazed at the many similarities between Buddhism and Catholicism. Like us, they have many rituals. They burn incense; they have votive candles; they touch tassels and other items just as we kiss and touch statues, icons and relics.

They say mantras on their prayer beads similar to our rosaries. They pray for the world and for the suffering souls. Some monks spend their life in contemplative prayer, as some Catholic religious orders do. A gong or chime is used to call the monks to assembly just as some churches ring the church bell to call the faithful to Sunday service.

Little children go to the temple for a blessing from the monk who will put a smudge on their noses. This reminds me of the ashes we get on Ash Wednesday, except that for Catholics this is done for atonement rather than for blessing.

In Buddhism, some statues look very kind and some look very fierce. The fierce look is to scare away evil spirits so as to protect the faithful entering the temple. Some statues have multiple eyes to indicate that they see the sufferings of the world.

Hierarchies abound among the Buddhas and the clerics, the lamas and the monks. There are many different Buddhas with different names and ranks. The god of compassion has many hands; sometimes two, or four, or eight, and upwards even to a thousand. The hands signify reaching out to those in need.

Buddhists fly prayer flags on their roof tops. Every time these flags are blown in the wind the family's prayers are carried to God with the wind. The imagery is beautiful. Prayer wheels do the same thing. Each turn of the wheel carries your prayer along on its way to God. The more turns there are, the more your prayer intensifies.

Of course, there are many differences between the Catholic and Buddhist faith traditions. For example, they believe that God does not save people. People are responsible for their own fate. If they do well in this life, they will live a better life next time around. If they do not live a good life, the next life will be worse. They believe in continuous re-incarnation until you attain the highest state-Sakyamuni-the highest-ranking Buddha. They pray to the god statues to help them do better, but not to make their lives better. They do not believe that the gods can change people's life situation.

I found Tibet to be clean, pristine, and spiritual. The people here pray all the time. Shopkeepers pray with their prayer wheels when they have no customers. People walk around the temples praying, as a pilgrimage, with some prostrating themselves again and again throughout the pilgrimage.

As I walked around the town, my heart warmed to see the elderly monks and the young monks spending time with their families, chatting and laughing. Buddhist monks can go home for a week or two every now and then, and the old ones can choose to retire with their families.

My Tibet trip was very fulfilling. I was touched by the people's spirituality. I learned so much about faith and especially about my faith. I loved every moment, every sight and sound, and every person I met. I am grateful for such a wonderful opportunity to see God from another perspective.