Another rainy day in Chengdu. Our weather seems to be a repetition of the same pattern: weeks of overcast skies, days of rain, hours of smog or fog, and a few moments of sun. Sunblock is not a popular item in the stores in Chengdu.

Yesterday, two of us who teach English at the university here, went by bus to the town of Long quan, 20 kilometers away, to see the peach blossoms. In spite of the lack of sun, the blossoms were beautiful. I was surprised to see that the peach trees were short with branches that spread out over a wide area. The short trees must make harvesting easier.

Like vegetable gardens and rice paddies, farmers plant the peach trees terrace-fashioned on the hillsides. Hidden among the blossoms of the peach trees, we discovered that the ingenious local people had set up open-air tea rooms, impromptu restaurants, card tables and 'pay as you sit' rest-stops. Since thousands of people travel to this area to see the blossoms, I wondered if the farmers get part of the profit.

On the day of our visit, the precarious footpaths leading to the tops of the hills were already well trodden. The atmosphere was like a festival. The colors of clothing, banners and balloons were as vibrant as the blossoms. Coupled with the variety of people was the aroma of freshly cooked food. A friendly mood was evident. People were in no hurry. No one seemed to mind stopping to allow the faster, younger and more sure-footed to pass, or to help those who needed an extra boost to make it to the next level. 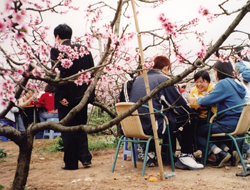 Visitors at a hillside rest-stop among the peach blossoms in Long quan, China.

Fortunately, our students had suggested that we pack a lunch. After climbing most of the way up the hill, we came upon a tea room nestled to one side of the footpath. Here we perched on slightly slanted chairs to enjoy our food and admire the view while tea was served. Below us was a sea of pink and white blossoms and a trail of weary pilgrims.

Continuing up to the peak, we were besieged by groups of students wanting to practice their English or to have photos taken with us, the foreigners. Finally, we said our goodbyes and made our way down the other side of the hill, away from the crowds.

Within ten minutes of our descent we realized that we had indeed left crowds, noise and entrepreneurs behind. We were still surrounded by the same natural beauty, but this time in a quiet and peaceful atmosphere. For another two hours we criss-crossed the terraced hills until we made our way down to the road that led around a lake and back to the bus station.

The station was crammed with young and old wanting to get back to the city. Although many were the same people who had walked the hills with us just hours ago, the atmosphere had definitely changed. Now everyone was pushing and shoving to get to the ticket counters.

Over the heads of the crowd a security guard beckoned for us to step to one side. Maybe he was worried that he might later have to explain to his superiors how two foreigners had been crushed to death while he was on duty. Or, maybe he felt sorry for us because we looked so pathetic. However, without saying a word, he officiously helped us to push our way to the correct counter to buy tickets, and then back to the other side of the room where he just as officiously opened a security door and pushed us through. We found ourselves standing on a platform directly in front of our bus. When we turned to thank him, he never smiled, but in broken English replied, "It was my duty."

As we approached Chengdu the poor weather did not seem to be so significant. It did not mar our wonderful memories of peach blossoms in China.

Sr. Jean Perry is a Sister of St. Joseph serving in China with Scarboro Missions.