An interfaith experience steeped in rich symbolism occurred when I had the privilege of participating in the burial ritual for a friend's mother. Nok is a Catholic and a staff member at the Good Shepherd Sisters' Children's Centre where I live. Her mother was Buddhist, and when she died all the Sisters and staff attended the three-day burial ritual. 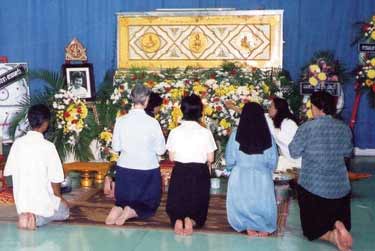 Praying with the monks and before the coffin at Nok's mother's burial ritual.

As we arrived at the Buddhist temple on the first day, Nok greeted us in tears and handed us sticks of incense. She led us to the coffin where we knelt, lit the incense sticks and prayed. The coffin sat on a high platform in front of which lay an abundance of yellow and white flowers. Tiny Christmas lights glittered among the flowers. Beside the coffin, Nok placed a picture of her mother.

The family gave each person a piece of red string symbolizing protection from evil. Some people simply held the string while others tied it around their wrist.

The time came to remove the body from the coffin, which is refrigerated because of Thailand's hot temperatures. They laid the body on a low table and Nok, the only daughter, began to dress her mother in traditional Thai clothing, symbolizing preparation for the journey after death. Nok performed this ritual gently and tenderly, her face filled with sadness.

Next began the purification ritual. Nok covered her mother with a blanket, leaving one arm exposed. As she held her mother's arm, each person in turn took a little silver goblet, dipped it into a bowl of water containing orchid petals and poured the water onto the mother's arm. This beautiful act symbolized the washing away of any hurt or wrongdoing in the past between the one pouring the water and Nok's mother.

After the purification ritual, the family placed the body in a smaller white coffin decorated with gold. They tied a string to the mother's wrist and put the other end of the string where the monks would be sitting for prayer the next day. At the end of the day, they placed the white coffin inside the larger refrigerated coffin.

The second day began again with prayers in front of the coffin. The monks took their seats and the family presented them with gifts. A young boy of about 14 years of age prostrated himself in front of the other monks. He started chanting with the most beautiful voice and the monks answered. The monks held four signs in front of their faces as they continued to chant. The signs carried the message that no one escapes death, a natural part of the human dimension.

After some time, the monks picked up the loose end of the string that was tied to the mother's hand and continued chanting. This ritual has great symbolic meaning, as it is believed that the prayers for the deceased follow the string to her.

The third day began with walking and chanting around the crematorium. We went around three times, each of us holding a piece of the string attached to the mother's wrist, all of us connected, our prayers combined.

I noticed two of Nok's brothers in monk's attire with head and eyebrows shaved. They did this to 'make merit' for their mother. Making merit is an act of sacrifice and atonement in the hope of improving the afterlife of the deceased.

Coconut water, considered the purest of water, was poured over the mother to symbolize her purification and readiness to make her journey. 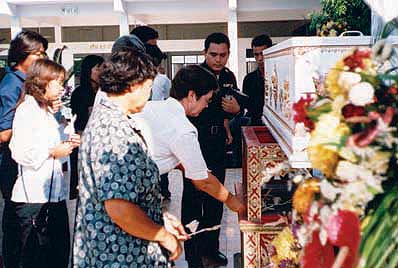 Joining other mourners, Sr. Fernande Barnabe places a flower beneath the coffin at the Buddhist burial ritual for her friend's mother. Sr. Fernande, a Missionary Oblate Sister, has been serving with Scarboro Missions in Thailand since 2001.

The family gave each of us an artificial flower and invited us to place it under the coffin before cremation took place. Nok's brother hastily removed his mother's picture and Nok led him away. They must not look back as this will hinder the spirit's efforts to find its way to the other world. Only after we could see the smoke coming out of the chimney did we begin to leave the temple.

The Buddhist burial rituals are rich with symbolism: the dressing of the body in traditional Thai clothing in preparation for the journey; the pouring of water on the person's hand for forgiveness; the string, conductor of the prayers for the deceased; the pouring of coconut water for purification.

Every culture wrestles with death and tries to give it meaning by using symbolism and rituals. What a blessing I received in taking part in the Buddhist burial ritual for my friend's mother.