During Lent 2003 Scarboro Missions reached out to many of the ethnic Catholic communities that have become part of the Canadian fabric in the last 50 years. Starting with Ash Wednesday, we welcomed several cultures to our chapel to celebrate Eucharist in their language, along with the songs and symbols that capture their story and the unique cultural expressions of their faith. Jamaican, Trinidadian, Guyanese, Latino, Bangladeshi, Filipino, Tamil, Japanese, Korean, Chinese, and Goan members of local Catholic communities came.

We prayed for global peace, peace in their countries of origin, peace in their Canadian communities, and peace in their families. As a Canadian missionary community, we named and recognized how Catholics from other cultures bring renewed energy, vitality and new ways of expressing Christian values within the Canadian Church and society. We affirmed and supported this missionary charism and hoped these gatherings would be just a beginning. 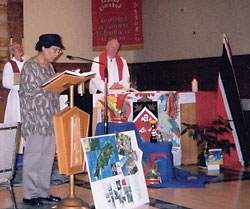 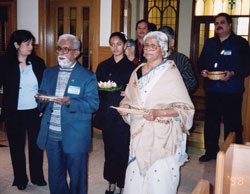 Participants at the Bangladeshi, Trinidadian, and Filipino masses, three of the many multicultural masses held at Scarboro Missions during Lent.

What Scarboro Missions did in Lent can be done in parish communities in major cities across Canada. As well, these celebrations can take place in a variety of ways in classrooms and auditoriums in every Catholic elementary and high school. To do so would enhance our own understanding of the word "catholic".

Across Canada, the cosmopolitan, multicultural nature of schools, parishes and communities needs to be named, understood and celebrated.

Caribbean nations with such diverse histories and cultures are generally listed as English speaking and are a significant grouping in many parishes and schools.

It is an interesting phenomenon that Muslim, Hindu, Jain, Sikh, and Zoroastrian people often choose to send their children to Catholic schools where they can be educated in a faith atmosphere and where in Ontario, specifically in the Grade 11 curriculum, the study of world religions is a requirement.

As a Church and as a society, Canada is experiencing a unique social and religious phenomenon. We need to celebrate the splendor and richness of diversity that we have. Here cultures and faiths that for centuries have been distant from each other now strive for harmony and co-operation in urban communities coast to coast.