KAIROS... At a crossroads with free trade

In a new ecumenical partnership, the Canadian Churches continue to work for justice, peace, and solidarity among all peoples

Sacred time. A moment of grace and opportunity, crisis and possibility. A God given time for conversion and hope. A crossroads in history when time is ready and prepared, in which God challenges us to decisive action.

The Lutheran theologian Paul Tillich describes the 'great kairos' as "the moment of time in which God could send his Son, the moment which was selected to become the center of history". In the Gospel of Mark Jesus says, "The time (kairos) is fulfilled, and the Reign of God has come near." According to Paul Tillich we re-experience this 'great kairos' whenever the "prophetic Spirit breaks through" and manifests the "history-shaking power" of the ever-present reign of God.

"Our present KAIROS calls for a response from Christians that is biblical, spiritual, pastoral and, above all, prophetic. It is not enough in these circumstances to repeat generalized Christian principles. We need a bold and incisive response that is prophetic because it speaks to the particular circumstances of this crisis, a response that does not give the impression of sitting on the fence but is clearly and unambiguously taking a stand."

Challenge to the Church-The KAIROS Document, 1985,
by a group of Christians in South Africa struggling against apartheid.


"In the same way as it was very clear to the whole world that apartheid was wrong in South Africa, now we need to develop a sense that global apartheid in trade and economics is wrong. This is not a technical argument-it's an argument based on the fundamental ethical consideration that it is wrong to have the kind of inequalities we see in the world."

Christians believe in the presence of God throughout history and that all circumstances provide ethical choices for action based on our faith. However, some times are significant moments of crisis and transition-the rise or fall of political or economic empires, the development of new technologies, the formation of new institutions or social structures. To recognize kairos we must search the 'signs of the times' and interpret them in light of Scripture.

The concept of kairos has motivated Christians around the world to act for justice, including Christians in South Africa in the struggle against apartheid and Christians in Central America struggling against injustice and repression. For those Christians and for Christians today, the very meaning and relevance of our faith is at stake in how we respond to injustice.

In July of 2001, KAIROS: Canadian Ecumenical Justice Initiatives was formed bringing together 10 previously independent Canadian inter-church coalitions with a commitment to justice work:

During the 1970s and 1980s, each of these coalitions arose as a collaborative response by the Canadian Churches to a perceived time of crisis and opportunity. For example, the Inter-Church Committee on Human Rights in Latin America (ICCHRLA) came together in response to the Pinochet dictatorship in Chile.

The coalitions stood in solidarity with oppressed people, spoke prophetically and acted within a vision of hope. However, increasingly their work began to overlap as the world became more interconnected. There were fewer people and fewer funds to support the 10 different coalitions. The majority of supporters believed it was time to bring the coalitions together into one organization. Many discussions and much work finally gave birth to the new ecumenical partnership, KAIROS: Canadian Ecumenical Justice Initiatives, and that long-haul work for solidarity and justice continues.

Scarboro Missions has supported and worked with the inter-church coalitions from their very beginnings, mainly in the areas of economic justice, corporate responsibility, and human rights. We have been enriched by the opportunity to work with and experience the insights of other Churches and religious congregations who share a concern for justice. Together we were able to raise a collective voice with greater capacity to influence governments and public opinion. Today, Scarboro Missions continues to support the work of KAIROS and collaborate with its education and action campaigns.

The FTAA: It's Hazardous to Your Health

Many Canadians first became aware of the Free Trade Area of the Americas (FTAA) in April 2001 during the Summit of the Americas in Quebec City. The FTAA proposes to extend the trade and investment rules of NAFTA to include all 34 countries in the Americas except Cuba, despite likely increased economic disparities and environmental degradation.

In 2001 an ICCHRLA Church leaders' delegation visited northern Mexico to document the impact of free trade policies on indigenous people, small farmers, maquila factory workers, and migrants. The following excerpts are from an open letter the delegation sent to Prime Minister Jean Chréen on the eve of the April 2001 Third Summit of the Americas in Quebec City.

...Our belief, as Christians, in the dignity of all human beings, the integrity of creation and the primacy of human rights, compels us to raise our voices now. We do so in the knowledge not only that economic policies supported by Canada have helped to create the suffering we witnessed in Mexico, but that your government is seeking to advance and extend those policies during the Summit of the Americas.

We are particularly concerned that if NAFTA is the model for the Free Trade Area of the Americas, as we have been led to believe, the same violations of human rights that we witnessed in Mexico, along with the premature death of children and adults because of poverty-induced chronic malnutrition, the destruction of forests, of the land, of families, communities, indigenous cultures and of the hope for a better future for all citizens, not simply a small minority, will be extended to other countries of the Americas...

The KAIROS Education and Action Program for 2002-2003 will continue its campaign FTAA: It's Hazardous to your Health until the end of October 2003. KAIROS's call to stop FTAA negotiations springs from the Canadian Churches' long-standing belief that international trade agreements must be based on the principles of human rights, environmental sustainability and economic justice.

The draft FTAA includes similar rules to NAFTA's Chapter 11, which allows foreign investors to sue national governments for compensation and overturn measures designed to protect human health and the natural environment. Corporations have successfully challenged Canadian restrictions on a toxic gasoline additive and on the export of PCBs, as well as a Mexican municipal ban on the construction of a waste disposal facility that threatened to contaminate local drinking water sources.

Attempts by provincial governments to broaden the range of publicly insured health care services, or to include services that are currently provided by the private sector (like pharmacare), would almost certainly open the door for private operators to sue for loss of profits. Governments would likely be forced to compensate private health care companies for loss of potential business, using taxpayers' money-making it difficult to introduce much-needed new services. 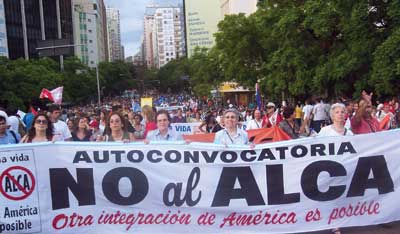 In January 2003, 100,000 people from 130 countries gathered at the third annual World Social Forum in Porto Alegre, Brazil, to envision another world. The FTAA (Free Tree Area of the Americas) was a major theme and protesters carried this banner at the opening march with the slogan, Yes to Life, No to the FTAA-Another Americas is Possible. A KAIROS delegation participated at the Forum and in that march.

The draft FTAA goes beyond the patent agreement in the World Trade Organization (WTO), which gives pharmaceutical companies exclusive 20-year monopolies to produce and sell their patented drugs. The FTAA provisions would make it more difficult for governments to grant generic drug makers licenses to produce affordable medicines. This threatens Brazil's national program of supplying free generic HIV/AIDS drugs to people with HIV/AIDS and would make it very difficult for other developing countries to start similar programs. The Canadian Council for International Co-operation outlines in their Trade and Poverty Series how this Brazilian program has decreased AIDS deaths by more than 50 percent and in three years saved the Brazilian government an estimated USD$472 million in hospitalization and medical care costs.

Across the Americas, citizens are mobilizing to demand that their governments reject the FTAA. In September 2002 more than 10 million Brazilians voted in a popular referendum on the FTAA, which had significant Church support and more than 98 percent voted against the agreement. In October/ November 2002 at the time of the 7th Ministerial Meeting of the FTAA in Quito, Ecuador, thousands of indigenous people, poor farmers, workers, students, environmental activists and others from Ecuador and across the Americas came to discuss alternatives and protest. The indigenous marchers from Ecuador's rural communities brought with them to Quito a 50-metre-long letter expressing opposition to the FTAA and putting forth alternative proposals. Other actions against the FTAA continue across the hemisphere.

As part of this Americas-wide movement, KAIROS will lead a petition campaign across Canada until the end of October 2003 to persuade the Canadian federal government to stop negotiations on the FTAA. The campaign is being carried out in partnership with Common Frontiers-a coalition of Church, labour, human rights, environmental, anti-poverty, development, student, and social justice organizations. Canadian petitions will be assembled with other signs of resistance from across the hemisphere and delivered to the trade ministers' November 2003 gathering in Miami.

Contact KAIROS to join us in this campaign before the end of October or sign up on line here.

Will this be a kairos moment for free trade? It will be one more step in a 30-year history of the Canadian Churches' work for justice in trade issues. Today there is greater urgency to work for change as trade rules have grown to impact more of our lives and contribute to an increasing 'global economic apartheid' between rich and poor.

Lay missioner Karen Van Loon coordinates Scarboro's Justice and Peace Office. Special thanks to KAIROS for the material used in production of this article.

You can become part of the KAIROS network

There are 100 KAIROS groups across Canada, and many more faith communities and individuals work alongside KAIROS. These groups may work on one issue, or take on a broad commitment to social justice, linking up with the KAIROS education and action program. Through the KAIROS network you, your place of worship, and your community can join others across the country and around the world in educating and acting for real change. Kairos program areas are: International Human Rights, Global Economic Justice, Ecological Justice, Global Partnerships, Canadian Social Justice, Aboriginal Rights, and Education and Animation. KAIROS is organized into five regions plus a francophone partnership. Contact the national office to find out how you can connect with KAIROS in your region.