In a non-Christian country, a Christian's words and deeds may be all that shapes others' understanding of our faith 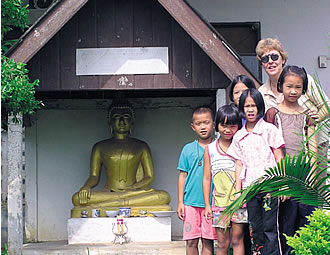 Susan Keays with little ones at the Camillian Social Centre. The Centre assists and supports Thailand's impoverished hill tribes by clothing, housing and educating their children during the school year.

Before being sent to mission, Scarboro lay missioners are often reminded of the value of regular theological reflection: "See, Judge, Act"-to see a situation, to judge what we see from a faith perspective, and to act as called for by our faith.

For me, judging situations was not easy when I lived in Canada. I find it even harder here in Thailand, a wonderful but very different culture. However, through the insights of others, God has provided me with moments of clarity to assist me in this reflection. One of these moments occurred within weeks of my arrival in Thailand, whose population is 95 percent Buddhist.

Members of Maryknoll (the US-based Catholic mission society) invited me to their central-house in Bangkok for dinner followed by a prayer gathering. The lay missioner who led the prayer session had chosen Interfaith Dialogue as the reflection topic. One by one, we began to tell our stories.

There was a story about a Hindu woman's encounter with a Buddhist; another about a Buddhist's reception at a Catholic mass. After several stories, there was a period of reflection before a young lay missioner shared her thoughts. She said, "Tonight as I sat here and listened, it came to me that the people in all your stories had experienced a member of another faith and then judged the entire faith according to that sole encounter. Based on a single exchange with a single member of a faith group, people had generalized that 'Buddhists are this way' or 'Catholics are that way,' and so on."

"And then it hit me," the young missioner said, "what an awesome responsibility it is to be a Catholic Christian in a Buddhist country. I may be the only Christian that some people here will ever knowingly encounter. Their entire understanding of Christians and of the God we worship will be based on what I say and how I act."

This was an epiphany moment for me. I know that we are called to model Jesus, but it became clear that there are times when my words might discourage rather than encourage; my actions might disable rather than enable. What I say and do could close doors rather than open them.

Now that I have begun my mission journey with the peoples of Thailand, I do not have the luxury of time for extensive theological reflection. I have to "See, Judge, Act" on the spur of the moment. But I can act now with more confidence, knowing that "I may be the only Christian that this person will ever knowingly encounter." What an awesome responsibility.