Jesus and other world religions

A Biblical approach to interfaith dialogue

Generally speaking, these are not questions that Christians have bothered to wrestle with throughout Church history. But the 20th century witnessed a profound shift in this regard. The growing international situation of religious pluralism combined with dramatic advances in biblical scholarship has pushed the envelope.

Throughout the world, more and more Christians are now studying the New Testament with these burning questions in mind.

The question of Jesus and other faiths inspired Scarboro Missions to convene two bible study sessions last spring. These gatherings attracted Protestants and Catholics from all over Toronto. Participants studied the New Testament in small groups, each working with a different text in which Jesus related to a person of another religion. After much wrestling with the biblical texts, each group shared its learnings and insights with the larger plenary. Consistent themes emerged.

One of the themes of the Bible is that God is a God of universal salvation-God's love and God's covenant extends to all humanity. We find this theme in both the Hebrew Scriptures and in the teaching of Jesus.

Jesus was aware of having been sent to the Jews: "I was sent only to the lost sheep of the house of Israel" (Matthew 15:24). But on occasion he crossed the boundaries of race, culture and religion.

On several occasions in the New Testament, Jesus affirmed the faith of individuals who were not Jews. He even presented non-Jews (pagans) as models of faith; for example, the Canaanite (Syro-Phoenician) woman whose daughter he healed (Matthew 15:21-28). Jesus was so amazed by the faith of the Roman centurion that he remarked, "Truly, I tell you, nowhere in Israel have I found such faith" (Matthew 8:10).

The parable of the Good Samaritan (Luke 10:29-37) contains a challenging interfaith message. The Samaritans were not Jews. Indeed, there was much animosity between the two groups. The Jews of New Testament times viewed the Samaritans and their religion as inferior.

But, as was his custom, Jesus used an anecdote to challenge the conventional wisdom. In the parable, it is the Samaritan-the outsider-who proves faithful, not the two religiously observant individuals who belong to Jesus' own faith group. The moral of the story is clear: God's love is universal-it is not restricted to any specific group, race, culture or religion.

When Jesus sat by the Samaritan woman at the well and even spent two days in her village (John 4), he was breaking a taboo-Jews were forbidden to have contact with the despised Samaritans.

During Lent of this year, Scarboro Missions will collaborate with the Christian ministerial association of the Scarborough region of Toronto in sponsoring six bible studies. These sessions will focus again on Jesus' view of other faiths and members of all Christian denominations in the region are welcome. 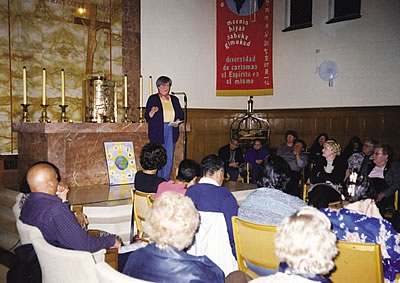 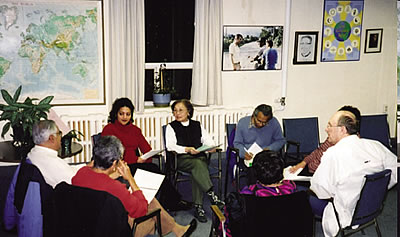 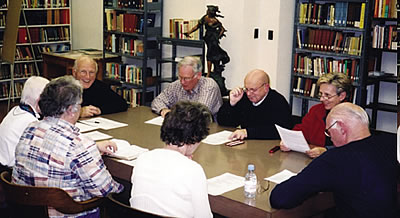 Protestants and Catholics wrestle with New Testament texts in which Jesus relates to persons of other faiths. Scarboro Missions convened two bible study sessions at its central-house in Toronto to examine Jesus' view of other faiths.