We are blessed to be present as Catholics and minorities in a Buddhist country. We work in Rayong, Thailand, with Camillian Father Giovanni Contarin at a Catholic relief centre for adults and orphaned children living with HIV/AIDS.

The Centre is open to people from all walks of life and all religions, and all are allowed to worship according to their own beliefs.

One morning, during my daily visits to the dying patients in the palliative care unit, I saw that a Buddhist monk had been admitted. In the Thai Buddhist tradition, monks are not permitted to touch women. As I approached his bed to talk to him, he instinctively pulled away for fear that I would hug him or hold his hand as he had seen me do with the other patients. I quickly told him that I knew I should not touch him.

I visited him daily and respected his tradition. Yet, I was surprised and pleased to see that at his deathbed he was accompanied by a Catholic priest and then by a female nursing assistant who held his hand until the end. God's love spans all faith traditions.

Thailand has a population of 67 million people, of whom 95% are Buddhist. The Buddhist religion is integral to Thai life and culture. Six Scarboro lay missioners work in Thailand where they encounter and celebrate God's presence in the life and faith of the people.

As Catholic Christians, my husband Paddy and I know that God works in mysterious ways and we have experienced this in a very special way.

Outside the door to the palliative care unit is a small alcove that housed Mary, the Mother of Jesus. Since we had so few Catholics at the Centre, Fr. Giovanni felt that the statue of Mary should be replaced with a statue of the Buddha.

Fr. Giovanni consulted many people at the Centre as to which Buddha would be suitable. Eventually he found the right one and placed it in the alcove. The patients and nursing assistants immediately began placing the appropriate cloth and flowers around the Buddha and in the alcove. It was wonderful to see the happiness this statue brought to the people. 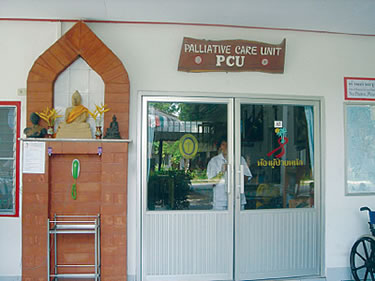 A statue of the Buddha sits in the alcove outside the palliative care unit at the Catholic relief centre in Rayong, Thailand, for adults and children with HIV/AIDS. The statue is a sign of welcome and respect in this predominantly Buddhist country.

Respect for other people's beliefs has brought only good to the Centre. Shortly after the Buddha statue was put in place, a first-time visitor was so impressed to see that a Catholic organization was open to his Buddhist religion and willing to help people of all faith traditions, that he donated 25 acres of land to be used for a children's centre.

Living as Catholics in a country that is 95 percent Buddhist (and 98 percent non-Christian) has given us a much better understanding of the feelings of people who live as a minority all their lives. We pray that we will always be open to people of all religions and do our best to accept everyone as a child of God.