Children of Abraham
“That you may know one another…..”

The International Conference of Christians and Jews in Istanbul last June brought together people of Jewish, Christian, and Muslim faith traditions engaged in interreligious dialogue

Thanks to the generous support of the Scarboro Missions Interfaith Department and my congregation, the Sisters of Sion (NDS), I was pleased to be able to participate in the International Conference of Christians and Jews (ICCJ) in Istanbul, Turkey, last June. It was a great opportunity to connect, reconnect, and deepen relationships with diverse persons and groups (Jewish, Christian, and Muslim) engaged in interreligious relations in many parts of the globe. The ICCJ organizes events particularly in the field of Christian-Jewish understanding, leading also to cooperation with Muslims with whom we share a common spiritual heritage as descendants of Abraham and our common concerns in the contemporary world.

Sr. Lucy Thorson (right, front) attends the workshop on women’s Issues in the Abrahamic Traditions during the International Conference of Christians and Jews (ICCJ) in Istanbul, Turkey, last June.

The coming together of more than 100 participants from 22 countries in a predominantly Muslim country was for me a sign of the new realities in our otherwise troubled world. Jews, Christians, and Muslims together have a significant contribution to make to changing attitudes.

The beautiful city of Istanbul, once known as Byzantium and Constantinople, offered a very chal-lenging venue for this international gathering. Istanbul is described as the most eastern city of the West and the most western city of the East. It is the only city in the world that spreads over two continents (Europe and Asia) and is a natural meeting place between cultures and religions.

During our conference we rediscovered the vitally important role that Istanbul has played in Jewish, Christian, and Muslim history. I was also delighted to spend a couple of days with our Sisters of Sion who run a French-language college in the heart of Istanbul where, through education, they have been building bridges among Jewish, Christian, and Muslim students since 1857.

The theme of the ICC} conference was taken from Sura 49:13 of the Koran which reads: "O humankind, we created you from a single pair of male and female, and made you into nations so that you may know one another...". Together as Jews, Christians, and Muslims, we spent four days in Istanbul exploring the potential but also the pitfalls of inter-religious dialogue, both bilateral and trilateral. There was no intention on the part of ICCJ of abandoning the specific dialogue between Christians and Jews, crucially important for so many reasons.

“We join all those who love the Land called holy by three interrelated religions [Judaism, Christianity, Islam] in being impatient for the day when it truly will be a sign of interreligious cooperation and even love between the nations of Israel and Palestine...let our impatience be tempered by having 'mercy upon words' so that through dialogue mutual understanding may grow.”

Statement of the International Council of Christians and Jews, Heppenheim, Germany, July 2010

On each of the days, a keynote speaker from one of the three religions addressed the overall theme of getting to know one another from the perspective of each person's own tradition. There were respondents each from one of the other traditions. Workshops dealt with a variety of related topics, such as exploring our common heritage through sacred text study, Islamophobia, anti-Semitism, and women's issues in the Abrahamic traditions. 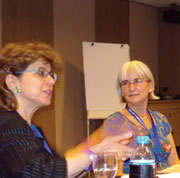 Above left, Suzannah Heschel, daughter of Abraham Heschel and Professor of Jewish Studies at Dartmouth College in New Hampshire, presents the workshop on women’s Issues in the Abrahamic Traditions. ICCJ 2010.

The morning of the final day was concluded with two interesting concurrent panels on controversial topics, one on Turkey and the European Union, the other on religion and the state. The afternoons pro-vided opportunities to get to know the rich diversity of Istanbul's religious and ethnic communities. These outings included visits to a Jewish museum and synagogue; the famous Blue Mosque, Hagia Sophia; and the Roman Catholic Cathedral in Istanbul. One evening featured the screening of a fascinating film on Turkey's role in saving Jewish lives during the Holocaust, which included the role of Monsignor Roncalli (later Pope John XXIII).

Among the multiple opportunities provided by the Istanbul ICCJ conference to "know one another better," I was struck by the presentation and workshop of Suzannah Heschel and the strong words she shared with us when she said: "For me to be a Jew is to think critically, not submissively. I cannot be Jewish in the way of past generations...What I receive, I must also transform."

I also found the insight and vision of ICCJ president Debbie Weissman from Jerusalem most encouraging when she said: "By holding the ICCJ conference in Turkey, precisely at such a challenging moment in history, the International Conference of Christians and Jews made a strong symbolic statement about the vital importance of interreligious dialogue." Yes, as children of Abraham, I feel that we are invited to continue to learn and to listen so that we may "know one another better."

Sr. Lucy works in the Interfaith Department of Scarboro Missions and is an executive member of the Christian-Jewish Dialogue of Toronto.