A spirituality of social justice

Theology walking on both feet

There is a similar theme running through Justice in the World, the great 1971 statement from the Synod of Bishops: “Action on behalf of justice and participation in the transformation of the world fully appear to us as a constitutive dimension of the preaching of the Gospel.” Preaching of the Gospel is taken to mean any word or action that gives witness to faith. The Synod states that “unless the Christian message of love and justice shows its effectiveness through action in the cause of justice in the world, it will only with difficulty gain credibility with the [people] of our times.”

Both personal and social

Spirituality is on the one hand personal, reaching to the deepest level of our being where God touches us and speaks to us. But it doesn’t end there. Spirituality is also social and requires a commitment to building the reign of God by transforming the unjust economic, political and social structures that cause suffering and deny people the right to have life to the full. This is the practice of social justice.

There are at least 150 texts on social justice throughout the Bible. A central theme is liberation from oppression: “Yahweh heard our voice, and Yahweh brought us out of Egypt with outstretched arm, with great terror, and with signs and wonders. He brought us here and gave us a land, a land flowing with milk and honey” (Deuteronomy 26:5-9). 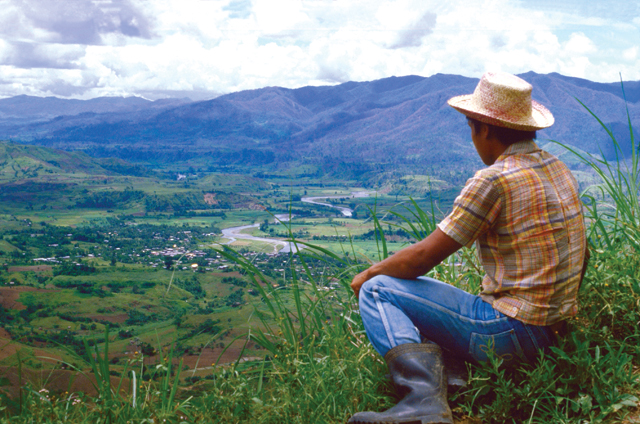 “The peasants who lose land or whose river is polluted by mining may not know the name of the owner or corporation threatening their livelihood. They certainly will not know which transnationals are buying the minerals, the politicians who signed the trade deals to facilitate its extraction, or the elusive corporate lobbying groups that successfully pushed through those deals.”

Susan George, “State of Corporations—The rise of illegitimate power and the threat to democracy”, a chapter from the Transnational Institute’s newly released report, State of the World 2014.

The laws concerning social justice were seen within the context of the covenant relationship between God and Israel. The Israelites had been a nomadic and semi-nomadic people struggling with the many challenges to their survival in desert conditions. To manage this, they formed strong communities in which they took care of each other’s needs. God’s promises were given to the people on the condition that they be faithful to the covenant. God promised that “there will be no poor among you…if only you will obey the Lord your God” (Deuteronomy 15:5). God’s gifts had a demand: share those gifts with the whole community. Nobody owned private property and the land, parceled out in equal sizes, could not be sold. The principle was meant to ensure that everybody in the society had a degree of security.

This is a God who sides with the poor, who liberates the oppressed. Our covenant relationship with God today is also expressed in our relationship with those in poverty. True holiness means to be faithful and to establish justice and right. What then does our faith tell us about our social and political responsibilities in these times?

Christ said, “I have come that they may have life and have it to the full.” Yet in the world around us there is a growing gap between rich and poor and global warming threatens all life on the planet. How can we experience community with each other and with the whole of creation when such injustices exist? We are not merely spectators in the drama of life. The Gospel calls us to become new women and new men in service to people and society, taking part in the conversation leading to a change in those structures that cause human suffering. This is clear in all the documents of the Second Vatican Council. One of the great social encyclicals, Octogesima Adveniens (#48), reminds us: “Let each one examine [ourselves], to see what [we] have done up to now, and what we ought to do. It is not enough to recall principles, state intentions, point to crying injustice and utter prophetic denunciations; for these words will lack real weight unless they are accompanied for each individual by a livelier awareness of personal responsibility and by effective action.”

A spirituality of social justice is concrete, not abstract; committed, not neutral; prophetic, not polite. With the power of the Spirit Jesus announced that he was the message of the prophets come true, “the good news to the poor” and “liberty to the oppressed.” Faith gives us the courage to denounce the unjust structures that cause poverty and suffering and announce the new vision of society. In the Magnificat, Mary praises God who scatters the proud, who puts down the mighty from their thrones and exalts the lowly, who fills the hungry with good things and sends the rich away empty. God is a God of action.

Living the spirituality of social justice is not an easy task. The process of action and reflection, of learning by doing and becoming engaged in issues often requires a conversion. Take for example the world trade agreements. How well do we understand them? Are we required to try to understand such seemingly complex issues? The answer is “Yes!” if we are to live the spirituality of social justice. With the advent of the World Trade Organization, we now have an unelected body making the rules for trade. These rules are written by the largest corporations in the world and are a Bill of Rights for the corporations who stand to benefit from them to the detriment of smaller countries, even to threatening sovereignty. What is perplexing is the willingness of politicians to support these corporations and take their side against the citizens of their own countries. This alliance points to a failure of governments to recognize their role as protectors of the common good—that is, the right to life and all that makes life more fully human, such as adequate food, clothing, housing, employment, education, health care, and effective participation in decisions; as well as safeguarding the integrity of all creation. What are these trade agreements doing to those in poverty? How are they affecting the environment and other life forms?

More than 45 years ago Pope Paul VI warned in his encyclical, Populorum Progressio (# 58): “the rule of free trade taken by itself is no longer able to govern international relations.” His main caution had to do with the inequality of market systems that allows the more powerful nations to dominate the weaker ones. There can be no free trade unless it is fair and based on justice. If the common good is one of the main purposes of politics, why do politicians hand the power given to them by the people to the wealthy elites and the corporations to perpetuate unjust structures? Most governments can make policy choices that free people from poverty, or they can choose to continue policies that perpetuate poverty. A spirituality of social justice leads us to question and challenge these situations.

Political action for justice means entering the public debate by posing ethical questions and alternative suggestions. Pope Paul VI stated in A Call to Action: “It is the role of Christian communities to analyze the situation in their own country, to reflect upon the meaning of the Gospel and to draw norms of judgments and plans of action from the teachings of the church and their own experience.”

In order to more fully understand the plight of the oppressed and those in poverty, we need to be present among them, listening to their stories—the stories of the hungry, the homeless, the unemployed, and immigrants, and become involved in their attempts to receive greater justice. By doing this we will understand better how we can change the situation either by joining groups or taking initiatives ourselves, not on behalf of the victims but in solidarity with them, standing with them. Some of the many groups and organizations through which we can act include KAIROS Canada, the ecumenical church coalition; and Development and Peace, the Canadian bishops’ development agency.

In the spirit of the prophets, we are called to denounce injustice and speak the truth to those in power. When we remain silent in the face of injustice we are on the side of the oppressors. Surely we can do our part to increase the voices for justice so that they cannot be ignored.

The Canadian bishops once described justice as “the political arm of love.” Social justice is the goal and political action is the means to attain that goal. Jesus asks us to read the signs of the times and to analyze the economic, political, and social structures that cause human suffering. There are many ways that we can live the spirituality of social justice.

Mary Boyd served for more than 21 years as Director of Social Action for the Diocese of Charlottetown, Prince Edward Island, and is active in several social justice organizations. In November 2013, Mary was named a member of the Order of Canada for her contributions to the social justice movement, particularly in the struggle against poverty, homelessness, and underemployment.

Working for the few

A recent report by Oxfam, Working for the Few, shows how extreme inequality is not inevitable, and gives examples of policies from around the world that have reduced inequality and developed more representative politics, benefiting all, both rich and poor. Oxfam called on leaders at the 2014 World Economic Forum at Davos (January 22-25) to make the commitments needed to counter the growing tide of inequality. The report gives a few sobering facts:

Archbishop Silvano M. Tomasi, Permanent Observer of the Holy See to the UN, at the World Trade Organization negotiations in Bali, December 2013, said:

“While the earnings of a minority are growing exponentially, so too is the gap separating the majority from the prosperity enjoyed by those happy few. This imbalance is the result of ideologies that defend the absolute autonomy of the marketplace and of financial speculation. Consequently, there is an outright rejection of the right of States, charged with vigilance for the common good, to exercise any form of control...An even worse development is that such policies are sometimes locked in through trade rules negotiated at the World Trade Organization or in bilateral or regional FTAs [free trade agreements]. Debt and the accumulation of interest also make it difficult for countries to realize the potential of their own economies and keep citizens from enjoying their real purchasing power. To all this, we can add widespread corruption and self-serving tax evasion...The thirst for power and possessions knows no limits. In this system, which tends to devour everything which stands in the way of increased profits, whatever is fragile, like the environment, is defenceless before the interests of a deified market, which become the only rule.”

Much of this statement is said by Pope Francis in Evangelii Gaudium (The Joy of the Gospel), issued in November 2013.