Believing in peace, educating and planning for peace, celebrating peace

In the Gospel of John we read that after the death of Jesus the disciples gathered in fear behind locked doors. Jesus came and stood among them and said, “Peace be with you.” What a joyful surprise for those consumed with doubt and grief.

As people of faith we believe that resurrection is possible, that peace is possible. Jesus fulfilled a vision of peace that includes good news for the poor, freedom for the oppressed, healing, wholeness, and abundant life for all. In our personal lives and relationships, in our communities and wider economic and ecological relationships, we are called to be faithful witnesses to this life-giving peace. This is not an easy path to follow. 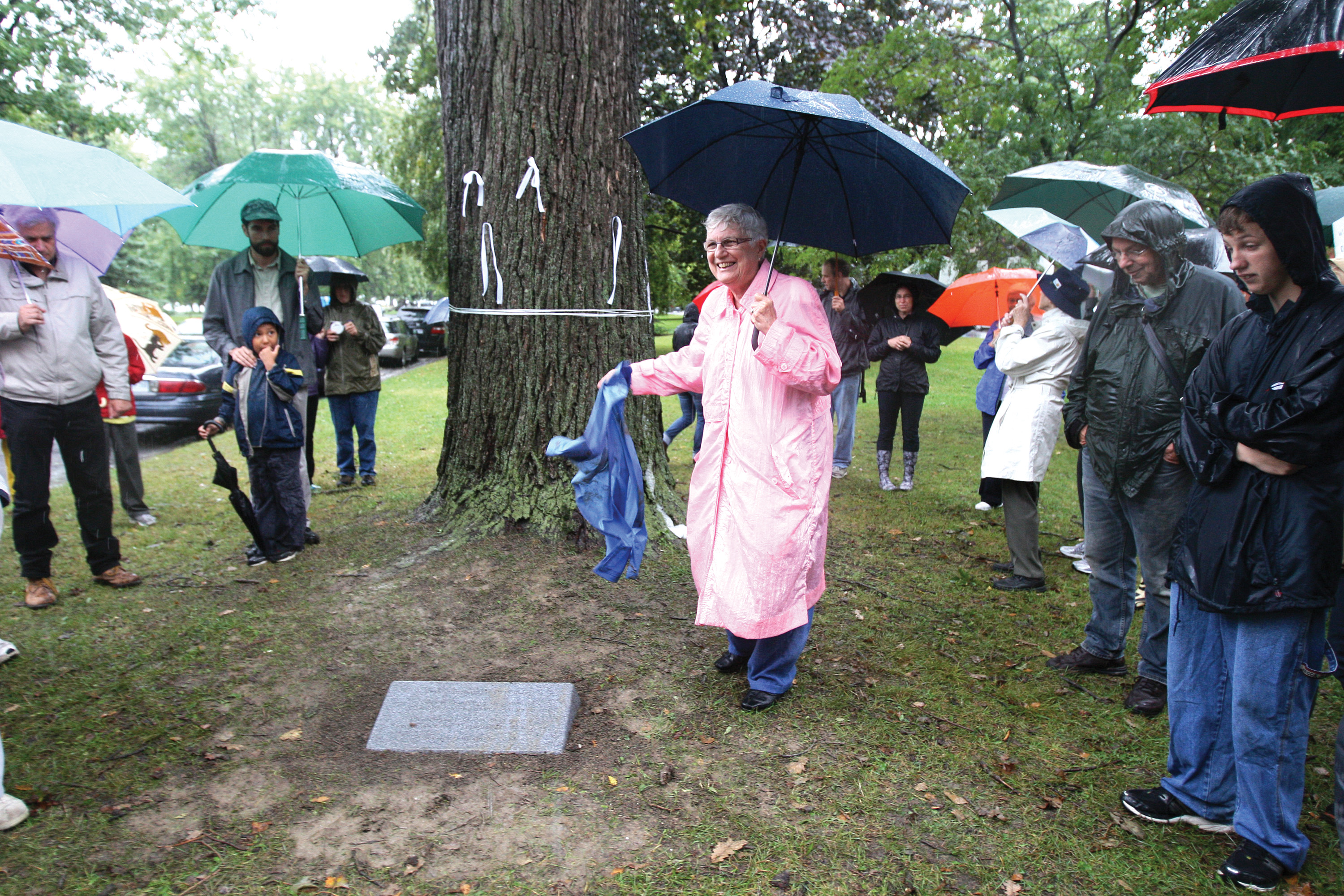 Photo Credit: Sr. Pauline Lally
Sister Pauline Lally of the Sisters of Providence of St. Vincent de Paul unveils a message carved in stone beneath a 100-year-old oak tree at the official launch of PeaceQuest last year at the City Park in Kingston, Ontario, on September 21, the United Nations International Day of Peace. The inscription in each of Canada’s official languages reads, “Grieving the tragedy of war, committed to the promise of peace.” Last July, the mayor and city council of Kingston passed a proclamation declaring September 21 to be Peace Day in Kingston and this too was read at the launch. The proclamation states that “the citizens of Kingston are all too familiar with the cost of war and cherish the value of living in peace,” and encourages “all citizens to do something positive to promote peaceful living in our community and our world.” Visit peacequest.ca to learn more. All photos for this article credited to Lars Hagberg/PeaceQuest.

Difficult paths are made easier in community, with support and solidarity, and so, too, peacemaking draws us to seek out others on a similar quest. This year is the beginning of the 100th Anniversary of World War I, “The War to End All Wars” (2014-18) and in 2017 we will mark Canada’s 150th year as a nation. Recognizing that such anniversaries are occasions for reflection and remembrance, the Justice, Peace and Integrity of Creation Office of the Sisters of Providence of St. Vincent de Paul in Kingston, Ontario, launched an initiative last year called PeaceQuest.

In 2012, the federal government spent approximately $30 million commemorating the 200th anniversary of the War of 1812 as a defining chapter in the history of our nation and “an unprecedented opportunity for all Canadians to take pride in our traditions.” This summer our government plans to launch World War commemorations to pay tribute to the sacrifices made by Canadians and will rededicate the National War Memorial. These official commemorations also aim to promote national pride and build awareness on how Canada’s participation in the First World War shaped our country and identity.

War is part of our Canadian story and world story. How we remember and tell the stories influences how we understand ourselves and the world around us. Will we focus on war in building our pride and identity, or will our stories, as PeaceQuest proposes, help us in grieving the tragedy of war and in remaining committed to the promise of peace? World War I ended with a staggering level of devastation and loss of human life—estimates vary, but around 9.5 million soldiers died as well as millions of civilians. This “War to End All Wars” did not result in a lasting peace but began the path towards World War II. For PeaceQuest, searching and working for peace are meaningful ways of honouring veterans and those who lost their lives during the war.

One of the goals of PeaceQuest is to reaffirm a commitment to peace as a core Canadian value. The initiative hopes to stimulate conversations across Canada about peace and Canada’s role in peacemaking, reconciliation, and social justice. Questions offered for discussion include: Should we lament or commemorate war? Can war create peace? What do Canadians want our military to achieve? How do we make peace so that we can keep peace?

One of the goals of PeaceQuest is to reaffirm a commitment to peace as a core Canadian value.

The volunteer organizers of PeaceQuest initially struggled to define peace and saw the need for conversation and dialogue on its meaning. A working description of peace has evolved: Peace is an active way of living, seeking to resolve conflicts cooperatively, respecting the wellbeing of the Earth and all peoples.

PeaceQuest brings together people and groups from different faiths and areas of the community. Anyone interested in questing for peace is invited to participate. A program of activities is being launched that will focus on learning about war and peace and on ways that peace can be promoted. It is hoped that this program could serve as a model for people across Canada who would like to undertake PeaceQuest initiatives in their own communities during these anniversary years.

Four streams of activity are developing: faith, education, policy and culture. Sister Pauline Lally of the Sisters of Providence explained how these streams flow together in the work towards lasting peace when she spoke at the 14th Annual Kingston Interfaith Service on New Year’s Day 2014: “We need to believe that global peace is possible and pray for it. We need to educate others and ourselves in nonviolence and peace-keeping. We need to plan, support and work toward policies of justice, for justice always precedes peace. If we want peace, we work for justice. And we need to celebrate and enjoy peace at all levels culturally.”

The PeaceQuest symbol is an inch-square piece of white cloth—the colour of hundreds of thousands of grave markers in wartime cemeteries. The blank white square, easy to make and wear, is part of the PeaceQuest effort to start conversations about peace by inviting people to complete the sentence: “In our quest for peace in the world we need to…”

The faith stream draws people together in the conviction that each faith tradition holds and cherishes peace as a value, inviting a journey of peace-making. People in Kingston are planning events such as Peace Pilgrimages, journeying from one sanctuary to another, holding vigils at cenotaphs connected with a significant event of WWI, and taking part in Circles of Contemplative Peace involving a peace-themed reading, contemplative silence, and optional sharing.

On December 5, 2014, PeaceQuest will hold a public commemoration in the Memorial Room at Kingston City Hall on the centennial of the famous Christmas truce when unofficial ceasefires took place along the Western Front. 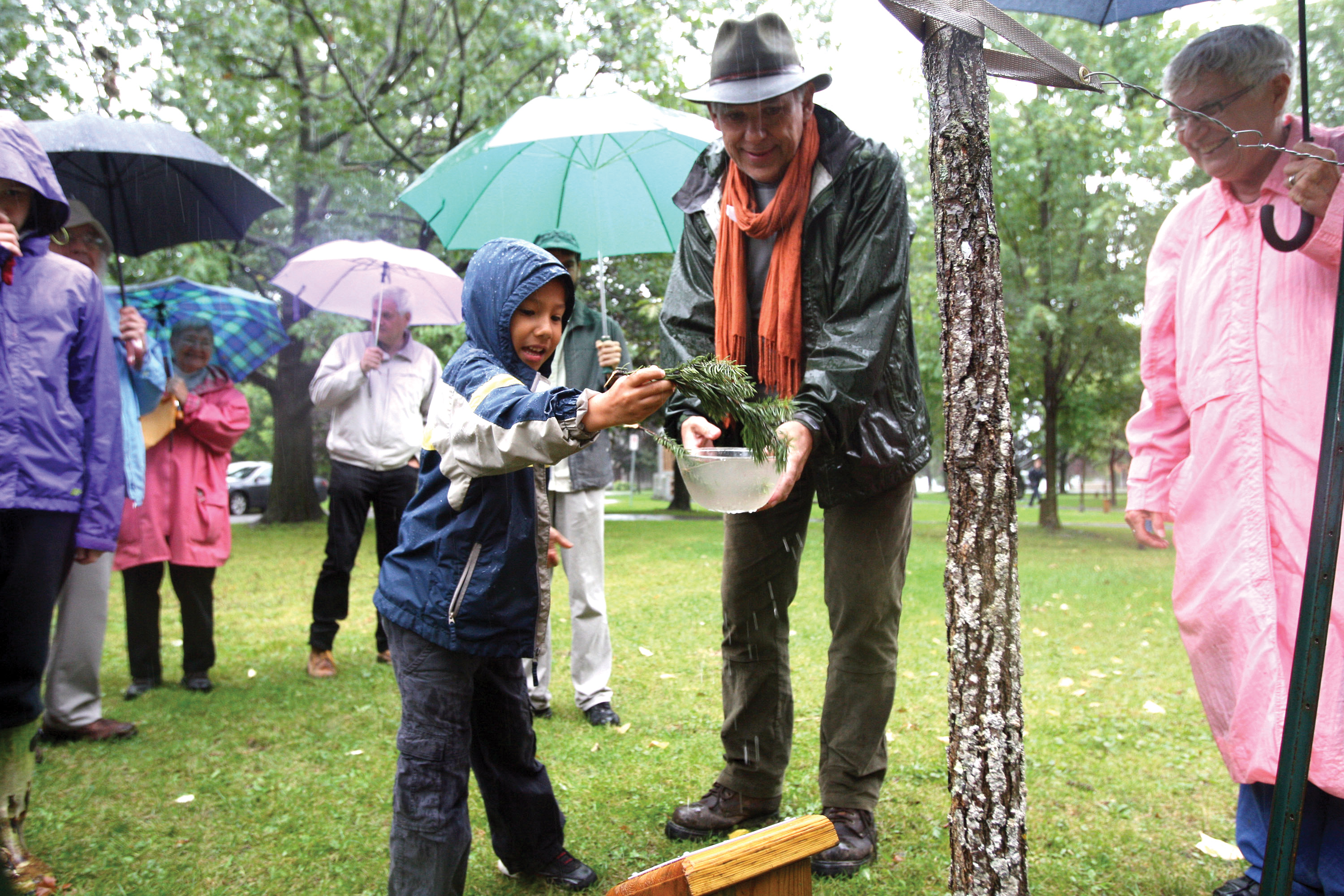 At the PeaceQuest launch last September, young Thomas McLaren, with some assistance from emcee Bill Penner, offers a few symbolic drops of water to a young oak tree planted beside the PeaceQuest marker. Despite the rain, more than 100 people gathered. Kingston, Ontario.

Under the education stream, PeaceQuest has provided peace education resources on its website (see box on page 7) and is collaborating with local school boards in Kingston to bring peace education into the classrooms. PeaceQuest also encourages, promotes, and partners in peace-themed events such as the Women Do Peace conference held in Kingston and the May 2014 conference at Saint Paul University in Ottawa on Nonviolence: A Weapon of the Strong (Mahatma Gandhi)—Advancing Nonviolence, Spirituality, and Social Transformation.

PeaceQuest is also working with cultural groups on activities that will animate community engagement and discussion. Artists, choirs, local theatres, book clubs, and other community organizations are encouraged to create or program peace-themed elements or works during the years 2014 to 2018. Activities include the Kingston Chamber Choir concert, Seeking Peace, and co-sponsoring of plays with local theatre groups. PeaceQuest also hopes to develop a template for a film series or festival that others could use.

Under the policy stream, PeaceQuest is connecting with the efforts of other organizations such as Project Ploughshares, which is working to promote a global Arms Trade Treaty. This treaty was approved by the United Nations General Assembly in April 2013 and more than 100 countries have signed it, including the United States. Canada, once a leader in arms control, has yet to sign. 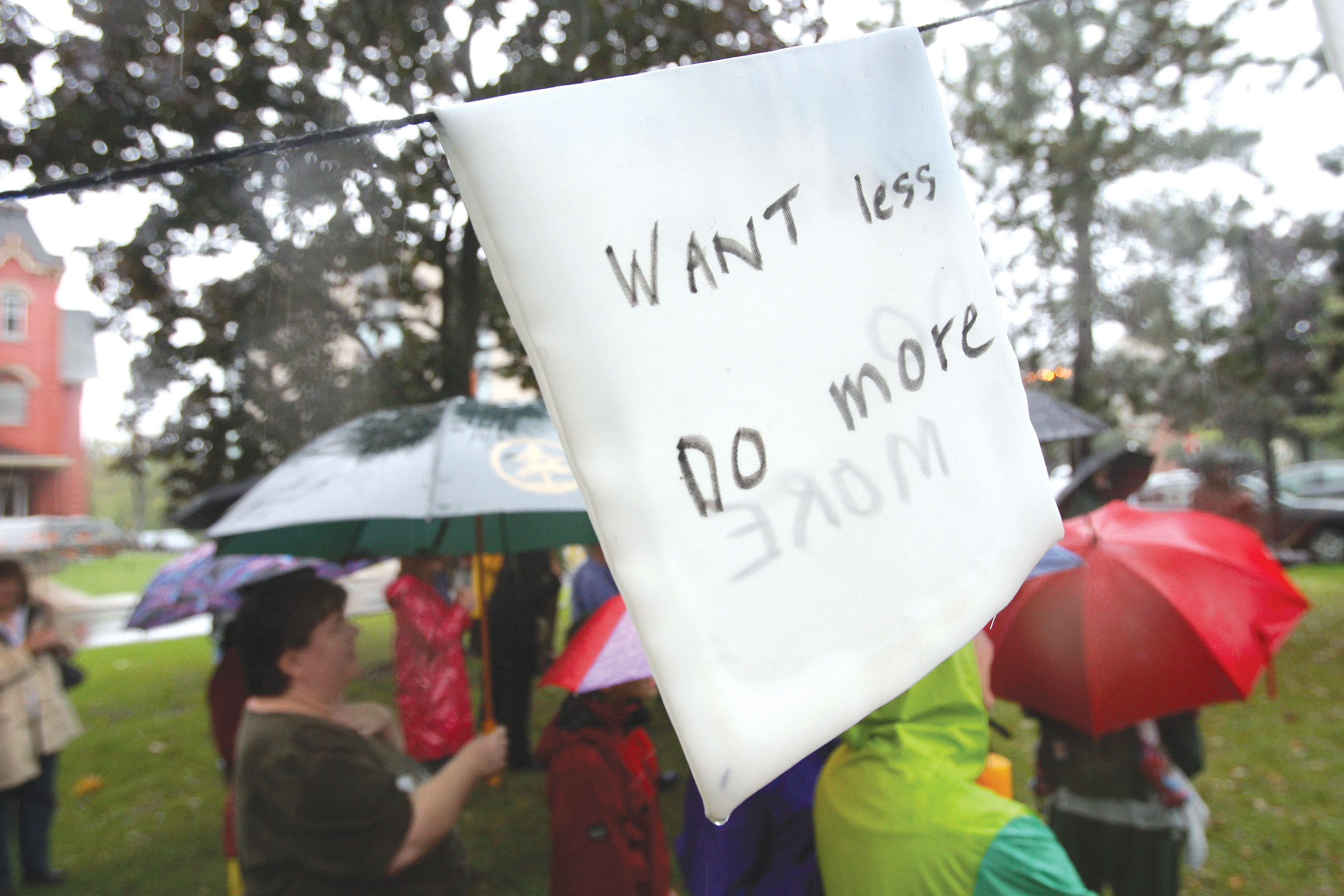 White flags designed by PeaceQuest’s Diane Fitsell festooned the park at the launch. Each sign completes the sentence proposed by PeaceQuest: “In our quest for peace in the world, we need to…”

In 2013 people began gathering in Ottawa to discuss the possibility of a local chapter and the Ottawa Chapter of PeaceQuest was formed. Cities, towns, and organizations across Canada are also invited to create a chapter. PeaceQuest is also working with peace networks in other cities and led an information session in Toronto earlier this year.

With a launch in Kingston, a military city, PeaceQuest welcomes the participation of the military community and expresses gratitude for the past and present service of the Canadian Forces and their families. Recognizing that there are shared values and differences, the intent is to be fully inclusive, inviting all to dialogue and discussion and building on common ground. Encounter, dialogue, and reflection are good ways to begin this effort to cultivate peace as a deeply rooted value, one that is reflected in our actions, in the education of our children, in our celebrations and stories, in our policies and commitments, and in our relationships near and far.

Unless we cultivate peace we risk drifting away from it, and with far greater consequences. Our ability to destroy each other and life around us has vastly increased since the days of World War I. Even the absence of war is not enough for a lasting peace.

Cultivating peace is like gardening. We have to care for the soil that nourishes the roots for a plant to grow. What feeds the roots of a lasting peace? A healthy environment, enough food and clean water, protection of the vulnerable, love and care, and many other elements that may be discovered by asking, “In our quest for peace in the world we need to…”

Peace is fundamental to our faith. The reign of God is the reign of peace. After repeating “Peace be with you” Jesus adds, “As the Father has sent me, so I send you” (John 20:19-21). We are called to continue the work for reconciliation, justice, and peace that Jesus began. Along the way we can collaborate with others who value and quest for peace. The way to peace does not lie in remaining in fear behind locked doors.

Karen Van Loon is the coordinator of Scarboro’s Justice and Peace Office.

Many thanks to PeaceQuest for the material used in the production of this article. Visit www.PeaceQuest.ca for more information.

Anyone interested in educating for peace can find many excellent resources on the PeaceQuest website. The senior administrators of the Algonquin and Lakeshore Catholic District School Board and the Limestone District School Board, both serving Eastern Ontario, have endorsed PeaceQuest and many of these schools are taking part in PeaceQuest activities. As well, a number of teachers are working with PeaceQuest in selecting and getting permissions for the best peace education resources so as to present them in a teacher-friendly format on the PeaceQuest website and on school board websites. If you are a teacher and would like to join this creative effort, please contact Judi Wyatt at wyatt.judi@gmail.com.

Currently available resources include:
PeaceQuest Education Stream: www.peacequest.ca/category/education/
Resources and lesson plans for different grade levels, with a focus on participating in the International Day of Peace, September 21.

Scarboro’s Golden Rule resources are also listed. The Golden Rule, “treat others as you would like to be treated,” has its roots in a wide range of the world’s cultures, religions, and philosophies and is a global standard for all peoples and nations in resolving conflicts and working for peace: www.scarboromissions.ca/Golden_rule/