(Dharma - the path to absolute knowledge.)

Buddhism was founded in the 6th century before Christ by Siddhartha Gautama, the son of a wealthy Indian king. To his followers, Gautama became known as the Buddha - the Enlightened One, the Awakened One. 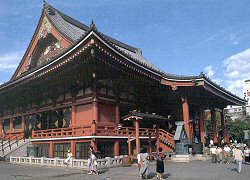 While still a young man, he left his palace, wife and family to lead the life of a poor, wandering monk searching for truth. His search climaxed six years later while sitting under a bo tree (sacred fig tree) in Northern India. It is there that he attained enlightenment - a state of peace and tranquility characterized by wisdom and compassion.

For 45 years he travelled throughout India teaching.what he had discovered. Attracted by his teachings, a huge order of monks sprang up quickly around him.

Under the bo tree, the Buddha became aware of a concept which he considered to be the central truth of human existence: only by extinguishing all selfish desires can a person ever hope to overcome suffering and find happiness.

Indeed all of the Buddha's teaching was geared to addressing the issue of human suffering and to alleviating it. And toward this end he offered both a diagnosis and a prescription: The Four Noble Truths and the Eightfold Path.

1. A person's life is filled with misery and unhappiness. This anyone can plainly see.
2. This misery and unhappiness is the person's own doing. It has been caused by desire, selfish desire and by the drive for private, individual fulfillment.
3. Selfish desire can be completely eliminated and therefore so can human unhappiness.
4. To eliminate desire, one must follow the middle way, living moderately and adhering to the eightfold path.

For the Buddha then, selfish craving is the direct cause of human suffering, but selfish desire can be renounced and the person set free. The way to this experience of liberation is the eightfold path, a system or technique of training which contains a series of correct dispositions and actions that the disciple must master. 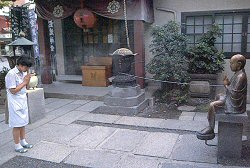 1. Right Knowledge - one must have knowledge of the Four Noble Truths.
2. Right Aspiration - one must be intentional, purposeful and determined with regard to liberation and enlightenment.
3. Right Speech - one's speech must be truthful and charitable.
4. Right Behaviour - one must demonstrate selflessness and charity.
5. Right Livelihood - one must seek an occupation that does not deter one's spiritual progress.
6. Right Effort - enlightenment demands tremendous exertion and discipline.
7. Right Mindfulness - alertness, self-examination and intellectual self-discipline are essential.
8. Right Absorption - one must develop correct methods of meditation.

The Eightfold Path is merely a means to a larger end, namely Nirvana, which is the ultimate goal of all Buddhist discipline.

When the process of self-seeking has been arrested and private selfcentred desire has been extinguished, the finite self is destroyed. Everything that previously restricted "the boundless life" has died. Nirvana is that boundless life itself.

The Buddhist concept of Nirvana as boundless or limitless life has a clear parallel in the Christian tradition. For Jesus, the Eternal is that experience of 'new life' that is born of a 'death to self.' And while the Buddha saw himself as a teacher who could guide the seeker into this experience of fuller life, Jesus presented himself as this new life itself: "I am the Way, the Truth and the Life" (John 14:6) or "I have come so that they may have life and have it to the full" (John 10:10).

For the Buddhist, this experience of boundless life involves union with Ultimate Reality. The Buddha did not relate to an understanding of God as personal, but Nirvana, one could say, comes close to meaning God.

Nirvana is a state of non- suffering, an interior realm of bliss or pure being wherein there is a complete absence of egocentricity. Nirvana is a ground of total selflessness and compassion, compassion for the poor and powerless as well as for animals and nature.

"When the people carried their puzzlement to the Buddha himself, the answer he gave provided a handle for his entire message.

Freedom for the Buddhist then, like the Christian, amounts to a life of total selfless service.

Buddhism remained confined to India until the 6th century AD when it was exported to China. By 1000AD it could be found in most countries in Asia. In the 20th century Buddhism has made its way to many other parts of the world.

Because the Buddha grew up in the Hindu culture of India, the religion he founded amounted to a reformation of Hinduism. But over the centuries Hinduism has absorbed the Buddha's reforms and as a result Buddhism has very little presence in India today.

Buddhism is divided into two main streams: Theravada and Mahayana. Theravada Buddhism, which is oriented primarily to a monastic lifestyle, is the more conservative of the two streams and it tends to adhere closely to the Buddha's original teachings.

Mahayana, the larger of the two sects, is more liberal and promotes a fuller participation of lay people. The Mahayana stream also places more emphasis on petitionary prayer, ritual and the value of relating to life in the 'world.'

"What is the most miraculous of all miracles? That I sit quietly by myself." - Zen Buddhist saying

In recent years we in the West have been hearing more and more about Zen, a Buddhist discipline that is beginning to influence Christians. What is Zen Buddhism and where did it originate?

Zen, an elaboration of Mahayana Buddhism, is believed to have developed in China in the 6th century. From there it spread to Japan where it thrived and has exerted an enormous cultural influence.

In recent years Zen has begun to touch the Christian west. Artists, writers, psychotherapists and philosophers have developed a keen interest in it. But more than this, some Christians are now beginning to study and practice Zen in order to enhance their spirituality.

Zen is a form of meditation that attempts to bring the practitioner to insight. Zen meditation emphasizes the intuitive and the experiential as opposed to the intellectual. Followers of Zen are suspicious of the intellect in terms of its ability to accurately grasp reality.

It's not helpful here to further describe Zen methods of meditation because as the Zen masters insist, Zen practice cannot be described or studied in books, it must be experienced. But something can be said of the fruits of Zen meditation.

The goal of Zen is "to bring the Eternal into the Now." Accordingly, eternity is not something that is to be experienced at the end of the rainbow; nor is if pie in the sky. The Eternal is a reality that can break into the ordinary day-to-day experience of the individual. Here we are reminded of the Christian mystical ideal of seeing and experiencing God in all things. One can thus live life daily with the awareness that one's every action is a manifestation of the Infinite. As Zen wisdom maintains: "If you cannot find the ultimate justification of existence in an act as simple as than of doing the dishes, you will find it nowhere."

"Both Christianity and Buddhism agree that the root of humanity's problem is that our consciousness is all fouled up and we do not apprehend reality as it fully is; that the moment we look at something, we begin to interpret - it in ways that are prejudiced and predetermined to fit a certain wrong picture of the world in which we exist as individual egos in the centre of things. From this basic ignorance which is our experience of ourselves as absolutely autonomous individual egos, from this basic wrong experience of ourselves comes all the rest. This is the source of all our problems."

Efforts at interfaith dialogue between Christians and Buddhists are currently concentrated in Japan, Sri Lanka and the United States. This important dialogue between the two faiths received its inspiration and impetus from the Second Vatican Council and the openness to other faiths that the Council promoted.

At the present time Christian-Buddhist dialogue is being conducted in the fields of philosophy and spirituality. Clearly the biggest contribution that Buddhism is making to Christianity is in the area of prayer, centering and meditation. Buddhists claim that persons of other faiths can benefit from Buddhist teachings and methods of meditation and still remain members of their own religion.

Indeed, more and more Christians are looking to Buddhist meditation as a vehicle to enrich their own tradition and to renew the early Christian contemplative tradition.

In the last 20 years, Buddhism has blossomed in Canada. As a result of Asian immigration to this country in the last couple of decades, there are now an estimated 200,000 Buddhists living here. But not all Canadian Buddhists are of Asian origin; many are former Christians and Jews.

With Canadian Buddhists originating from almost every nation in Asia, we have in our country one of the most diverse Buddhist communities in the world. Yet this diversity is at the same time a source of struggle because of dramatic differences in language, ethnicity and nationality. Buddhism is struggling to adapt itself to Canadian culture. Its adherents are intent upon developing a Buddhist wisdom that is uniquely Western, a wisdom that will enable them to address, from a Buddhist perspective, the very real problems in contemporary Canadian society.

Beginnings:
530 BC in Northern India

Major locations:
All countries of Asia except India where, historically, Buddhism has been absorbed by Hinduism.

If you are interested in finding out more about Buddhism and about the Buddhist approach to interfaith dialogue, contact the following: