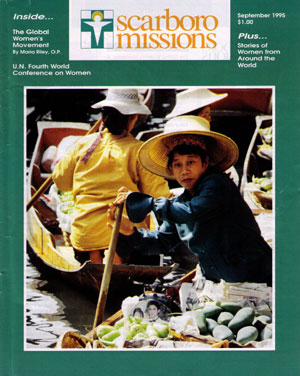 In a 19-page letter issued in July of this year as a "sign of solidarity and gratitude on the eve of the Fourth World Conference on Women", Pope John Paul II spoke of "the dignity and rights of women" and thanked women "for all that they represent in the life of humanity." However, we are all heirs, he said, to a history of conditioning which has been an obstacle ot the progress of women. "Women's dignity has often been unacknowledged and their prerogatives misrepresented; they have often been relegated to the margins of society and even reduced to servitude." And, he continued, "if objective blame, especially in particular historical contexts, has belonged to not just a few members of the Church, for this I am truly sorry."

However, while praising the "genius of women" and their contributions to the progress of humanity, the Pope defended the Church's opposition to women priests, saying that Jesus Christ chose only men to be an "icon of his countenance as shepherd and bridegroom of the Church." The Pope also denounced sexual violence, and at the same time reiterated his opposition to abortion, saying that "the choice to have an abortion always remains a sin," even in cases of rape, "a crime for which guilt needs to be attributed to men and to the complicity of the general social environment."

The Pope also expressed admiration for those "courageous" women who have devoted their lives to fighting for women's basic social, economic and political rights. "As far as personal rights are concerned, there is an urgent need to achieve real equality in every area: equal pay for equal work, protection for working mothers, fairness in career advancements, equality of spouses with regard to family rights and the recognition of everything that is part of the rights and duties of citizens in a democratic state." In his words, "the great process of women's liberation... must go on!"