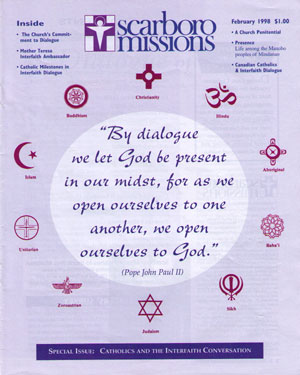 Scarboro Missions wishes to thank Paul McKenna for his work in coordinating and compiling this issue. Paul lives in Tottenham, ON, and is a freelance writer and consultant specializing in world religions and interfaith dialogue.

In our January '98 issue we included a Readers' Survey and asked you to help us by completing and returning it by the end of February. However, after the January issue was printed, problems arose which delayed its mailing until late January. Because of this, we have extended our Survey deadline to the end of April. This survey is very important to us and we thank you for taking the time to give us your feedback.