On April 7 of this year, Fr. John Harvey Steele quietly passed away at Scarboro Missions central house in Scarborough, Ontario. He was 88 years of age. Only a few hours before his death he was seen walking in the hall outside his room. He had not been well over the past several years but had kept active, his keen mind interested in current events, especially politics and what we call Church politics-events within the local and world Church.

He would become excited about one event or another, one issue or another, and would love to engage in a conversation, making sure to let you know his opinion and how he felt about it.

Fr. Harvey loved to read and in his final years was keenly interested in the meaning of life, of human existence, of God, and of course, about death and its meaning. In one of his many notes he muses about death: 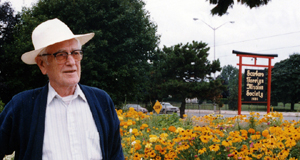 Fr. Harvey returned to the Dominican Republic in 1985 to celebrate an anniversary Mass for Scarboro missionary Fr. Art MacKinnon, martyred there in 1965.

"I disagree with that slogan about the dead: Rest In Peace (RIP). I expect and hope that if I make it, even as a backbencher in eternal life, I will be much more active than I have been in this life. Looking forward to long chats with my guardian angel-how often he saved me from danger, yes, even death; then chatting with the many I knew in this life; and even perhaps, knowing other intellectual beings who may be inhabiting other planets; and above all, knowing my Creator.

It will be a great, enjoyable, active life. I will not be burdened with this body... So wonderful to be free, with or near God and friends-all love, all true."

When he died, Fr. Harvey had few possessions. In one folder we found some of the things he valued:


Fr. Harvey published several books and left a number of unpublished manuscripts. Having started his priestly life in China, he never lost his interest in that country and left a manuscript which he said was the best of everything he had ever written.

After China he spent time in Antigonish Diocese where he served with Fr. Jimmy Tompkins, a leader in establishing cooperatives and credit unions. At that time Fr. Tompkins was involved in a builders' cooperative where young families would pool their labour and buying power to build their first home. One housing co-op in Reserve, (Cape Breton) Nova Scotia, named a street Tompkinsville to honour Fr. Tompkins who, along with fellow diocesan priest Moses Coady, pioneered the now worldwide Antigonish Movement.

Although his time with Fr. Tompkins was short, Fr. Harvey was greatly impressed by this man and held him in high esteem. Fr. Harvey saw the cooperative movement as a way to help ordinary people to a life with some dignity. Growing up in a coal mining town, he had seen the poverty and struggle of the miners. Fr. Tompkins showed him a way to help.

The frustrations in his work would have broken anyone not possessing an extraordinary degree of courage and commitment. Over and above the endless travel back and forth across the country, and the countless classes and meetings that he conducted, Fr. Harvey repeatedly suffered the truly heartbreaking disappointments of having his work undermined and partially destroyed by some who misused the credit unions to defraud the very people he was trying so hard to help.

Because of the unsettled political situation in the Dominican Republic in the late 50s and early 60s, Fr. Harvey was 'advised' to leave the country. His experience only strengthened his resolve to work for the poor and in 1964 he established a study centre in Panama to educate Latin Americans in the cooperative movement. This centre, the Interamerican Cooperative Institute (ICI), has since graduated close to 3,000 men and women from nearly 800 organizations involved in grassroots development. They return to their villages and towns to put into practice the methods and ideals Fr. Harvey had experienced as a young missionary in his hometown of Dominion in Cape Breton, Nova Scotia.

The establishing of ICI was Fr. Harvey's greatest achievement and I believe, the one of which he was most proud. It remains a centre where human dignity and justice are the pivotal and motivating factors. It was Fr. Harvey's ultimate expression of his concern for the poor and for justice in their lives.

Fr. Harvey was a rebel, a dear old rebel, who helped to make the world a better place and whose passing leaves an empitness in our lives and in our hearts.

In 1973, a well-known Catholic writer, Gary McEoin, published Agent for Change, a biography about Fr. Harvey. In 1969 the government of the Dominican Republic honoured Fr. Harvey for his work in cooperatives. More recently he received an Honorary Doctorate from St. Francis Xavier University acknowledging his work in the cooperative movement. In 1990 Canamedia Productions produced a half-hour television program, Padre Pablo-Fighter for Justice, which aired on CBC's Man Alive and told of Fr. Harvey's work in cooperatives and credit unions. In 1993, Fr. Harvey wrote a short autobiography, Dear Old Rebel, in which he told about his life as a missionary, especially his China experience.

Fr. Harvey was both tough and forthright, qualities which he respected and valued in himself and in others. Some people had difficulty with this side of him, but for his friends, these qualities made Fr. Harvey who he was. You always knew where you stood with him; there was never any pretence. He had a keen intellect and his mind was sharp and clear to the very end. He used to joke that this was due to the Scotch he drank!

Fr. Harvey questioned everything and was not enamoured with authority of any kind. He was a maverick who called his own shots, doing what he felt was important with or without the approbation of others. He questioned his Church, but his faith was a deep and simple faith, the essence of what he had received from his parents.

Fr. Harvey lived here with us at Scarboro Missions' Canada headquarters for most of the past 24 years. Despite his being 'crusty' at times, he endeared himself to many of our staff and to many of his Scarboro brothers and sisters. Underneath his independence, his sharpness and his bravado, was a loveable man who wanted to be loved. Indeed, Fr. Harvey was a rebel, a dear old rebel, who helped to make the world a better place and whose passing leaves an emptiness in our lives and in our hearts.

The Mass of the Resurrection was celebrated on April 10 in our chapel, presided by Scarboro Superior General Fr. Jack Lynch. In attendance were many friends and family, including five of Fr. Harvey's sisters and brothers. The homily was given by Fr. Joseph Curcio who had encouraged and helped Fr. Harvey to put into writing his life's experience. Burial took place at Mary Queen of Heaven cemetery for clergy on the grounds of St. Augustine's Seminary in Scarborough, Ontario.