THE MEASURE OF AN OPPRESSED PEOPLE

In Latin America, a favourite form of gambling is the cock fight. Men acquire and train bantam-size roosters and train them to fight just as trainers do with boxers. However, the Latin Americans say, "It isn't the size of the rooster in the fight that matters, but the size of the fight in the rooster!" This is the measure of the oppressed people of Haiti, yesterday and today. Their power is faith in God in a Godless social structure. This little essay is dedicated to them.

I am one of the many Scarboro missionaries who have worked in the Dominican Republic. Haitians were there to harvest sugarcane. Many were members of our parishes.

About 25 years ago, I was pastor of a very large area on the eastern tip of this island republic. It included an extensive area for sugarcane. The Haitian canecutters were there in large numbers. Some stayed all year round having brought their families with them. This usually meant that the women and children helped increase the amount cut and consequent income. But most men left their families behind in Haiti and returned to them after each harvest.

The Universal Declaration of Human Rights

In our parishes, the canecutters lived in what are called "batayes," which is taken from the Haitian language meaning "gathering of houses." It is a sort of barracks planted in the cane fields, mere wooden boxes with neither furniture nor facilities.

These Haitian men were, in reality, slaves in the literal sense of that word.

The cane cutters drew wages from the sugar producers (nearly all owned by the state). The company store was their only supply centre where they could get credit-important for them since their pay was insufficient. As well, in order to get an honest weight for the cane they cut, they had to pay bribes to those who weighed the cane. With all that, there was very little cash remaining to take home at the end of the harvest. The final blow was the payoff to the Dominican border guards to allow them to take Dominican money and goods back to their families in Haiti without a hassle. Of course, all this had nothing to do with the law nor human rights.

There were other Haitians who managed to meld into the Dominican scene, marry, and become Dominicans. Such was the life of the Haitians I have known.

There was one Haitian in my parish who had experience as a catechist in Haiti. I employed him as catechist to other Haitians living in the parish. I shall never forget him. His name was Tid Toulouse. Each year he would return to the Dominican Republic to cut cane, usually leaving his wife and three children in Haiti. Their village was located a day's walk directly west of the border town of Pedernales. 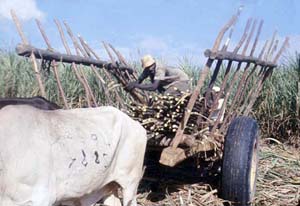 Stacking the sugarcane after it's been cut.

For my last three years in the Dominican Republic I was stationed in Padernales. It was the point of entry and exit for the Haitian labourers. So it happened that Tid would pass by. Of course, he would visit with the priest there. What a great surprise it was for us to meet again!

We talked and enjoyed each other's company. He spoke with wisdom and explained many things. Let me tell you this wonderful story about his family. I remember it well.

One of his trips back to his village in Haiti was very special for him. Weary and worn, he arrived to find that his wife was not well and that she had just given birth to a fourth child, a boy, who was very sick. A visiting nurse prescribed a special medicine. What to do? The child was baptized within a Eucharistic celebration. But Tid was worried. During the Prayers of the Faithful his eight-year-old Bernadette stood up: "Bon Dieu, please get the medicine that my little brother needs, and he needs something to play with too, right away. Let us pray to the Lord!"

As Tid related the story, I can still see the big smile and teeth brightened by the chewing of sugarcane.

"After Mass," he continued, "the caretaker was waiting for the priest to leave the altar. When he did, the caretaker told him that a parcel had arrived for him at the house. Well, the priest went immediately, wondering what the parcel might contain. The people followed him, crowding around the table where, sure enough, there was the very medicine my baby needed! Little Bernadette, without permission, put her hand into the box and searched for 'something to play with' for her little brother, just as she had asked during Mass. Well, you guessed it. She found a rattle, as well as a few other things for babies. I shall never forget the goodness of the Lord!"

Tid's story is indicative of the prayer life of the people of Haiti. Tid Toulouse saw here the hand of God. The authors of Sacred Scripture had the same vision, the same spirituality, we might say. The power of and the need for Divine intervention is so clear when one stands at the receiving end of the big stick of poverty and oppression, when one is powerless, when one is humiliated.

The men of Haiti fought back. They died. They were jailed. They were exiled or persecuted. The women of Haiti generally carried on alone suffering all hardships for the survival of their children, their country, their faith.

But the time of healing is surely now at hand. We know that it is when they are pushed to the edge of survival by their grief, their powerlessness, their thirst for righteousness, their search for peace, their frustrations; it is there and then that God comes to bring healing, justice and peace. They, with the power of God, shall overcome! Blessed are those who suffer persecution in the cause of right; the kingdom of heaven is theirs.