PERSEVERING IN THE STRUGGLE 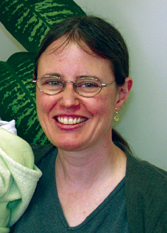 Working in Scarboro's Justice and Peace Office here in Canada seems very far away from the rural area of Itacoatiara in the Amazon, which I left in February of this year. Yet every time I eat fish the memories of life there resurface fresh in my mind.

Shortly after my arrival in 1995 I began visiting the village of Sao Joao do Araca on the Arari River, a tributary of the Amazon. It was then the only rural community active in the Children's Pastoral, a preventative health ministry I had begun to accompany. There I met Maria de Socorro Rodrigues da Silva, a community leader involved in the struggle to preserve the lakes and fish in the area. Socorro taught me about the life and struggles of their community and the rural area.

People here survive mainly on manioc root, which the community uses to produce the local food staple called farinha, and on fish. There are laws to protect the fish stocks; however, IBAMA, the Brazilian Environmental Institute, doesn't have enough people to enforce these laws. So commercial fishing boats from the cities of Manaus and Itacoatiara as well as the state of Para, continue illegal fishing in protected lakes. Commercial boats have been known to dump their load of fish if a more profitable species happens to pass by.

Everyone has the right to education.


In many communities people would volunteer to watch the lakes but they lacked enforcement power. So in March of 1998 IBAMA offered the first course in the area to train voluntary environmental agents. Those who passed would be given a license and the power to denounce or fine illegal fishing.

Unfortunately, few passed the course. A contributing factor may be that most people in the rural areas receive only up to a grade four level of education, which is all that is offered in the local schools. Even this is lately becoming more difficult as rural schools are being centralized. A school boat is often not provided meaning children may have to walk or canoe to a nearby community to go to school. This may be the canoe the family needs to go fishing. 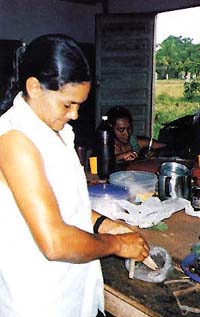 Fish is an important staple. Few people have enough farm animals to provide a constant supply of protein for the family diet. There is no place to store meat as people don't have refrigerators and often not even electricity-so meat has to be eaten quickly or shared. As a fresh source of protein, fish contributes to the people's health, particularly important in these isolated rural communities.

While herbal medicine or traditional healers help in some cases, others require what may be a long, expensive or difficult trip to the hospital in the city of Itacoatiara. In some areas water levels drop too low for boat travel and people have to travel partly overland on foot. Local health centres, trained health promoters, emergency boats and telephones are rare due to a lack of government funding to these rural areas.

As part of an austerity plan in November 1998 in order to qualify for a US$42 billion emergency loan with the International Monetary Fund, the Brazilian government made various cuts to its 1999 budget: 90 percent of Amazon conservation programs and 65 percent of overall environmental programs. The Ministries of Education and Health also experienced cuts. It is estimated that 63 percent of the 1999 Brazilian federal budget will go towards the service and restructuring of its internal and external debt. 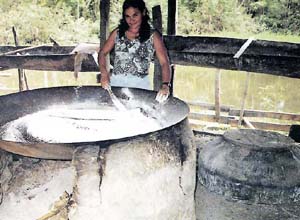 Despite being a medium income-level nation, Brazil's income distribution is among the world's worst-one quarter of its population, or 40 million people, live below the poverty line. These people are affected the most when cuts in social spending are used to pay the national debt, a debt which generally has not benefited them. The wealthy can afford imported fish as well as private education and health care.

In April of this year a Foreign Debt Tribunal, organized by the bishops of Brazil with various ecumenical and popular movements, was held in Rio de Janeiro. It examined the ethics and legitimacy of Brazil's debt and reinforced the Jubilee 2000 Campaign to cancel the debt of the most heavily indebted, lowest income countries.

Once again I find myself remembering the life and fish shared with the people of the rural area of Itacoatiara on the Amazon River.

The Tribunal found unanimously that Brazil's debt is unjust and unsustainable. Part of its verdict states that "the foreign debt constitutes an ongoing violation of the International Covenant on Economic, Social and Cultural Rights drawn up by the United Nations on December 16, 1966, which calls for recognition of each nations' right to self-determination, to freely pursue its economic development and dispose freely of its natural wealth and resources, and also requires that in no case may a people be deprived of its own means of subsistence."

Once again I find myself remembering the life and fish shared with the people of the rural area of Itacoatiara on the Amazon River. The example of perseverance and commitment given to me by people like Socorro inspire my own new commitment to working in Canada on justice and peace issues.