This is a modern tale of David and Goliath. David is a small 12-year-old boy living in Riobamba, Ecuador, and doing his best to survive. Goliath is the obstacle that stands in his way. 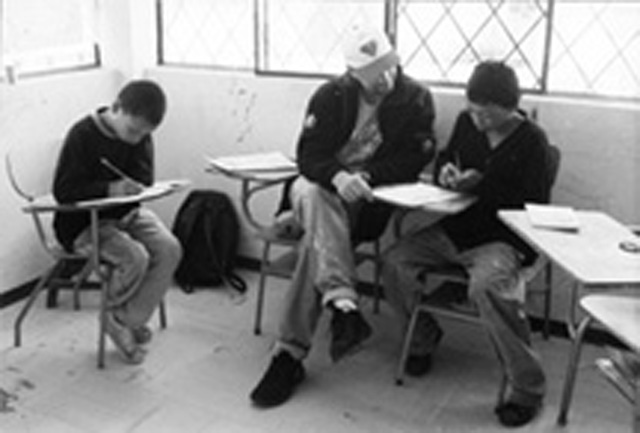 Goliath is the system of corruption presently existing in Ecuador. Goliath is the injustice that condemns a large majority of Ecuadorians to live in poverty while the wealth is distributed among the elite. Goliath is the indifference that leaves so many street children to fend for themselves, struggling to help their families, doing anything to survive. These children can be seen on every street corner, shining shoes, selling candy, begging—never seeing the inside of a classroom. Goliath is the beast that leaves many lives in tatters. But as monstrous and invincible as Goliath may seem, there is always a David ready to challenge him.

I met David while working as a volunteer in Mano Amiga, which in English means “Friendly Hand.” It is an initiative of the Human Rights Committee of the Diocese of Riobamba and was created to rescue and rehabilitate street kids who have been forced to survive on the streets because of abuse and poverty in the home. A centre was built to house 20 youth who take part in an educational and training program. David was often in and out of the centre, brought in for small theft or simply for being an eyesore on the streets.

While he was in the centre I did my best to help out, but David was not very cooperative. He could neither read nor write and lacked the desire to learn. Yet, after what I thought was so much wasted effort, David decided to stay on as a volunteer at the centre, living and working among the staff and helping out in daily chores. Part of the deal was for him to attend evening classes and to work with me a few hours a day on his reading and writing skills. He accepted with enthusiasm and took on the challenge.

AS MONSTROUS AND INVINCIBLE AS GOLIATH MAY SEEM, THERE IS ALWAYS A DAVID READY TO CHALLENGE HIM.

It has now been over two months and David has not wavered when faced with the enormous task of adopting a new lifestyle. He now reads children’s stories and gets 10 out of 10 on every dictation. He has ganas (the desire) and as long as he gets the proper support, nothing can get in his way.

David has also brought his younger brother, Edison, to the centre in order to offer him the same opportunities. Edison is already adapting well to his new environment.

In spite of the obstacles, in spite of the poverty, in spite of the seemingly insurmountable odds against him, David has dealt Goliath a fatal blow. David is a symbol of hope for the children of poverty and through his efforts to better himself, he has shown us the indomitable will of the human spirit.

After two years in Riobamba, Scarboro lay missioner Eric Lagacé is now in Cuenca, Ecuador, at one of the seven houses run by Messengers of Peace, a foundation established for orphans and children who are victims of abuse. Eric is responsible for 12 teenagers who are learning to live independent lives. They work and go to school, and are quite responsible. Eric and his co-worker Rosendo coordinate activities and chores in the house.

“We make sure that everything runs smoothly and that the kids are happy,” Eric writes. “We make sure that their rooms are clean (there are four to five kids per room), we get them up in the morning and make sure that lights are out by 11:00 p.m. We also prepare the meals. When the kids have a problem or need someone to talk to, we lend an ear or a shoulder. Weekends, we organize soccer games, board games, and rent a movie in the evening. It is quite an intense experience (24 hours a day), and some days are harder than others, but it is incredibly rewarding.”