Eric Lagacé wrote the following in November, 1999, during the aftermath of the eruption of the volcano, Mother Tungurahua. 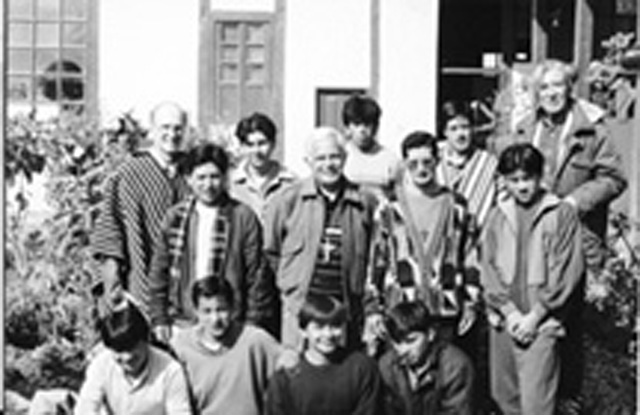 (CREDIT Eric Lagacé)
Eric Lagacé and children in Riobamba wear masks for protection from the volcanic ash of Mother Tungurahua.

It is early morning in the city of Riobamba; time to sweep away the volcanic ash again. Nobody told me that overseas mission might include learning to live with an active volcano. Early last month the volcano Tungurahua, 40 kilometres from Riobamba, decided to awaken, spewing smoke, ash, and lava.

Presently it is very active and a steady column of smoke can be seen emerging from its crater. Every morning the sidewalks and streets of Riobamba are covered with a fine coat of dark gray ash. On every corner, people with broom in hand sweep away the ash. Some days are worse than others. The ash is particularly irritating to the eyes and lungs and one often has to wear a mask covering the nose and mouth in order to get around.

I was told that as an overseas missionary I would have to adapt to various and changing situations. They got that right! The people here have been adapting and have learned to live with a very powerful and potentially destructive ‘neighbour.’ Some have actually profited from Tungurahua. It is impossible to avoid the street merchants selling posters of the active volcano. Bus drivers offer rides to see Tungurahua up close at night; a dangerous but unforgettable experience.

It is actually awesome to see this colossus in the early mornings and during sunset, dominating the scenery with its huge column of smoke. It also makes one realize the incredible power and beauty of Mother Nature.