A MISSION TO SERVE THE POOR

The Blessing of Christ the Good Shepherd Seminary

At 10:30 a.m. on Saturday, April 24, 1999, a noisy carnival procession announced to the people of Chambo that an historic moment had arrived in the life of the town. Flutes and drums provided music for colorfully dressed dancing girls and painted figures, some up to 10 feet tall, as they paraded along the streets. The bishop stood mesmerized, a broad grin on his face. 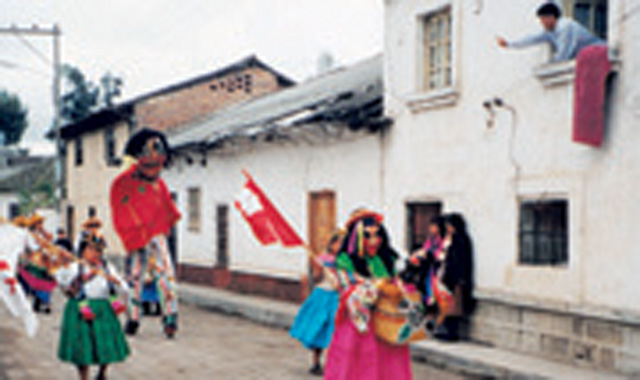 (CREDIT: Jeannine Wellens)
The blessing of Christ the Good Shepherd Seminary in Chambo, Ecuador, began with a noisy carnival procession.

Next came a more formal procession through the narrow streets. It was led by an urn of fire carried shoulder high echoing Puruhae Indian ceremonies. We sang Iglesia Peregrina de Dios (Pilgrim Church of God), and felt like a Church on the move. At the Mass the bishop spoke eloquently about the more static Church of the past, its hierarchical structure and involvement with the wealthy and powerful. He compared that with the Church of today whose mission must be first to serve the poor. It was a sermon that reflected Christ’s words about his own mission, “The poor have the Gospel preached to them,” and was based on the Gospel for Good Shepherd Sunday which would follow the next day.

Bishop Victor Corral remembered, too, his predecessor, Bishop Proaño, who dedicated his life to the poor. For this reason the new wing of the seminary, for all its space and relative splendour, will continue a very simple lifestyle based on tilling the soil, rearing chickens, guinea pigs, rabbits and sheep. The seminarians will not become an elite. They will go back to serve their Indigenous and Mestizo communities as brothers. Already they are doing that.

There are now 10 students and every week they bicycle in pairs to five hillside communities and act as catechists and animators. The meetings begin at 7:30 in the evening. One night I saved Isaias and Serafin a nightmarish bike ride in the rain through single-track mud roads full of potholes. It was only eight kilometres in Fr. Frank’s ancient pickup truck but it seemed like an eternity. When we arrived we had to borrow a light bulb which revealed nothing but narrow planks on bricks around the walls. There was no table, no chair. Serafin banged a piece of tin to announce our arrival and more than 20 men, women and young people came in their muddy boots. “We usually have 30,” said Isaias, “but the weather is bad.”

For an hour and a half we sang Gospel songs, listened to readings, a cautionary tale, Serafin on the guitar, Isaias preaching with fervor about the trap set by moneylenders. There was even a game. The time passed and the narrow planks against the wall didn’t matter anymore.

It seems to me that what these young men already do for the people each week is more important than anything else. They are learning in a practical way to become good shepherds.

All the seminarians had worked hard to prepare the ceremony at the blessing of the new wing. With much help from a team of devoted women in the town, feasting went on into the late afternoon. Everyone was invited. The well-dressed sat down with the barefooted. It was an astonishing day, full of joy.

Christopher David is a retired freelance writer who lives in the Canary Islands along with his wife Gillian. Scarboro missionary Fr. Frank Hegel, director of Christ the Good Shepherd Seminary in Chambo, wishes to profoundly thank the Davids, along with the hundreds of other donors who made possible the construction of this desperately needed addition to the diocesan seminary and who continue to support the seminary through their ongoing donations. Many of these donors are Scarboro Missions magazine subscribers.