In January 2000, my journey with Scarboro Missions began when I picked up a Scarboro Missions magazine at a friend’s house. What caught my eye was the back cover which read: Signs of being called to overseas mission. I felt God saying, “Come, follow me.” 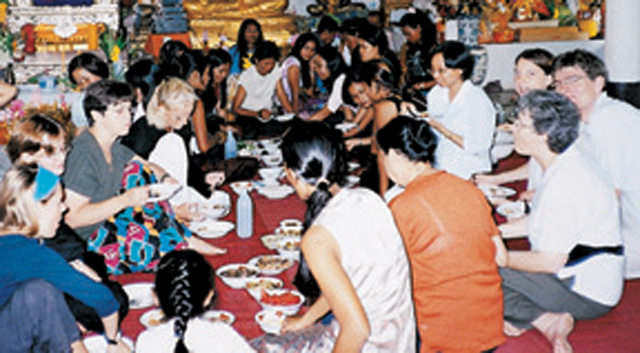 Scarboro missioners Dorothy Novak, seated first on the right, and Sr. Fernande Barnabé, third on the left, enjoy a meal with foreign volunteers at a Buddhist temple in Pattaya, Thailand.

After a year of discernment, talking with my three children about how they would feel if their Mom went overseas for three years; going through Scarboro’s application process; and letting go of the comforts of family, friends, and familiar surroundings, I left for Toronto with an openness and joy to respond to God’s call.

Arriving at Scarboro Missions in January 2001, I became part of a group of lay mission candidates who became known as the “Super Seven.” We bonded together through the sharing of each other’s gifts, through prayer, music, laughs, frustrations, and through our outings and socials.

As each day passed, I became part of a larger family—the Scarboro community of priests, laity, staff and visitors. Everyone who passed through the doors of Scarboro Missions shared their stories of mission, as well as their love, support and prayers as we prepared to go overseas.

The four month program ended with a beautiful missioning ceremony in April as Scarboro community, and family and friends from near and far joined to celebrate Mass. Then I was off to Cape Breton, Nova Scotia, to say my goodbyes and to another beautiful missioning celebration and Mass at St. Anthony Daniel Parish, surrounded by my parish community, my children, grandson, family and friends.

I found this moment the most difficult. I said goodbye to my children and grandson, knowing that I was entrusting them to God’s hands. With the many prayers and sacrifices of my family and friends, I left for mission in Thailand on May 10. I was accompanied by two other new Scarboro lay missioners, Scott McDonald and Sr. Fernande Barnabé.

Arriving at Bangkok airport we were greeted with open arms by Scarboro lay missioners Paddy and Georgina Phelan. We were then off to the city of Pattaya, about a two-hour trip. After a total of 28 hours of travel, I had arrived at my destination on the other side of the world. Coming from Eastern Canada, I often say that I went from ‘down East’ to the Far East.

It is over three months since my arrival and I have adjusted very well to the heat and the different culture. My only frustration has been the classroom setting of language school as school was never my favorite place even in younger days. I thank God for the many people in that classroom, people from France, Korea, and Japan. Each one supported me and carried me along to a better knowledge of the Thai language.

I am now blessed to live with five young Thai women, with me as the house mother. Rather, they are mothering me as the newcomer. We are teaching each other our different languages and cultures through the sharing of stories, love and support in the face of each other’s fears and concerns.

I look forward to continuing my work here with the Fatima Self-Help Centre for Women. I know the people of Thailand will give me much more than I will ever be able to give them as we journey together for the next two years.