It is early Wednesday morning in Mawangmiao, a small poor suburb of Guiyang City in Guizhou Province, China. The slow stirring sounds of people rising to another warm spring day fills the air.

Sometime in the night, three small brick storage sheds on the street below my apartment were demolished. Three thin young men now sit scraping the mortar off more than 1,000 bricks, one-by-one, with small scrapers. These men would be considered bei dous (basket on the back), referring to their work as labourers. 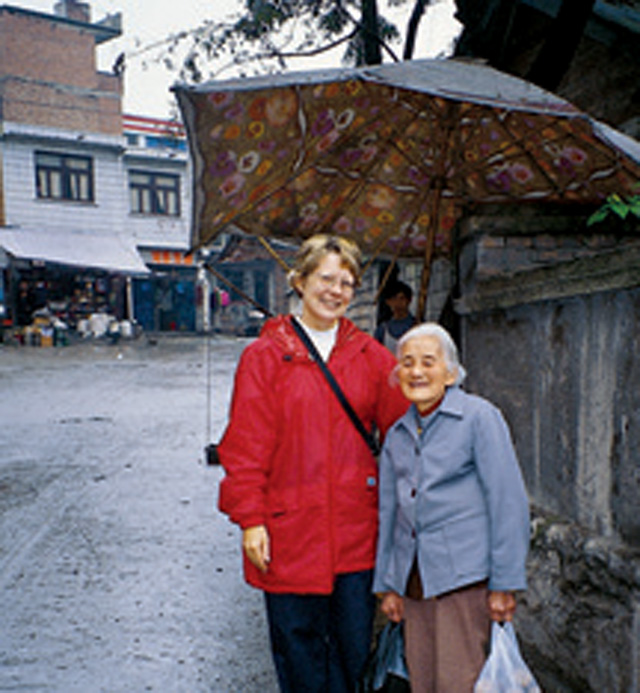 In the distance, a dog yelps mournfully, a small baby cries, and a chorus of roosters calls to each other, greeting the day.

Two vendors, shouting loudly, wander through the narrow streets that wind between the apartment buildings, selling tofu and noodles for breakfast. The buildings are mostly concrete and sound bounces off them like a finely tuned piano.

The smell of sweet buns drifts in through my open window. The rainy season is almost over and there is a hint of sunshine as dawn slowly folds into morning.

It is market day. I prepare my backpack and take my umbrella in anticipation of the sudden showers that occur quickly and intermittently and then dry up in a whisper. I make my way past Guiyang Teachers College where I teach. Everywhere, it is a hive of activity. Small restaurants line the street, inviting the college’s 2,000 or more students to taste their food.

Students hurry to school from the dormitories. Some are playing basketball on the school grounds. Beside them, retired men and women enjoy their morning exercise, dancing to Miao music. Other young people sit in squatting positions (a favorite way to relax) eating their breakfast or watching people go by.

Water and mud from construction projects cover the narrow streets. Apartment buildings are being hastily built in anticipation of the 1,000 new students arriving next September.

Lining the streets are newly-built shops and two-story buildings which house small garage-like stores at ground level and homes above. The streets wind downhill to the larger market area and bus terminal. The big department stores, so far, have not intruded upon the simple livelihood of the local people.

Between and in front of the small shops, many people sit on stools, surrounded by four or five baskets, selling tomatoes, corn, celery, cabbage, whatever is the produce of the season.

A young woman, squatting, nurses her infant on her knee, while her two-year-old holds on to her. Beside the woman is her small wooden trailer holding a variety of combs, barrettes, stockings, and other sundry items to sell. Children of vendors often spend long hours of the day beside their mothers or fathers.

“THESE PEOPLE ARE THE SIGNS OF HOPE IN THIS POOR HUMBLE CITY. FROM THE PERSPECTIVE OF OUR CHRISTIAN FAITH, THEY ARE THE PILGRIMS OF THAT FIRST EASTER LONG AGO. THEY ARE THE GOOD NEWS.”

An old gentleman sits on a small stool in the shade, holding a sleeping baby on his lap. The man’s face is deeply lined and weathered, signs of years of hard work. So many of the old take care of the young while their children make a living. They tell me it is tradition. It is also a means for survival.

An old woman with a small white cap, a blue tunic and loose pants (the style of a traditional Chinese worker) squats with her cane beside her fortune teller mat. This is her contribution to her family’s livelihood. The old often work to contribute to the family income or to make their own living, particularly if they have no family. Thus a number of old people are still working at 70 years of age and over. In the countryside, you see them shoveling and spreading stone in the building of new roads.

Further along, as I approach the large market, I am overwhelmed by the sheer number of carts and vendors selling fruit and vegetables, eggs, chickens (live as well as cooked), fish, meat and other Chinese delicacies. They beckon to me to buy their wares.

I have often wondered how all the people along the way can possibly make a living. There are rows and rows of stalls one beside the other, many selling the same products. The vendors sit from early morning to late at night, patiently waiting for customers.

The noise and heavy black smoke of passing diesel buses, pedicars and motorcycles beeping their way along the road, fills the air. People traveling along or waiting to cross the road cover their mouths to keep from breathing the ever-present fumes.

This is daily life in Mawangmiao. This is the face of poverty. These are the poor who come in from the countryside to make a living; people, for the most part, who have not been able to receive or finish their education. Without an education certificate, most of them cannot get a job with a company and must make a living as best they can.

In contrast, Guiyang City, the capital of Guizhou Province, is also a hive of bustling activity, but with quite a different environment. Here, too, there are many street vendors, but you also see people hurrying to jobs in stores and offices, and more modern cars and trucks are apparent.

Here, too, there is construction and signs of development everywhere. Food, clothes, books, personal items, which could not be found six months ago, are in abundant supply in many of the stores and small stalls. With the increase in large hotels, supermarkets, banks, insurance industries, computer shops and technical equipment warehouses, the city has come into its own.

This is part of the new expansion of China to make way for entrance into the World Trade Organization. The country struggles to bring itself into line with the West and to compete with the rest of the world in an effort to improve the quality of life of its citizens. All aspects of their lives are seeing rapid change.

Indeed, it could be said that Guizhou Province is the benchmark of the success of these economic, agriculture, education, health and social reforms. 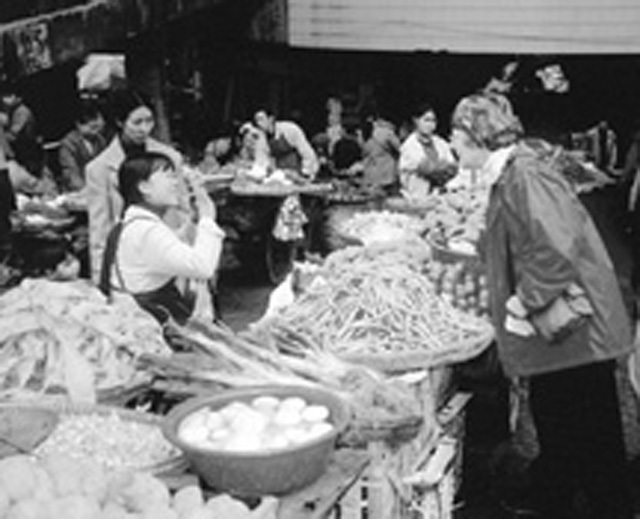 Guizhou is the second poorest province in China and primarily rural in population. At the present time in its development, as one Chinese friend said, it is an unbalanced picture. Amidst the glitz of modern development lies the struggle of the ordinary people. The inner city poverty is exacerbated by the inflow of people from the countryside. The average person cannot purchase decent housing in a climate of speculative real estate, where large apartment buildings are being built and where the rents are too high.

For ordinary working people, the average monthly salary in many cases is approximately 300-600 yuan ($56-113 Canadian dollars), in a city that requires anywhere from 600-1000 yuan a month to live above the poverty level. The young often live in dormitory-like surroundings supplied by the restaurant or hotel where they may work. It provides them with affordable housing, but is not a long-term answer for many who desire to have their own place.

Hundreds of young people come into the city from the countryside. They arrive on buses, walking, pulling carts or carrying baskets and bamboo poles looking for employment. Some load their baskets and carts with produce at distribution centres and wander the streets from morning to night trying to sell their products.

Whole families set up sidewalk stalls selling food, clothing, or sundry items. Their children hang around the stalls or help out from early morning to late at night.

Old women and young children in tattered clothing, with plastic bags on their feet and heads when it rains and with baskets on their backs, pick through the modern garbage receptacles in search of salvageable material.

Many of these people have never been to school or have had primary education only. Around 10 o’clock at night you can see them collapsed on their stalls or baskets or lying in a quiet corner, covered with the dust of the roads, exhausted by the long day and hard work.

City or countryside, where is the hope in this existence, I wonder. How can they continue on in this way, day after day, year after year?

And then, when all seems bleak, high above the street, hanging on one of the occasional dust-covered trees, a rather large bird in a lovely carved wooden cage sings a beautiful song. The song is clear and melodious, filling the air, prompting several people to look up and be cheered.

Again and again, I am amazed and comforted by the ability of the Chinese people to implant beauty and kindness in the most dismal situations. I spot a balcony lined with potted flowering plants of yellow, pink, green and red. A young man walks past, through the dust, playing beautiful music on his home-made flute (hulusis). A string of these hangs off his belt, available for sale.

Sometimes a vendor’s stall will be empty and the person in the adjacent stall will serve you and give the money to the absent vendor on his or her return. The stiff competition that exists does not seem to deter their willingness to help each other. In their struggle to live, they understand that every jiao (cent) is needed, and can be the difference between eating dinner this evening or not, and they help each other.

“If we work hard, we will succeed.” This is a saying heard, not just from the students, but from young and old alike. They live in hope of something better and are willing to do their part, despite the obstacles.

I look around on this day at the faces which greet me, old and young, from all walks of life, those seemingly well-off and those of the poor. I see faces of acceptance, of endurance; faces of my students who must overcome the insurmountable barriers of paying for their education and finding jobs.

Both rich and poor, they know the meaning of poverty, pain and struggle. It permeates their society. Through their effort to survive they have learned to suffer in silence, to endure and march on. They continue to see hope for the future. They never seem to give in to daily struggles.

To these people, life is a challenge, but it is also a gift to be treasured. There is no taking for granted what tomorrow will bring. They live in the present, taking what comes and dealing with it as it arrives.

In this experience there is solidarity. These people are the signs of hope in this poor humble city. From the perspective of our Christian faith, they are the pilgrims of that first Easter long ago. They are the Good News. In their faces shines the glory of God—the message of Easter—that the evil of poverty and sickness will not have any power over them.

They are God’s gift to people like me. They have taught me to live much more in the present, to be grateful for what I have, to be hopeful and even cheerful in spite of hardships and setbacks, to truly experience the meaning of the Resurrection. They are truly God’s revelation of hope in this developing country.