Like millions of North Americans, I was glued to the television to watch the reality series, Survivor. I wanted to see what new challenges the competitors would face to be either given ‘rewards’ or ‘immunity’. 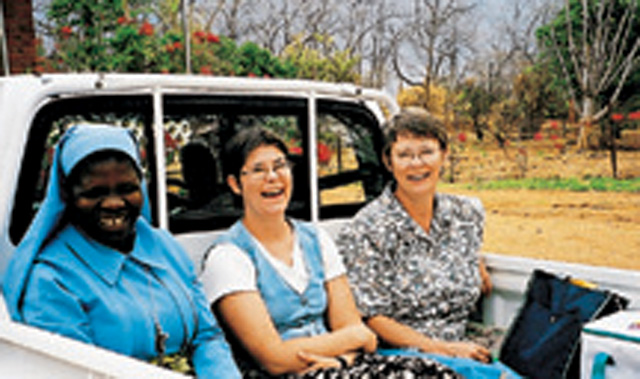 (CREDIT: Jack Lynch S.F.M.)
Barb Deg (centre) and Mary Olenick (right) ride in the back of a truck with Sr. Bernadette, Mistress of Novices for the Rosarian Sisters in Rumphi, Malawi.

On the surface, the challenge to be dumped in the middle of nowhere for six weeks with 15 other competitors and minimal supplies seemed immense. How could they survive everyday life, let alone be faced with the tremendous physical and mental challenges? Eventually competitors were eliminated from the competition until only one became the ultimate survivor, having survived everything possible.

Watching the series brought back memories of the real survivors that I lived with during my stay in Malawi, Africa. Malawians do not compete for thousands of dollars and fame. They compete to stay alive, to survive another day. A ‘reward challenge’ may give a family meat for a meal and an ‘immunity challenge’ may allow a child to survive a life threatening burn.

The people of Malawi taught me more about what it means to survive than any television show could possibly teach me. As an animal health worker and an agricultural worker, I saw many families’ entire flock of chickens die due to a preventable virus. The vaccine only costs a few cents, however the families could not afford this. Instead they lost their only source of meat. Chickens were often brought to me in hopes that I could miraculously cure them, and I could only say “nilege munkwala” (I have no medicine).

I honestly do not understand how it is that many Malawians survive their daily struggles. Perhaps it is an inherent drive in human nature to keep putting out their energies. Perhaps it is their incredible faith in God and their hope for a better future. Whatever the reason, we can learn a lot about survival skills from the Malawians.

This fall, the Survivor television show will be played out in Kenya, Africa. I pray that the competitors will be open to ‘seeing’ the real survivors.