Encountering Buddhism and Shintoism in Japan

Often when interreligious dialogue is mentioned, many people immediately conjure up images of deep and complicated theological discussions involving various religious experts – a dialogue in which only theological professionals can take part.

However, there is another aspect of interreligious dialogue that takes place in the day-to-day interactions among people of various faith traditions. We call this a dialogue of life. This dialogue takes place not in meetings or assemblies but in the everyday encounters between peoples of good will. For the past 25 years, it has been my privilege to take part in this kind of dialogue in Japan.

When I first went to Japan, way back in 1972, I went with the deep desire to proclaim the Gospel to non-Christians, to those people who did not know God or had not heard of God. I thought that I was bringing God to them, bringing God to a place where God was absent. But in Japan, my interaction with many profoundly good people of other religions has opened my eyes to the presence of the Spirit working far beyond the confines of the Catholic Church.

Shintoism and Buddhism are the major religions in Japan. Shintoism is the native or indigenous religion of the country and Buddhism arrived from China in the eighth century. Christians form less than one percent of the population and Catholics less than .05 percent.

My encounter with Shintoism has opened my eyes in a new way. Shintoists see the presence of many gods in and through the beauty of nature. For example, near a waterfall in Japan, one will often find a small shrine that honors the god of the waterfall. Or, on the top of a mountain, there will be a shrine to honor the god of the mountain.

Wherever nature displays its incredible beauty, one will find a shrine to honor the countless gods of nature. Shintoism has taught me to see God's intimate presence in nature – in the oceans, the mountains, and the forests.

One of my favourite places is the mountainous Hakone National Park, a two-hour drive from Tokyo. At the Hakone Shinto Shrine, one passes through the Torii Gate and begins a majestic walk through an avenue of soaring cedar trees. As the people give honor to the gods of the mountains, I am likewise moved by the embrace of the Creator through nature's beautiful spectacle of green. Indeed, Shintoism has challenged me to look more deeply at all of nature and feel God's warm embrace there.

In Kamakura, where I first studied the Japanese language, there is a Buddhist temple called Hase Dera. Inside the temple, stands an imposing 10-metre statue of Hase Kannon, the goddess of mercy. The statue has many heads and many arms.

When I first saw this Buddhist figure, my reaction was, "What is this?!" A Buddhist friend explained to me the meaning of the many arms and hands – no matter how many people cry out for help, the Buddha always has an extra ear to hear their call, an extra arm to help them. What a tremendous expression of God's compassion. 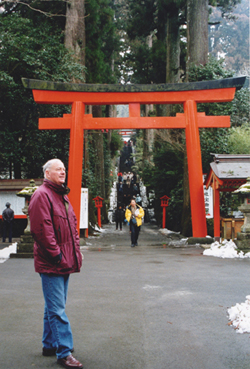 Fr. John Carten in front of the Torii Gate at the entrance of the Hakone Shinto Shrine in Hakone National Park outside of Tokyo.

Through encounters like this, I began to see how the Spirit of God has scattered pearls of wisdom and expressions of the Creator throughout many different religions. In our openness to these traditions, we are privileged to taste another aspect of God's beauty and truth.

However, for me it is in the interpersonal relationships with people of other faiths that all of this is really felt. The goodness of the people and their openness to me has challenged me to be more open to the presence of God in persons of other faiths.

Let me give an example. For many years, I worked in Totsuka, Yokohama. One day, I decided to visit the Buddhist monk at a nearby temple. In time, he and I became good friends. Years later when our parish decided to build a new church, we realized that we needed approval from the local municipal council. Without our asking him, my Buddhist friend approached the council and put his full support behind our application. His support left me wondering – Would I be open enough to speak out in favor of building a Buddhist temple in my native New Brunswick?

In planning celebrations for our first Christmas in the new church, we decided to cut some of our expenses. This included going without a Christmas tree. Two days before Christmas, my Buddhist monk friend donated a beautiful Christmas tree to our church.

When we celebrated our first Christmas, I made sure everyone in the congregation knew where this wonderful tree had come from. Here in Canada, how many of us would donate a symbolic religious gift to a mosque or temple in order that people of other faiths could celebrate their faith more festively?

In my last parish in Japan, I had a wonderful neighbour. He was 80 years old and not a Christian. Every morning at seven o'clock, he came over to the parish and swept the leaves from our church parking lot. And he refused to accept any money for this.

I could share many other such stories about my encounters with people of other faiths in Japan. In this dialogue of life, I find that I have much to learn from other faiths about goodness, generosity, compassion and the many different faces of the Creator God that Jesus came to reveal.

Fr. John Carten first went to Japan in 1972 and has served most of his priesthood there. He is now in Canada to serve as Councillor on Scarboro Missions' General Council.

Modern Japan offers many opportunities for a serious and fruitful interreligious dialogue with the followers of other religions, especially Shintoism and Buddhism. Catholics must be concerned to promote this dialogue, both because we all have a common origin as God's chosen creatures and a common destiny in God's eternal Love, and because the Church's mission is one of solicitude for the whole human family, especially in its search for truth, happiness and solidarity with all who suffer or are in want.