Carnival is celebrated in many different ways in Ecuador, depending on where you find yourself during the festivities. In many city and town streets, the people engage in intense water-throwing activities using buckets, balloons, and whatever else will hold water. For three days up to and including Ash Wednesday there are parades, dancing, and all-night musical gatherings.

"They got me!" The people of La Pradera community welcome Scarboro missioner Anne Quesnelle to their carnival celebrations. 'Playing' carnival includes getting doused with eggs and flour.

However, for the indigenous living in the remote communities of the Andes mountains, the celebrations do not end on Ash Wednesday; they only begin. The reason is that carnival coincides with the traditional harvest festival, also considered the most important religious celebration for the Kichwa-speaking culture. It would be our equivalent to Easter.

Through many offerings (songs, food, processions, and rites) the indigenous worship God for the gift of the Pachamama (Mother Earth). This is also a time of reconciliation when the young ask the old for forgiveness for the shortcomings and social sins in the community during the past year.

I was privileged to attend such a celebration this year. My friend Segundo Cuji with whom I have been working for the past two years invited me to his community of La Pradera. All 40 families in the community gather annually for the carnival celebration. On Thursday morning after Ash Wednesday, they celebrate mass followed by a communal meal which always includes a few guests from neighboring communities and elsewhere. 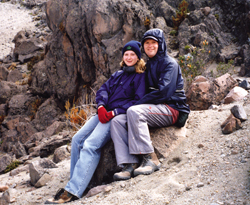 Marc Chartrand and Anne Quesnelle went to Ecuador as Scarboro missioners in 2001. This August they celebrated their fifth wedding anniversary while participating in a month-long experience living among the people of Cajabamba, one of the poorest indigenous communities in the country.

I decided to help the women cooking in the communal hut. The menu of the day included soup and lots of potatoes, all prepared over an open fire. Smoke from the fire filled the tiny hut. The entire meal took about three hours to serve as the hundred or so people took turns using the plates and cutlery available.

The afternoon was filled with games and activities. The ollas encantadas (magical pots) game is a children's favorite in which a person is blindfolded and with a stick tries to break open a clay pot filled with candies and treats. Another game involves trying to catch a live rooster that is tied to a rope and continually lowered and raised just out of reach of the catcher. The winner must bring two more roosters to next year's festivities. The day ended with a large community dance that involves the services of a local disc jockey or musicians.

Before my departure the community leaders did not lose the opportunity to 'play' carnival, covering me with eggs and flour, and offering me a glass of the local chicha, a fermented corn drink made locally for special occasions.

When I left I felt grateful for having had the opportunity to share such a joyous day with those whose daily struggle for survival leaves little room for laughter and play. Celebrating God's gifts and creation with the Kichwa young and old showed me that the poor are truly blessed. Their blessedness is not because they are among the penniless in this world, but mostly because they are among those whose hearts are truly free and grateful.