My first visit to an Out Station turned out to be quite an experience. Out Stations are small churches in remote areas where the people cannot attend mass regularly due to a lack of priests. Each week the people gather for a prayer service, but only once every two or three months does a priest come to celebrate the Eucharist. 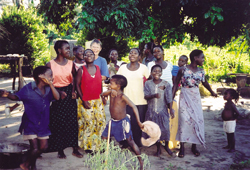 The Sunday of my visit, the priests were attending a funeral elsewhere, so Sr. Cecilia and I were asked to take communion to this Out Station. Sr. Cecilia is a member of the Rosarian Sisters, a community of African Sisters founded for the diocese of Mzuzu, the area of Malawi where I live and work.

On our arrival, we were welcomed by a large group of people anxiously waiting for "Jesus." The church was crudely made of bricks. There were very few chairs or benches. On the cement floor were several mats made from reeds for people to sit on. The altar was made of stones and mortar with boards laid across them. We covered the boards with an altar cloth that we brought with us.

Many people come from far distances for mass, so they had arrived the night before and slept outdoors. The people in these remote areas are very poor, yet their faces all carried a look of such joy and excitement in anticipation of this great event.

Approximately 200 people were present for mass. They asked Sr. Cecelia and I to take part in the entrance procession, singing and dancing to the beat of the drums. The little girls leading the procession were dressed in their Sunday best with a crown of flowers on their heads.

The dancing and singing continued on and on. Then they seated us on the altar as "special guests bringing Jesus." During the offertory, the people brought up gifts of food items.

Seeing the reaction of these people at being able to attend mass, I could not help but think that we who are able to celebrate the Eucharist daily or weekly take this great gift for granted. I will never forget the look of joy on the people's faces as they came up to receive Jesus.

After mass, Sr. Cecilia and I drove to a nearby home to take communion to an elderly sick man who had not been able to attend the service. The man lived in a very cramped, humble clay house. Most of the people who were there to pray sat outside.

When we returned to the Out Station, we were invited for lunch prepared especially for us. We sat in the building next door to the church, which had been the original church building built in the 1950s. Our table consisted of two benches pushed together and covered with a tablecloth. We had a meal of chicken, rice, nsima (corn meal), and relish. It was quite a sacrifice for this community to serve us a meal that they themselves could not afford to eat and I found it very humbling to sit down and eat it.

After our meal, Sr. Cecilia and I were presented with the food items that were brought up to the altar during the offertory. Then a woman came up to us with a basket of money. "We have taken a collection," she said, "and this is our gift to you for bringing Jesus to us." We could not refuse this gift because it is the way of their culture and they would be offended. The amount was equivalent to $3.00 Canadian. I was so very touched and humbled by this gesture, by their generosity, and by the attitude of the people throughout this most extraordinary day.