This year, Scarboro Missions celebrates its 85th year, walking with the peoples of other lands and cultures 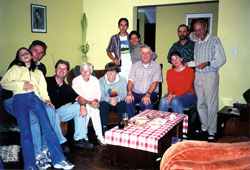 Since 1918, Scarboro Missions has promoted the reign of God as part of the Canadian Church's overseas mission thrust. We were founded as China Mission College by Toronto-born Monsignor John Mary Fraser to proclaim Jesus Christ and to establish the Church among the people of China. However, the focus of our work has evolved over the years. Today we accompany the poor and those of other faiths in Malawi, Thailand, China, Japan, Ecuador, Guyana, Brazil, the Philippines, the Dominican Republic, the Bahamas, and here in Canada. We go forth as missioners united by a common spirit and a passion to make known the love of God that is transforming all peoples and cultures.

The prophetic vision of Vatican Council II reawakened the baptismal call of all Catholics to participate in the mission of Christ. In response to this, Scarboro Missions began accepting the laity in 1974, affirming their unique gifts and vital witness as global missionaries in the work of building the reign of God. Today, Scarboro priest and lay missionaries work side by side and in cooperation with other mission groups all over the world. 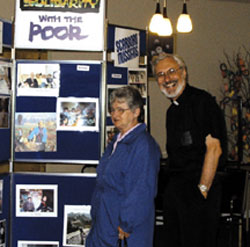 During the past 85 years, 22 Newfoundlanders have walked with Scarboro Missions as lay and priest missioners, their faith nurtured by the home and parish community.

This past summer, a group of Scarboro missionaries-Fr. Roger Brennan, Fr. Gerald Curry, Fr. John Carten, and Lay Mission Coordinator John MacInnis-travelled to Newfoundland to say thank you. They visited parishes, meeting with benefactors who have been supporting the Society for many years. With a display of photos and other items, we told the story of Newfoundlanders who served with us in mission.

Our thanks to the pastors and parishioners of the Basilica and of St. Patrick's parish in St. John's, Harbour Grace; the Cathedral in Grand Falls; St. Stephen's parish in Stephenville; and the Most Holy Redeemer parish in Corner Brook. 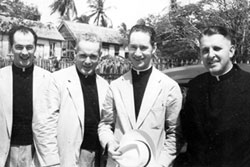 The first Scarboro missionaries to Guyana. 1953. (R-L) Frs. Ed Moriarty, Bas Kirby, Joe MacNamara, and Alex MacIntosh arrive in Guyana at the request of Bishop Weld, S.J., then bishop of the diocese.

In the last 50 years, a total of 55 Scarboro priest and lay missionaries have served this mission. Today, Fr. Russ Sampson, Fr. Linus Wall, Peter and Magda vanZyl, Maxine Bell, and Barbara White minister to the communities in New Amsterdam and Georgetown, doing parish work, health care and education. Bishop Benedict Singh, serving for more than 30 years as the country's only Guyanese-born Catholic bishop, speaks gratefully of the Scarboro missionaries who have worked with him over the years.