Fanning the flame of hope

At the bridge leading into the town the people came to welcome the Sisters. Together they walked to the church, as was the custom, singing the Salve Regina in thanksgiving for safe arrivals. That day was the beginning of more than 50 years of service of the Grey Sisters of the Immaculate Conception in the Dominican Republic. 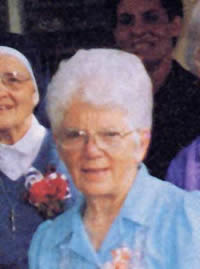 It all began when Fr. John McIver visited our Grey Sisters' motherhouse in Pembroke, Ontario, and asked if there were Sisters who would like to work in the Dominican Republic. Fr. McIver, a Scarboro missionary serving in Yamasa, was concerned that the town lacked any opportunity for a basic education. He dreamed of opening a parish school. "Were there Sisters who would help?" he asked. On September 24, 1951, four Grey Sisters arrived in Yamasa by jeep over a newly-built road.

On September 24, 2001, the scene at the bridge was re-enacted and thus began the Jubilee celebrations to commemorate and give thanks for the Sisters' 50 years of service. The people of the town gathered at the bridge. Aware of the passing of time, cars were provided and the Sisters rode in state to the church.

Once again they sang the Salve Regina. There were tributes and words of gratitude prepared by the town council, by the parish, by the authorities in education and health. The Grey Sisters expressed gratitude for having been received into the hearts and homes of the Dominican people. They expressed gratitude to the authorities of education and health for their confidence in entrusting to the Sisters the education of the children.

During the next two days the celebrations continued. Many former students returned to Yamasa. Exhibitions of art and literature were displayed. Photos of former days aroused memories galore. There were new ears for old stories. It was truly three days of Jubilee as declared by the mayor of the town.

What had happened during those 50 years? The essence could be summed up in the words of Sr. Ann Nolan in her article in the May 1992 issue of Scarboro Missions magazine: "Since 1951 our Sisters have been present in this country working among the very poor and defenceless. The heritage left us by St. Marguerite d'Youville, our foundress, has been our model and inspiration. Through the apostolates of education and health care, we have tried to inspire in the Dominican people a sense of human dignity and trust in the loving Providence of the Eternal Father. These two apostolates are the basis of our many works in the defence of human rights, of promoting social justice, and of building the Reign of God in every aspect of life." 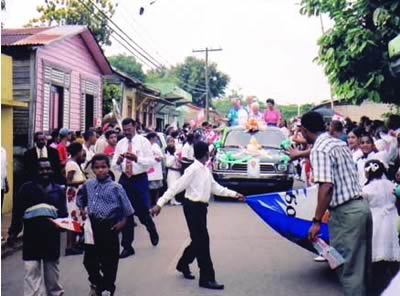 Greeted with much love and friendship by the people of Yamasa, the Grey Sisters ride to the church to begin their joyful Jubilee celebrations in September 2001. The Sisters received the same warm welcome when they arrived in the town as new missioners to the Dominican Republic 50 years before.

In 1952 the level of education in Yamasa extended to the third grade. By 1960 it had advanced to the high school level. Today there are six high schools and a large number of grade schools in the area, mainly staffed by local teachers.

In 1959 Scarboro missionary Fr. William Matte, pastor of Consuelo, invited the Sisters to extend their mission to this town in a sugarcane area. Today in Consuelo, the Sisters continue their involvement in education and health care. The public schools in which they work receive high ratings by the education authorities. At present, one of our Sisters works as department head of religious and human promotion, and another is supervisor of a school district that has 17 schools and some 10,000 children.

The Sisters also respond to the urgent needs of the sick. In both Yamasa and Consuelo they opened health centres that greatly alleviate the suffering of many, especially the children. Through the years, many professional people have given their time and service. Donations for the upkeep of the health centres have been received from benefactors both within and outside the country.

In 1986 a committee was organized to look after the needs of the elderly. Out of this was born the residence of San Lucas, opened in 1992 as a home for the abandoned elderly, most of whom are Haitians who spent most of their lives in the Dominican Republic cutting sugarcane.

Education and health care are the basis of our many works in the defence of human rights, of promoting social justice, and of building the Reign of God

In the early years, as the Sisters became more familiar with the language and culture, they witnessed a growing spirit of collaboration. Young educators offered to teach classes to children who could not be admitted to the school for lack of teachers. Many who taught two shifts during the day went back to the classrooms to teach high school students at night. These young teachers were, at the same time, trying to continue their own education on the weekends. The Sisters made requests to the Board of Education for more classrooms and more teachers, but, as always, government offices move slowly.

Health care workers demonstated the same enthusiasm. They were willing to be away from home for long periods as they prepared themselves to work in the laboratory, to assist at minor surgeries performed in the dispensary, or to work as assistants to optometrists who came at regular intervals to offer their services. It was as though a spark of hope in a better future had been fanned into flame.

Pastoral work in all its aspects has been part of the Sisters' mission in the parishes where they serve. Emphasis has been given to the formation of leaders and in the preparation of people for ministry and catechetics. As well, the Sisters have focused much effort on the people living in the sugarcane areas. Life is extremely difficult for those whose lot it is to live surrounded by the tall, bittersweet stalks that are cut mostly by hand.

The quality of education has much improved in the sugarcane regions due to the dedication of the teachers assigned to those schools. With this preparation, students hope to find work beyond the fields of sugarcane.

A marked event in the Grey Sisters' journey has been the young Dominican women who have entered our community and who continue to carry our foundress' spirit of trust in Divine Providence. Others, women and men, have joined us as associates and live a life of service in every aspect of our apostolates.

In September 2001, the three days of Jubilee celebrations ended with a very moving ceremony. As the Eucharistic celebration came to a close the Sisters lit candles bearing the symbol of a flaming torch. This light was passed on to many people from the congregation who came forward. By this gesture, the people committed themselves to carry high the light that had been fanned into a blazing flame by four women of faith who believed in the words of Jesus: "Let your light shine that all may give glory to God."

In their years of service to the Dominican people, the Sisters simply enabled people of very deep faith to believe in the strength and privilege that was theirs to be light bearers. Together we take up the torch and walk on towards the Light that knows no darkness.

The following is an excerpt from his address, in which he recognizes the work of Scarboro Father Lou Quinn, and Grey Sisters Ann Nolan and Lenore Gibb, three of the many Canadian missionaries who have served in the Dominican Republic.

"I am delighted today to meet leaders who, through education, have devoted themselves over many decades to improving the quality of life of the people of this country. I refer, of course, to people like Father Quinn, the Grey Nuns and the Sisters of Charity. 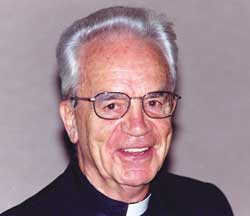 Scarboro missioner Fr. Lou Quinn received the Order of Canada in 1995 for his dedicated life in the Dominican Republic.

Since 1953, Father Quinn has devoted himself with great compassion, courage, and determination to the welfare of the people of the Dominican Republic. Widely respected by all who know him, he has helped bring about a great many improvements in such areas as sanitation, health care, housing, reforestation, and irrigation. He has been and continues to be an inspiration for many, and I am honoured to have met him.

Like Father Quinn, Sister Ann, Sister Lenore and others have been working for many years to increase access to education for the less privileged. Their hard work, strong teaching skills, deep-rooted values and courage have contributed to the blossoming of a series of schools.

I am sure that Father Quinn, Sister Ann, and Sister Lenore would agree that none of the religious orders could have made the contributions they did without the help and support of many generous and committed Dominicans. Together you have built a society that is growing stronger and serves as a model for all the Americas."