My journey to Africa

An incredible experience of walking with the people of Malawi

The little girl looked about three years old. She was in her mother's arms and so malnourished that she seemed to be having difficulty lifting her chest to breathe, as if her chest was too heavy. I was in the courtyard of the Katete Rural Hospital, a small hospital in Northern Malawi where many mothers bring their malnourished children for treatment. As meals are not provided, the mothers bring food and stay to cook for their family members receiving care. I noticed that the outdoor cooking area was dark and dismal, with a roof that looked as if it was about to collapse. At that moment I knew that these people would remain in my heart forever, and I decided that when I returned home I would continue to help in some way.

When I think back at the chain of events that brought me to Malawi, I would have to say that it all started with the shoes. In June 2002 my best friend Jennifer Goehring and I joined a global awareness group at Beaconsfield High School in Montreal where we were both in Grade 11. Everyone in the group was asked to brainstorm ways that we could make the world a better place. Jennifer and I decided to collect shoes for children in Malawi, one of the poorest countries in Africa.

Both of us had seen images on television and in magazines of barefoot children living in poor countries, and many people we knew had at least one pair of shoes in their closet that they never wore. Our hunch was correct. With just a couple of weeks remaining before schools closed for the summer, we set up a shoe drive at six elementary schools in the area and collected 1,100 pairs of shoes. The response was incredible-greater than anyone had imagined.

With shoes piled high in my parents' garage, and my shipping contact having fallen though, I had to find a new person to send the shoes through to Malawi. This led to a meeting with Dr. M. Mlotha, the Malawi High Commissioner in Ottawa. He told me that though the people of Malawi need shoes they have a greater need for food, medicines and school supplies. So, when a Canadian company agreed to ship the shoes at no charge, rather than being the end of my journey, it was just the beginning.

After hearing our story, my great aunt mentioned that her church, St. Patrick's in Agassiz, BC, raises funds for Malawi through Scarboro Missions. Lay missioners Beverley and Ray Vantomme were preparing to return to mission in Malawi and referred me to Sr. Louise Lefebvre, a Missionary of the Immaculate Conception (MIC) on leave at her motherhouse near our home in Montreal.

The Vantommes and Sr. Louise shared with me their mission work among the people of Malawi and invited me to visit them when they returned. As every door opened, my interest and desire to go increased. Now I had to convince my parents. They agreed to let me go on three conditions: that I pay my own airfare, that my father come with me, and that I make a contribution to the people of Malawi.

While trying to find other ways that I could contribute, I learned about Health Partners International of Canada. They collect donated medicines from Canadian pharmaceutical companies and package them to be delivered to developing countries. Each pack is worth $7,000 and they ask for a donation of $525 each to help with the packaging costs. With the generosity of my father's employer and others, I raised more than $7,000 for six 70-pound packs of medicine, enough to treat 9,000 people for six months, plus $1,500 in cash donations.

With these valuable gifts, along with other items like school and sports supplies, and toothbrushes, my father and I left for Malawi at the start of my school break in March 2003.

The rural area of Northern Malawi we visited is beautiful, with mud huts, monkeys, and even a giant rock called "Elephant Rock" because it is in the shape of an elephant. I stayed with the Vantommes in Mzuzu and the MIC sisters in Mzimba.

Beverley and Sr. Louise took us to many of the hospitals that will be receiving the medicine packs. I also visited Marymount boarding school for girls with Scarboro lay missioner Betty Ann Martin who teaches there. I met girls who get up at two o'clock in the morning to study and who go to school with malaria because the only way they can better themselves is though education. Their dedication made me realize how much the teenagers at my school take education for granted. 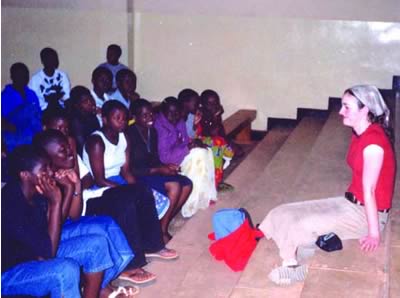 Stephanie hangs out with some of the students at the Marymount school for girls. Malawi.

It was amazing to speak to Malawian girls my own age about what it's like being a teenager in Canada. It was fun comparing our lives and discovering that we have many similar likes and interests. They listen to the same music as we do in Canada and asked what was my favorite song. I couldn't remember the name of the song, so they asked me to sing a line. Moments later they all began singing along with me. It was like hanging out with my friends at home.

Another Scarboro missioner, Mary Olenick, invited us to travel around with an AIDS awareness group called REAP (Rumphi Education AIDS Awareness Program) who put on skits at high schools in the city of Rumphi. Although the skits were in the Tambuka language, they were done with such humour that I found myself laughing.

While in Malawi, I headed out each morning with a supply of pencils given to me by the Girl Guides back home, and toothbrushes donated by my orthodontist. In some schools, one pencil is shared among three children. And many people use sticks to clean their teeth, as they cannot afford a toothbrush. I met children with smiles from ear to ear, so excited and happy to receive these special gifts.

My trip to Malawi was an incredible experience, made extra special by the wonderful care I received from Beverly and Ray, Sr. Louise, Betty Ann, Mary, and Tony Holland who teaches with Betty Ann at the school for girls. I'll never forget holding newborn babies at the Katete hospital, or playing ultimate frisbee with youth who were eager to learn this new game, or visiting the local Girl Guides. I've been a Girl Guide for 11 years so it was important for me to meet up with them in Malawi.

The people were warm and friendly when inviting us into their simple mud-hut homes. One thing I did not expect was to see so many happy kids. Even though many are malnourished and few have toys, they are happy and I think this is very important for the people of Canada to know.

I came home knowing that I would not forget the Malawi people and that I had to continue to help them. Never one for public speaking, I now find myself speaking at parishes, telling the story of my trip and raising funds for the Katete hospital. I especially wish to thank Fr. Roger Martineau and the parishioners of St. Luc's parish in Dollard-des-Ormeaux, Quebec, for their warm and generous response.

Going to Malawi made me realize how fortunate I am and how much we in countries like Canada have to give. Most importantly, this experience showed me that even though there is so much need in the world, one person's actions create a ripple effect that truly can make a difference.