...Another world is possible

We entered the large tent built with wooden poles and sheets of black plastic, stepping over some strange items on the dirt floor-a toy gun, a pile of white powder, children's torn jeans, dirty newspaper.

As we settled into seats around the room, our hosts introduced themselves as members of the Movement of Unemployed Workers. With great dignity they told us about the terrible poverty of urban workers in Brazil where more than 85 percent of the population live in cities, many in appalling conditions.

As we sat in the tent, Maria explained the items on the floor, symbols of the misery, poverty, violence and drugs of their community before. She then lifted a large green cloth from the ground and covered the symbols of poverty. In doing so, she unveiled a stunning display of fruits, vegetables, seeds, tools, natural medicines, biodegradable cleaning products, bread and more. It was a beautiful sight. Maria proudly explained that these were the fruits of their collective work. 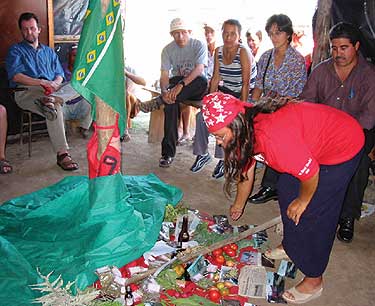 Maria unveils a stunning display of fruits, vegetables, seeds, tools, natural medicines, biodegradable cleaning products, bread, and more-the fruits of her community's collective labour. Maria and other members of the Movement of Unemployed Workers met with representatives of Development and Peace and a delegation of D&P partners from five Central American countries, all of them involved in community development. Pelotas, Brazil.

This lovely vision before us was the result of the "solidarity economy" practiced by the people of Pelotas, a small town in the far south of Brazil. Reflecting on their situation, a number of people in the area came together and decided to do something to regain their traditional values and way of life. They created a small settlement on vacant land outside of town. Each family has a small piece of land to grow vegetables, flowers, and fruit.

The solidarity economy is a model that engages the whole community in making decisions, working together, and producing items for the good of the entire community. Any profit from sales goes back into the project for the benefit of all. The Movement for Unemployed Workers has helped find work for 2,600 people, not only those in their Movement, but for many others as well.

The 18 families in the Movement have formed several groups, each taking responsibility for different aspects of production-care and saving of seeds, organic vegetable gardening, creating biodegradable cleaning products, baking, producing traditional medicines, and so on. The members move about on bikes or horse and cart, as they cannot afford gas.

We were a group from the Canadian Catholic Organization for Development and Peace, accompanied by a delegation of our partners from five Central American countries, all of them involved in community development. We were visiting the Pelotas community to see how people who are excluded from the global economic system are creating alternative ways to live. It is an inspirational model for us all, and one that they shared with others at the 2003 World Social Forum in Porto Alegre, Brazil, in January.

The World Social Forum is an amazing event that has grown from a gathering of 6,000 in the first year, to 60,000 in the second, to more than 100,000 in 2003. The theme is "Another World is Possible" and it became clear to all present that another world-a world of alternatives, where people come before profits-already exists.

The World Social Forum is not just another event; it is a process, part of an international momentum for building another world.

The Forum brings together a diversity of people who gather to share experience and learn about new ways of being. It is a place to build alliances and solidify relationships in order to be a stronger force for social change. The spirit of the five-day event is full of life and creativity. You cannot help but be energized and inspired.

We were there as a Canadian Church international development agency, along with many partner groups from other parts of the world. There were peoples from Africa, Asia and Europe, the US, and Canada, with the vast majority from Brazil and other Latin American countries. They were intellectuals, theologians, activists, indigenous peoples, peasant farmers' groups, women's groups, peace, human rights and anti-poverty activists, artists, faith groups, youth groups and thousands of young people, alternative media, and so on.

Our friends from Pelotas, struggling with poverty and working together to build a better life, were there, too. They set up booths and presented workshops. They loved the Forum. They said it was a rich experience for them-an opportunity to share and exchange with people and groups from all across Latin America and other parts of the world.

The 2004 World Social Forum will be held in India. However, the Forum is not just another event-it is a process, part of an international momentum for building another world. There are now continental social forums, regional social forums, and local social forums. People all over the world are being inspired to recreate the spirit of the Forum and build on its strengths.

Everyone who shares the principles of the Forum can get involved without having to travel across the globe. In the past year, there were Forums in Quebec City, Toronto, and Ottawa-Hull. The Alberta Social Forum is taking place in October, and planning is underway for a nationwide Forum in Montreal in June 2004.

As Eduardo Galeano, Uruguayan writer and human rights activist, said in Porto Alegre, "The most important word (for most of us) is 'I', but the most used word in the Mayan language is 'us' or 'we'. That's why the Forum was born-to say 'WE, WE, WE!!'"

Anne-Marie Jackson is education programs coordinator for the English sector of Development and Peace. 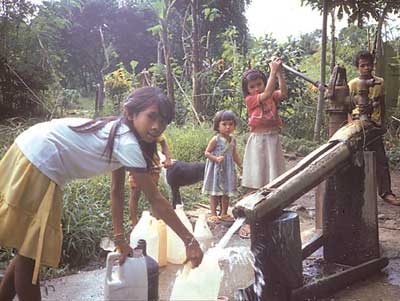 Collecting water for the family. Philippines.

Speakers at the Forum came from all over the world-Bolivia, Argentina, India, Tunisia, South Africa, Ghana, Chile, Brazil, El Salvador, Mexico, US, and Canada, with a similar message: privatization of water services leads to increased costs and, therefore, lack of access for poor people, reduced services, and poor quality.

Concerned citizens and groups from all continents are asking questions, speaking out, protesting rising costs and looking closely at trade agreements that favour the control of resources by corporations. The 2003 World Social Forum this past January was a significant moment for the groups to meet and develop strategies. It led to a coordinated series of activities throughout the world in March.

In response, Development and Peace is launching a three-year education and action campaign on water. And this fall, D&P is inviting Canadians to sign a declaration, to be presented to the Canadian government, that establishes the following basic principles around water:

"Water by its very nature cannot be treated as a mere commodity among other commodities. Catholic social thought has always stressed that the defence and preservation of certain common goods, such as the natural and human environments, cannot be safeguarded simply by market forces, since they touch on fundamental human needs which escape market logic."

From "Water, An Essential for Life", a statement issued by the Pontifical Council for Justice and Peace, March 2003. Pope John Paul II also expressed grave concern for protecting water from contamination, improper use, and from exploitation for profit in his message on World Food Day, October 2002.