Easter Vigil recalls our faith connection with water. In Exodus, God leads Israel to liberation from the slavery of Egypt through the waters of the Red Sea. Isaiah, like Christ, invites all to drink the water of life: "Come, all you who thirst, come to the waters" (Isaiah 55:1). The blessing of the baptismal water reminds us that water is a sacred gift and source of life: "At the very dawn of creation your Spirit breathed on the waters, making them the wellspring of all holiness." 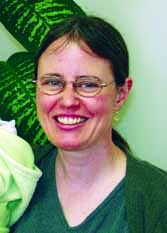 All life depends on water. The Earth is 70 percent covered by water of which only 2.5 percent is fresh. Our lives begin surrounded by water and our bodies are more than half water. After about three days without water, we die. This precious source of life, which we often take for granted, is in the midst of a growing global crisis.

According to the United Nations, the world population has tripled and water use has increased six-fold during the 20th century. Unsustainable use of water for agricultural and lawn irrigation, industries and cities are depleting ground water supplies and drying up some rivers for all or part of the year. Half the wetlands, areas of rich biological diversity helping with the maintenance of water quality and supply, have disappeared due to agricultural and other development.

Some two million tons of waste per day are disposed of in water, including human waste, industrial wastes and chemicals, and agricultural waste such as fertilizers and pesticides. The poor are most affected with 50 percent of people in developing countries exposed to polluted water sources.

One in six people, most of whom live in Asia, Africa or Latin America, have no access to clean drinking water. Almost 6,000 children die every day from diseases associated with a lack of clean water and sanitation. Access to clean water would prevent 70 percent of water-related diseases.

Poor people in Asia, Africa and Latin America generally pay more for water than their wealthier neighbours, as households in poor communities are less likely to be linked to water pipes. In much of the South, women and children are responsible for fetching the family's water, often walking long distances. The weight of the water they carry has serious effects on their health, according to the World Health Organization.

This is a Good Friday reality of our world today. Jesuit Jim Profit, coordinator of the Ecology Project of the Jesuit Centre for Social Faith and Justice, describes it well: "Poor humans provide the voice of the suffering Earth...The cry of the Earth and the cry of the poor humans is one cry, and this is the cry of Jesus on the cross."

As Christians we share in the mission of Christ "that they may have life and have it to the full" (John 10:10). We believe in the right to life and the dignity of human beings created in the image of God. It follows that people should have the right to clean water, so necessary for life and dignity.

The recommended daily water requirement for drinking, cooking and maintaining hygiene is 50 litres per person; although people can get by with 20 to 30 litres. The average Canadian uses 343 litres a day. Many Africans get by on 10 litres or less. While there are many personal actions we can take to conserve water, collective action is required to ensure that water goes to those who need it most.

There is a growing global movement of people from many faiths and walks of life advocating for priority to be given to water as a human right for the common good rather than a commodity for earning profits. This movement includes organizations such as the Canadian Catholic Organization for DEVELOPMENT AND PEACE, the Council of Canadians, the Africa-Europe Faith and Justice Network, the Freedom from Debt Coalition in the Philippines, and many others. The Brazilian Church has chosen the theme "Water, Fountain of Life" for prayer, study and action during Lent. One action promotes a petition for a democratic debate in Brazil on revising Brazilian law so that water is considered a common good under public control, and a basic human right.

Development and Peace, the official international solidarity organization of the Canadian Catholic Church, began a three-year campaign in September 2003 focusing on Water, Life before Profit. This first year promotes the human right to water.

The Development and Peace campaign encouraged people to sign and commit to upholding these principles in their Water Declaration:

Canada was the only country to oppose resolutions related to the right to water at the United Nations Human Rights Commission during 2002 and 2003. Development and Peace representatives have been meeting with officials at DFAIT about this. Among other reasons, Canada objects to recognizing a human right to water because water is not explicitly mentioned as a human right in the International Covenant on Economic, Social and Cultural Rights. The rights to food and health are mentioned. Development and Peace contends that the right to water is implicit in the rights to food and health.

Human rights are not granted by governments or the United Nations but are inherent to all people simply because they are human. Human rights can be recognized and respected but not given or taken away.

Development and Peace is calling on the Canadian government to recognize that human beings have a right to water and to promote that view at the spring 2004 session of the United Nations Human Rights Commission in Geneva. Development and Peace has also sent a letter to all Members of Parliament informing them of this campaign and asking MPs to speak out in favour of Canada's recognition of the human right to water.

This coming fall, Development and Peace will focus on the privatization of water, its impact on people, and how World Bank loan conditions encourage even more private takeover of water services. The privatization of water services increases the cost of water and denies access to the world's poorest people. Millions of poor people find the tap turned off because they cannot pay their water bill, and have no choice but to risk death or illness by using unsafe water sources. Water services are often inadequate in poor or rural areas because new infrastructure investments go first to people who are most likely to pay. Profits must also be earned for shareholders, adding to the cost of water.

Privatization of the water system is often a condition for obtaining new World Bank or International Monetary Fund (IMF) financing. After 1990, a third of World Bank loans were conditional upon some form of privatization of water services. This trend is growing. A recent cholera outbreak affecting 250,000 people in South Africa was traced back to government decisions, encouraged by the World Bank, to privatize water and to charge citizens the full cost of water services.

Reflecting on the reality of water and the broader ecological crisis can be overwhelming and lead to denial, despair, guilt or helplessness. Easter reminds us of the hope we need to inspire our action. In the words of Jesuit Jim Profit, we are called to "pay attention to the resurrection of Christ in all of Creation-the new life of the rainy season; the life of a plant that manages to grow on rocky ground; the resilience that people have in spite of very difficult circumstances. The Earth is about life. Death, destruction, pain are not the end of the story. Calvary does not conclude the story of Jesus."

Lay missioner Karen Van Loon coordinates Scarboro's Justice and Peace Office. Special thanks to Development and Peace for materials used in production of this article.

A statement from the Canadian bishops

Water is the source of all life, and a primary symbol in religious traditions. Water cleanses, purifies, refreshes and inspires. The bible speaks of living waters, of becoming a fountain of living water, of longing for running water, and of justice flowing as a mighty river. Yet how can anyone speak about the "waters of life" if these waters can no longer sustain life? As Thomas Berry writes, "if water is polluted it can neither be drunk nor used for baptism. Both in its physical reality and its psychic symbolism it is a source not of life but of death."

Without water everything dies. Water is the basic element through which all life forms emerged, exist and flourish. Water is the life-blood of the planet, and maintains an intricate and delicately balanced circulation system that has evolved for over four billion years. Water not only serves the common good, but is part of the common good...

The world's fresh water resources are finite and are now becoming market commodities, no longer public goods. Currently, inadequate access to safe drinking water affects the well-being of over one billion people, and 2.4 billion persons lack access to adequate sanitation. Some persons living in urban slums in poor countries are forced to pay between four and one hundred times more for water than their middle- and upper-class fellow citizens. No wonder that for persons living in poverty, water has become, in the broad sense of the concept, a right to life issue. The tragedy of seven deaths and thousands of illnesses in Walkerton, Ontario, as a result of a contaminated water system has brought this concept into the Canadian consciousness as well...

Not only should every human person enjoy the right to a safe environment but, specifically, every person's right to water must also be respected. Canada's bishops encourage all Canadians to sign the "Water Declaration" and to participate in the action campaigns of the Canadian Catholic Organization for DEVELOPMENT AND PEACE as a concrete way to advance these concerns.

From "You love all that exists... all things are Yours, God, lover of life", a pastoral letter on the Christian ecological imperative from the Social Affairs Commission of the Canadian Conference of Catholic Bishops, October 2003.