MISSIONARY CONGRESS OF THE AMERICAS

In November 2003, I was fortunate to be part of a wonderful, energizing week of reflection on the mission of every baptized person in the Church. It was particularly uplifting to be in Guatemala in a Latin American ambience that has been a very significant part of my personal journey as a missioner and priest.

From the time I arrived, I had the feeling it was going to be a special week. When I was Director of the Interamerican Cooperative Institute in Panama, on many occasions I visited Institute graduates in Guatemala and had to go through strict immigration procedures every time. This time, the immigration officer who took my passport smiled and welcomed me to Guatemala. I knew this trip was going to be different.

Yet, it was not only the kindness at immigration, but also the huge hanging posters in the arrivals hall of Cardinal Sepe, the Pope's delegate, that spoke volumes of the preparation that had been done to host the event.

The warmth and hospitality of the Guatemalans was contagious. Outside of the customs hall, families and volunteers waited to take the delegates to their homes. It was only the beginning of a wonderful week of hospitality that we experienced from hundreds of volunteers and thousands of parish members who opened their doors and hearts to us. They housed us, and prepared and served a couple of meals a day for five days. 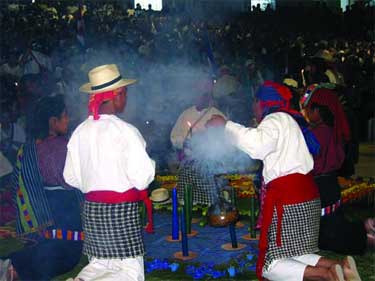 During their prayer at the Missionary Congress, the indigenous peoples of Guatemala invited all to reflect in silence. The rising smoke and penetrating smell of incense, and the burning candles in the hands of the 3,000 delegates added to the sacredness of their prayer. Guatemala. Photos by Fr. Roger Bedard, National Director for francophone Canada of the Pontifical Mission Societies.

I felt proud to be a part of the Canadian delegation. We were well received and our group of 160 represented a good cross-section of the Canadian Church. I was particularly impressed with the number of young francophone delegates who actively participated. Also present were Bishop Gilles Lussier of Joliette, Quebec; Bishop Martin Currie of Grand Falls, Newfoundland; Archbishop Emilius Goulet of Saint-Boniface, Manitoba; and Bishop Francois Lapierre of Saint-Hyacinthe, Quebec, who was one of the main speakers. Bishop Lapierre's talk conveyed his sense of humour, humility, warm personality and Gospel conviction.

Bishop Lussier and a laywoman, Adele Bolduc, director of the Missions Office of the Canadian Conference of Catholic Bishops read a message from the Canadian Bishops Conference, each alternating the reading of paragraphs from the statement.

On the first day of the event, all 3,000 delegates from the Americas were invited to go into an adjacent wooded area outside of the main registration building, where we were fed a wonderful hot meal. The feeding of thousands came to mind and it was only the beginning of a week that brought to life many passages from the Gospels and teaching of Jesus. 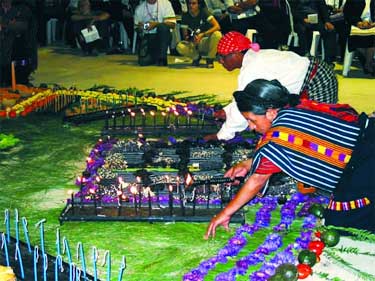 The depth of the experience of the Church of Guatemala and the rest of Central America came through loud and clear in one of the key themes of the Congress: "Desde la pequeñ la pobreza y el martirio." Literally it translates as being in mission from "our smallness, our poverty and martyrdom." While "smallness" could be understood as insignificant, the experience of a living faith of a people and a youthful Church of great vitality was of profound significance for the Canadian delegates.

The greatest impact that I felt was the number of martyrs from the Guatemalan Church, especially among the indigenous who comprise 65% of the population. This reality was profoundly present in the moments of prayer each day, led by indigenous speaking some of the 22 different native languages of Guatemala and expressing the depth of their feeling and conviction.

Particularly moving for me was the prayer led by the women of Quiche. They invited us to reflect in silence while the ambience of sacredness was enhanced with the rising smoke and penetrating smell of incense and the burning candles in the hands of the 3000 delegates. As in all the prayers of the indigenous, we were invited to face north, south, east, west and finally centre, to acknowledge a God who is everywhere and in all Creation.

Their prayer spoke of hope in a just God who continues to be present, guiding them. Each one of the women had lost a son, a husband, or a father, and in many cases all three. That these economically poor yet valiant rich women could still speak of hope and trust in God was mind-boggling. They gave a testimony of hope and a longing for justice, devoid of resentment or bitterness. Yes, they sought justice, but we also heard their willingness to forgive in spite of the persecution in their recent history in which thousands have been innocently slaughtered at the hands of the military and repressive governments.

Among the dead in Guatemala are many priests, religious and lay leaders. One of these is Bishop Gerardi, an auxiliary bishop of the city of Guatemala who was murdered outside his house a few days after he published a detailed report on the atrocities committed by the military and recent governments against the indigenous. His death and its circumstances are not unlike those of Archbishop Romero of neighbouring El Salvador.

We experienced a Church intimately linked to the paschal mystery through martyrdom; a Church that is small and economically poor, but alive and trusting in God.

At the conclusion of the opening Mass in the cathedral attended by all of the delegates, Cardinal Rodolfo Quezada of the city of Guatemala stated that the Church wants total transparency and no cover up of evidence in order to find out who was responsible for the murder of Bishop Gerardi. The most remarkable part of the intervention was when he said, "When we know who the authors of the crime are then we will know who to forgive. We must never forget the atrocities, but we must forgive those who killed our brother, Bishop Gerardi."

In Central America and Guatemala, we experienced a Church intimately linked to the paschal mystery through martyrdom; a Church that is small and economically poor, but alive and trusting in God. This Church presents a challenge to the Canadian Church to live its mission in our country from a position of smallness and poverty, intimately linked to the paschal mystery of death and resurrection.

The Missionary Congress was a reminder of the teaching of Jesus that the Reign of God begins and is present in the small things-the widow's mite, the mustard seed, the children with their joy and spontaneity. The experience was also a very uncomfortable reminder of other words of Jesus about simplicity, poverty and trust. We left there profoundly aware of the challenge before the Church in Canada.

"Church in America, your life is mission!"

This vision leads us to see that mission is first of all the mission of God working in our history. Hence the importance of an attitude of contemplation. In Redemptoris Missio, Pope John Paul II affirms that the future of mission is connected with contemplation. Hence the vision of mission as dialogue rather than conquest. To develop a culture of dialogue, I think it is most important today to recognize that what is different is not a threat, it is an expression of God who is always greater. The realization that dialogue and proclamation are not opposites, but that dialogue, an imperative for peace, is also a proclamation of Christ, the way and the encounter.

Mission Ad Gentes [to the nations; to those who have not yet heard the Gospel] is contrary to a spirit that closes people in the little worries of everyday life. Mission helps us to look further and to discover in everyday life the tragedies and the hopes of the world in which we live. Mission opens us, it brings us not only out of our country, but out of ourselves...

The first Congress was held in Mexico in 1977, sponsored by what we know today as the Pontifical Mission. It became a Latin American event known as COMLA (Missionary Congress of Latin America), held every four years. Five years ago, Cardinal Tomko, then Prefect of the Congregation for the Evangelization of Peoples, decided that Canada, the United States and the anglophone and francophone Caribbean nations should participate in this initiative to further the promotion of world mission. Thus, the first Missionary Congress of the Americas (CAM I) and COMLA VI took place in 1999 in Parana, Argentina. In November 2003, the Church of Guatemala hosted CAM II, COMLA VII. And CAM III, COMLA VIII will be held in Quito, Ecuador, in 2007.

CAM and COMLA bring together the People of God in the Americas, especially those who are engaged in missionary activity. The Congress encourages and animates the peoples of the Americas in the work of witnessing the Gospel to the world.