To Witness the Gospel today, we must confront neoliberalism Homily given on the Feast of St. Francis Xavier, December 3, 2003

Today we celebrate the feast of St. Francis Xavier, patron of Scarboro Missions. Francis Xavier began his missionary work on the Fishery Coast of India where he lived and worked with people of the lower social castes. He went on to work in Japan and died on the threshold of China. His life and work reflect some of the priorities of Scarboro Missions over the years: China (we were founded in 1918 for work there); the poor; and those who have not yet heard the Gospel.

We admire St. Francis Xavier, but he witnessed the Gospel in the 16th Century. We live in the 21st. If we are to be faithful to his spirit, we must witness the Gospel in our time, to the world as it is, not as it was, or even as we would like it to be.

The dominant characteristic of the 21st century is globalization, a word that refers to both a contraction and an expansion. 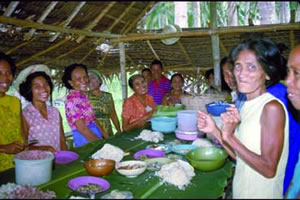 Bringing food to share at a community fiesta. Philippines.

Globalization is also an expansion of consciousness. The revolution in travel and communications has brought the peoples of the world into closer contact with each other. We are much more aware of other cultures and religions than our grandparents were. Here in Canada, a multicultural and multireligious country, our neighbours are people from every nation.

The threat that globalization poses arises from the ideology that directs it. That ideology is neoliberalism, an economic theory that advocates what it calls the "market economy"-the free flow of goods and capital, not restricted by governments.

Neoliberalism has brought us NAFTA-the North American Free Trade Agreement. After 10 years, we are familiar with the effects of NAFTA as plants close in Canada and jobs are lost to countries where companies can pay lower wages and benefits. Unfortunately, labour is not as mobile as goods and capital. Under NAFTA, labour is just another commodity to be bought and sold according to the economic law of supply and demand.

However, neoliberalism is more than an economic theory. It is a vision of life. In the neoliberal vision, human beings are producers and consumers, individuals in competition. Competition is the mantra of neoliberalism. For the sake of being competitive in the global market, companies downsize, lay off workers or force them to accept lower wages and benefits, and governments relax laws that protect the environment.

In North America we have experienced the dismantling of government as its rules and regulations are seen as an impediment to competition. In the neoliberal theory, competition is essential for a prosperous economy.

Neoliberalism has become the dominant economic force in the Western world. The neoliberals have spread their gospel with remarkable success. They have powerful allies: the corporate elite, the press, and the elected governments of the eight richest nations in the world. Yet, neoliberalism has not delivered the promised salvation, and instead has left a wake of destruction.

Neoliberalism has damaged our natural environment. So that companies can enjoy reduced costs of production-and so be more competitive-governments have relaxed laws protecting the environment. In the absence of laws against clear-cutting, our forests are disappearing. And governments are backing away from their commitments to the Kyoto Accord, which would improve the quality of the air we breathe.

Neoliberalism has damaged our ethical environment, reducing everything-including labour and services-to commodities to be bought and sold. Neoliberalism exalts individualism and competition. Material gain is the only value. In such an environment, are corporate scandals really a surprise? 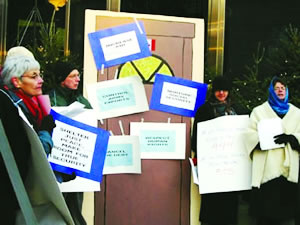 At the launch of its Cultivating Just Peace campaign in Ottawa on International Human Rights Day, December 10, 2003, KAIROS members present a posada, a Latin American advent tradition that re-enacts Mary and Joseph's search for a room at the inn. In the "Posada for Just Peace", Mary and Joseph do not find a place to stay, highlighting the fact that peace and security do not exist in today's world. KAIROS-Canadian Ecumenical Justice Initiatives is supported by Canadian Churches and Church agencies. Read about the Cultivating Just Peace campaign on page 4 of this issue.

Neoliberalism has damaged our cultural environment. It is becoming increasingly difficult for countries to protect their cultures. We recall the struggle of countries such as Canada and France to protect their publishing and film industries against the more powerful American media industries, and to keep these vehicles of t

Neoliberalism has damaged our political environment. The state is deregulating, privatising and otherwise abandoning its care for the common good-for education, health care and environmental protection. Is it surprising that so few people bother to vote?

Neoliberalism is a faith. Its temple is the marketplace. To its devotees, neoliberalism offers the community of the shopping mall.

Especially since the collapse of the former Soviet Union and the socialist states in Eastern Europe, there seems to be no alternative to neoliberalism. There is a pervasive sense of hopelessness among those who have a different vision of society.

Finding hope in God's vision of the world

Where can we find hope? We find hope in the Gospel of the Reign of God. The neoliberals have their agenda, but God has another. In the end, God's agenda will triumph. The neoliberals offer a vision of the world as a playing field. Our first reading today (Isaiah 25:6-10) offers us the vision of the world as a meal. In today's Gospel (Matthew 15:29-37), Jesus feeds the crowds. On the playing field, we compete; at a meal, we share.

We find hope in God's agenda. But what can we do to make our hope a reality? We must continue to be a sign of contradiction to neoliberalism. We do that by taking sides with the "losers" in the game. In today's Gospel, we see Jesus with those whom the world considers losers: the poor, the lame, the maimed, the blind, and the mute.

The threat that globalization poses arises from the ideology that directs it. That ideology is neoliberalism, an economic theory that advocates what it calls the "market economy"-the free flow of goods and capital, not restricted by governments.

We must not retreat into "God and me" private spiritualities that fail to consider social, economic and political realities and their impact on society and the environment.

The feast of St. Francis Xavier is an occasion for us to take the pulse of the missionary enterprise. It is said that mission today is in crisis. Yes, mission is in crisis. It is in crisis because the world has changed and mission must change to address it. To be relevant, mission must confront the neoliberal world.

The challenge before us is great. What can we do? In today's Gospel, the disciples feel overwhelmed. They ask Jesus, "Where are we to get enough bread in the desert to feed so great a crowd?"

Jesus replies, "How many loaves have you?" The disciples share their seven loaves and everyone has more than enough to eat.

Fr. Dave Warren is a member of Scarboro's Interfaith Desk and is studying Arabic in preparation for Islamic studies. Before returning to Canada, he served in mission in the Philippines and in Guyana.

At the turn of the millennium more than 1.2 billion people were struggling to survive on less than $1 a day-and 2.8 billion, on less than $2 a day. (UN Human Development Report 2003)