Scarboro Missioner embraces the study of the Muslim religion

Scarboro missioner Fr. David Warren wants to build bridges with Islam. He has worked in the Philippines and Guyana, and has done academic studies in the field of interreligious dialogue and Christian mission. For the past year and a half he has been studying Arabic, and is now at the University of Toronto. Scarboro Missions magazine interviewed Fr. Warren about this new direction in his life. 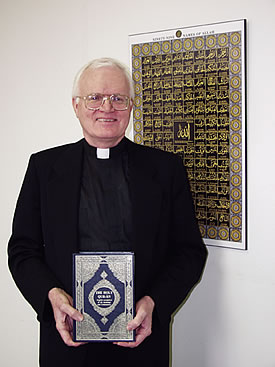 Scarboro missioner Fr. David Warren holds the Qur'an, the sacred text of Islam, while standing in front of a poster featuring the 99 names of God in Islam. Fr. Warren is able to read most of the Qur'an as a result of his studies in Arabic. One reason for taking this challenging academic journey is his hope of building bridges between Christianity and Islam.

Scarboro Missions: What drew you to the study of Islam?

Fr. Warren: I have always had a fascination with other cultures and religions and it is this fascination that first brought me to Scarboro Missions. I have always felt a call to reach out in dialogue to people of other faiths. One of the key challenges facing Christianity is the relationship with Islam. Christians and Muslims form close to 50 percent of the world's population. The need for mutual understanding is greater than ever.

Scarboro Missions: Why is the study of the Arabic language so important in this regard?

Fr. Warren: For Muslims, the Qur'an is God's full, final and definitive revelation. Further to this, Muslims believe that God (Allah) dictated the Qur'an to the Prophet Muhammad in Arabic. So for Islamic peoples, Arabic is a sacred language. It is not necessary to study Arabic in order to study the Qur'an because translations are available. But to really understand the Qur'anic texts, one must have a knowledge of Arabic.

Scarboro Missions: Can you share with us your experience of studying Arabic?

Fr. Warren: I began studying Arabic with a Muslim who gave me private tutoring. With the aid of a dictionary, I can now read most of the Qur'an. But my encounter with this Muslim teacher has also been a big part of my learning-I was learning about Islam as lived by a Muslim.

One of the first things that struck me about my teacher was his love for God and his love for the Prophet Muhammad. He loves God and the Prophet as much as we love God and Jesus. Through him I have discovered that Islam is not just about law-Muslims have a tremendous love for God. This was a revelation to me.

Scarboro Missions: What other discoveries have you made so far?

Fr. Warren: For me, the most striking thing is the Muslims' reverence for God. Islam stresses the clear distinction between God and humanity-God is the Creator and we are the creatures. Accordingly, Muslims see self-sufficiency as a perennial illusion, a perennial temptation. In recognizing our authentic humanity, we realize we are called to a profound attitude of submission to God. St. Paul, likewise, talks about this in the first chapter of the Letter to the Romans: the disorder in the world stems from our basic failure to recognize ourselves as creatures and God as Creator.

Another thing I like about Islam is the fact that, for Muslims, faith is public. We see this in the distinctive clothing worn by Muslims and by the fact that they freely and willingly pray in public.

For many people, religious practice is a private affair, particularly here in the West. Not so for Muslims. In Islam, there is a vital connection between one's faith in God and the shape of public life. The goal of the Prophet was to create a new human community in which religion has a clear role to play in terms of public policy. That is why one of the five pillars of Islam is the zakat-the giving of alms. The goal of this particular discipline is to redistribute the wealth in society.

I like the stress that the Muslims put on the Day of Judgement. We have this doctrine, of course, in Christianity, but the Muslims stress it more. Here, I am not trying to emphasize any kind of "fire and brimstone" idea. I simply want to make the point that Muslims stress the fact that our actions do have consequences.

Scarboro Missions: What do you see as the current state of Muslim-Christian relations in the world?

Fr. Warren: Clearly, there is suspicion and mistrust on both sides. What gives me hope is that around the planet, there are growing numbers of Christians and Muslims who are committed to building bridges of understanding. For example, in the Philippines where I worked for 14 years, there has been tension between the two faith groups. And sometimes this tension escalates into violence. At the same time, there are numerous efforts in that country to foster dialogue and cooperation between Islam and Christianity.

I am also encouraged by the fact that Scarboro Missions has initiated dialogue with the Muslim community here in Canada. Scarboro Missions' work in this field is just one piece of a larger Canadian picture. For example, there now exists a country-wide organization known as the Muslim-Christian Liaison Committee.

It seems to me that there is a unique opportunity for Muslim-Christian dialogue here in North America, particularly in the aftermath of 9/11. In fact, apart from the events of 9/11, Muslims and Christians in North America do not have a history of conflict. This situation has created a unique space for dialogue. And there is no reason why the fruits of this dialogue could not be exported elsewhere in the world.

Finally, I want to recognize the efforts of Pope John Paul II who has managed to forge dramatic new bonds with Muslims worldwide.

Scarboro Missions: Could you outline for us some of your personal goals in this journey you have chosen?

Third, I want to be a bridge between these two religions, a resource person who can interpret Islam to those of my Christian faith and also interpret Christianity to my Muslim sisters and brothers.