…a path to peace 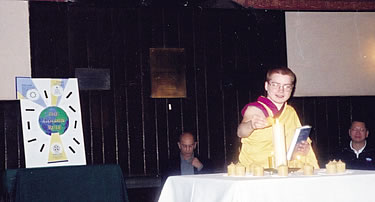 At the Assisi multifaith prayer service for peace at Holy Trinity Anglican Church, Kelsang Chogo, a Buddhist nun, lights a candle following her reading of the Buddhist version of the Golden Rule.

Scarboro Missions continues to be inspired by the courageous interfaith initiatives of John Paul II. In 1986, when nuclear tensions were at a height, the Pope convened a multifaith gathering in Assisi, Italy. Leaders of all the world's religions converged upon Assisi on the feast of St. Francis to pray for peace. On that day in 1986, most of the world's war zones honoured a 24-hour ceasefire.

Some observers consider the Assisi gathering to be the most important multifaith prayer service in history. The event has triggered interfaith activity worldwide since 1986. And because the feast of St. Francis occurs in October, that month has become a focus for organizing multifaith gatherings.

With this in mind, some of the sons of Saint Francis—the Atonement and Conventual Franciscans in Toronto—teamed up with Scarboro Missions and the Archdiocese of Toronto to organize a multifaith prayer service in October of 2003.

The organizers wanted to make a connection between the Golden Rule and world peace. Accordingly, the Scarboro Missions Golden Rule poster became the centrepiece of the prayer service. The poster features the Golden Rule in 13 religions.

During the service, one by one, representatives of the 13 religions offered a prayer of peace from their respective traditions. They then read the Golden Rule as found in their traditions. Finally, they attached a pre-cut section of the poster bearing their version of the Golden Rule to a blank background. Like doing a jigsaw puzzle, they recreated the poster to its original form. This moving ritual symbolized the forces of healing, unity and reconciliation in our world.