"Teacher! Teacher! Look what I can do!" Twenty little voices called out to me as they frolicked and played in the fishpond. I needed 20 pairs of eyes to accommodate their requests. These are children at the Camillian Social Center where I work in Chiang Rai province in the north of Thailand. The Center is run by Brother Gianni Dalla Rizza and administered by four Sisters of Charity whose nursing and nurturing skills are as highly valued as their management and accounting skills. 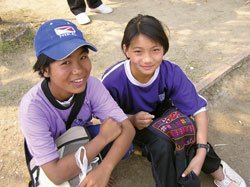 Hill tribe children at the Camillian Social Center in Chiang Rai, Thailand, work on the needlework that is their tradition.
Credit: Susan Keays

When I arrived as a Scarboro missioner in October 2003, Brother Gianni asked that I be a presence to the children. My days are spent teaching them English at the local school. After supper and on weekends, I put my mothering skills to use. That means sitting nearby as they play, or joining in their fun. It means rejoicing with them on their birthday, or in anticipation of an older sibling's visit. It also means trying to comfort them and share their sorrow if they tell me about some of the struggles in their little lives. Some children have lost one or both parents to AIDS. Many have parents dealing with drug and alcohol addiction, or imprisonment. Brother Gianni will take these little ones to see their parents on prison visiting days.

Chiang Rai province in Thailand is home to several hill tribe peoples. The Camillian Social Center provides opportunity and hope for the families of the 170 hill tribe children living at the Center.

The tribes are largely indigenous to nearby countries, such as Laos and Burma. This year, most of the Center's children are of the Akha tribe, indigenous to the Yunnan area of China. There are about 35,000 Akha living in northern Thailand. They began to migrate here a few generations ago when civil war and political unrest in China threatened them and their way of life.

Despite being born on Thai soil and having lived here all their lives, many of the hill tribe peoples in Thailand are not considered Thai citizens. They must formally apply for the rights and privileges of citizenship. Some are unaware that these rights and privileges exist. Others know, but simply neglect to apply for them. And there are those who apply several times only to have the paperwork repeatedly lost or rejected for minor clerical reasons.

It is estimated that at least 30 percent of the hill tribe population are without citizenship. This means that they lack the right to vote and their movements are restricted. So are their employment options. They are unable to use the tactic, common in Thailand, of sending a family member out into the world to earn money to maintain the rest of the family.

Without citizenship they have no access to government health and welfare plans, or to a government education for their children. Some villages have built one and two-room schools in which village members attempt to teach the children. With little money for books and supplies, and no materials in their own language, their task is daunting. 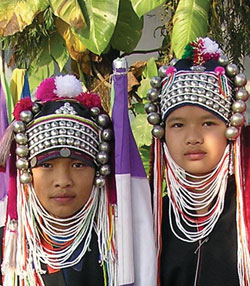 It is customary for hill tribe people to wear tribal clothing whenever they venture outside their village.
Credit: Susan Keays

The Camillians, an Italian community of Catholic priests, brothers, sisters and laity, are dedicated to the care of the sick. They first came to Thailand 52 years ago and began to shelter and tend to victims of leprosy on this land where the Center now sits. Ten years ago, with leprosy largely eradicated, the hill tribe peoples asked Brother Gianni for help. Their immediate objective was to obtain a Thai education for their children. The Camillians responded with compassion and opened the Center.

Brother Gianni spends a lot of time visiting the villages. While he is there, families regularly ask him to make room for their children at the Center. The Center accepts school-aged children on a priority basis and assumes complete financial responsibility for them. There are never enough openings to meet the need. Most villages struggle with a variety of problems. Poverty abounds and illnesses like tuberculosis and AIDS are common. Some members are tempted by the financial rewards of the drug trade; others by the temporary escape of alcohol and drug abuse.

Every village has a leader who is intimately acquainted with each family. Brother Gianni relies on the leaders to help him determine which children are the most needy and the most likely to adjust to life away from the village. For those children without citizenship and therefore not entitled to a Thai education, Brother Gianni begins the long and difficult application process. Some applications may remain in progress for years, yet no child's application has ever been declined.

The children who come to live at the Center seem happy to be there. I see them laughing and playing with each other as they wash their clothes, help in the kitchen and do chores on the grounds. Smiles and laughter are as common during chore time as during playtime. Here they live in much the same style as they do in their villages. They eat Thai food and sit on the floor to eat. However, they have their own plates rather than eating from a common dish as they do at home.

The children learn to speak Thai in order to study at the local school, but at play they use their tribal languages. I often see the girls working at the gorgeous needlework that is their tradition. The Center's buildings and grounds are adorned with tribal symbols, honouring and celebrating the children's traditions. On Sundays and special occasions, the children wear their colourful and distinct tribal clothing.

Many hill tribe peoples are Catholic, and crosses and other religious symbols are commonly embroidered into their garments. The non-Christian children at the Center join us for mass and prayers. Their families seem to respect our practice, choosing to share our liturgy when they visit. Similarly, on school occasions, the Catholic, Christian and animist children accompany the Center's Buddhist children to the nearby temple, which is active in the children's development.

When errands take Brother Gianni in the direction of a village, he loads the children from that village into his vehicle and drops them off for a day, a morning, or even just for an hour or two. It speaks volumes for everyone involved that the children are as excited and happy to return to the Center as they are to spend time at home. At the end of each school term, the children return to their homes and villages.

Who but God can know what the future holds for the hill tribes, their children and way of life? I can only rest in the conviction that the Camillian Social Center and its benefactors are responding generously and lovingly to the request of the hill tribe peoples to help their children.