At the very northern tip of Brazil where the Amazon jungle gives way to the plain, rolling hills stretch to the mountains of Venezuela and Guyana and to Mount Roraima, Brazil's highest peak. The Indigenous peoples who live in this area – the Makuxi, Inkarikó and Patamona – believe that this is the dwelling place of Makunaima, the mythic creator of the world. Makunaima and his two sons, Inshikiran and Anike, are considered by the Makuxi people to be their ancestors, the founders of many of their villages. In the imagination of the Makuxi, history and myth merge. 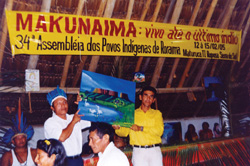 The annual Assembly of Indigenous Peoples of Roraima, February 2005, whose banner announces the theme: 'Makunaima is alive till the last indigenous person.'
Credit: Davison Wapichana

It was to this hero that the renowned Brazilian author, Mário de Andrade, turned to for his 1928 novel, Macunaíma, which set the stamp for modern Brazilian literature. And it is in their ancestor Makunaima that the Makuxi sought inspiration for the annual Assembly of Indigenous Peoples of Roraima in February 2005 with more than a thousand in attendance. The theme of the Assembly was: "Makunaima is alive till the last indigenous person."

The Makuxi, who now number 15,000 (Brazil's second largest indigenous group) have been fighting for their land ever since Europeans first arrived more than 500 years ago. Over the course of the 20th century, cattle ranchers invaded Makuxi territory, exploiting the Indigenous peoples as cheap labour. By the 1970s, gold diggers arrived, searching for precious stones in the rivers. Game and fish became increasingly scarce because of the outsiders who poisoned streams and frightened off game. Hunger and disease spread among the people.

In reaction to this suffering, the Church helped foster the Indigenous Council of Roraima. Indigenous leaders began to organize the people to defend their land. They succeeded in driving out gold diggers and started a campaign to reclaim their land titles, demanding the removal of cattle ranchers. With international donations, the Church assisted the villagers in buying their own cattle herds, thus helping to diminish hunger. Each village had five years to reproduce the herd of 50 cattle and then pass on the new herd to another village.

In 1998, after 30 years of struggle, the Makuxi succeeded in getting the federal government to pass a law for the demarcation of their territory. Most of the cattle ranchers left the area in return for compensation. All that is needed is the signature of President Lula to turn the Raposa/Serra do Sol Reserve (Fox/Sun Mountain Reserve) into law.

However, the Makuxi face a new challenge. Since the 1990s, about a dozen rice growers have invaded their lands, setting up rice-growing operations. Many streams and rivers are now polluted by the use of chemical fertilizers, causing skin and intestinal diseases among the Makuxi people who rely on this water for drinking and bathing. These rice growers, supported by most of the local municipal and state politicians, want to see the Reserve ratified as a blocked reserve, permitting non-indigenous people to remain, their operations interspersed among indigenous blocks of land. The Makuxi, however, want a continuous reserve, implicating the exit of all non-indigenous.

At the end of 2003, the federal government announced that it intended to ratify the Raposa/ Serra do Sol Reserve as a continuous reserve. On January 6, 2004, the rice growers, along with certain indigenous groups reacted violently. Approximately 20 percent of the Makuxi support the blocked reserve option, believing that economic development can only occur with the presence of outsiders in the reserve. More than a hundred indigenous people invaded the Surumu Mission, destroying a small clinic, smashing school classrooms, and taking three missioners hostage for three days.

In the state capitol, Boa Vista (population 200,000), the rice growers set up roadblocks for four days, preventing car traffic from leaving or entering the city. They invaded the FUNAI (the National Indian Foundation of the federal government) offices, and unsuccessfully attempted to invade the cathedral. Cars painted with the slogans "Roraima State: 100% Brazilian!" and "Get out Diocese!" circulated in the city.

The protesters targeted the Diocese of Roraima because of its solidarity with Indigenous peoples – an expression of the Church's preferential option for the poor. Federal and state police did nothing to break up the illegal roadblocks. The violent political pressure of the rice growers and their supporters was successful: the federal government put off signing the ratification of the reserve. The issue is now at a standstill in Brazil's Supreme Court.

More violence occurred on November 23, 2004, when the federal justice minister arrived in Boa Vista. That morning, the rice-growers sent in five truckloads of thugs to burn down the houses of four Makuxi villages that had been set up in July 2004 near the lands invaded by the rice growers. At least 137 families were left homeless. The Makuxi, remain undaunted: little by little they have been rebuilding their homes. As the slogan of the recent Indigenous peoples' Assembly says, "Makunaima is alive till the last indigenous person." 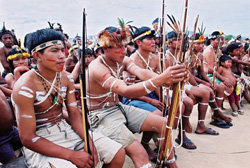 It was at the Assembly that they elected the new coordinator for the Indigenous Council of Roraima, Marinaldo Justino Trajano, as well as the vice-coordinator, Jairo Pereira da Silva. When asked what he considered to be the greatest difficulty and the greatest hope faced by the Makuxi people, Marinaldo responded:

Marinaldo also had a message for Indigenous peoples in Canada:

"I had the opportunity to get to know Canadian Indigenous peoples at the World Social Forum [January 2005, Porto Alegre, Brazil]...The suffering is the same, the difficulty is the same throughout the world...One of the workshops, 'The know-how of Brazil's indigenous peoples,' created a very strong union among us as Indigenous peoples of the world. I believe that we discovered something we call union, where we're going to unite in order to journey together...

"A message that I would like to give to Canadian Indigenous peoples is not to lose hope; we are struggling together. We hope that when the Raposa/Serra do Sol Reserve is ratified as a continuous reserve, the victory will be not only ours here in Brazil, but one for every indigenous area in the world. That is our hope...and we hope too that 2005 will be a successful year for our indigenous brothers and sisters in Canada."

Let us all join in solidarity with the Makuxi and other Indigenous peoples of the world, as they struggle for their land claims and other basic human rights. Then we can say with them, "Makunaima is alive till the last human!"

Fr. Ron MacDonell does linguistics work with Indigenous peoples in Brazil, helping them in their efforts to preserve their language and culture.

On April 15, 2005, Brazil's President Lula (Luiz Inacio Lula da Silva), signed the ratification of the Raposa/Serra do Sol Reserve as a continuous area. Non-indigenous people (including rice growers) have one year to leave the reserve, with compensation. Certain areas remain outside the reserve: military zones on the Venezuelan and Guyanese borders, the town of Uiramuta, power lines and roads.

This is a major victory for the 16,000 Indigenous peoples of seven nations, mainly Makuxi, who live in the reserve of more than 1,700,000 hectares. It is the fruit of 30 years of struggle (see article, "Makunaima is alive" in this edition), and is considered an historic restitution of indigenous rights after centuries of exploitation. We rejoice with the Indigenous peoples of Roraima who are indeed living a true Resurrection. Alleluia!

However, despite this victory, there continue to be incidents of violence on the part of the political elite, ranchers/rice-growers and Makuxis who oppose the federal decision. Besides roadblocks and a bomb targeted at the home of a university professor (Indigenous Studies), four federal police agents were taken hostage. They were released one week later after intense negotiations. Please keep Roraima in your prayers.

Scarboro Missions' Justice & Peace Office has posted some details of this situation on its website. Please visit: www.scarboromissions.ca