An Indigenous story from the Amazon

When the great god Tupa made the world, there was only day. In the beginning there was no night. The daughter of the great cobra, Cobra Grande, was concerned for her husband, the Caboclo. Mother Earth provided him with game, fish and rich soil, but he worked constantly. Since the night did not exist, he did not know when to rest. 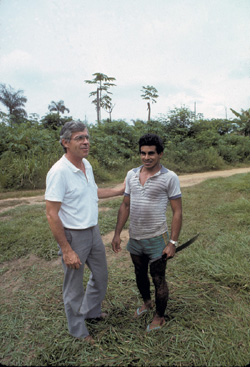 As Bishop of Itacoatiara, Brazil, Scarboro missioner George Marksell championed the rights of the caboclos, the subsistence farmers and fishers of rural Amazonia. He lived among them for 38 years.

One day, the Caboclo's wife asked his friends to search for her mother, Cobra Grande. She would know the secret of the night. They paddled their canoe a long distance and found the great cobra curled in the sun on the shore of a lake. The caboclos told her of her daughter's worry and of her request to learn the secret of the night.

The cobra slithered to the bottom of the lake. After a long time she surfaced with a nut – the fruit of the tucuma palm – in her mouth.

"You must not open the nut. Only my daughter will have the power to open it so that the darkness, and nothing else, will escape from inside."

As the caboclos paddled home, they became very curious because of the strange sounds that came from the tucuma nut. Although the great cobra had warned them not to break it open, they were overcome by curiosity. Unable to resist the mysterious noises, they broke open the nut.

"Someday," she said, "the son of Tupa will come to visit us. Then all that our people fear will be hidden again in the tucuma nut."

The tucuma palm tree in the Amazon produces an orange oily fruit containing a hard black nut. This nut is used to make jewelry, including rings often worn as a symbol of solidarity. Bishop George Marskell and others in Brazil began using the tucuma ring to express commitment to the preferential option for the poor.

Bishop Marskell was a member of the first team of Scarboro missioners who went to Itacoatiara, Brazil, in 1961. He served as bishop from 1978 to 1998 when he died of pancreatic cancer. Bishop George lived the preferential option for the poor adopted by the Latin American bishops. He championed the rights of the caboclos, the subsistence farmers and fishers of rural Amazonia whose daily lives are influenced by knowledge retained from their indigenous roots.

Bishop George denounced development when it adversely affected these rural dwellers and the Indigenous people called the Waimiri-Atroari. One development project, the Balbina hydroelectric dam built on the upper Uatuma River in the 1980s, produced a miniscule amount of electricity, significantly out of proportion to the approximately 2,360 kilometres of tropical forest flooded for the reservoir. In this reservoir the decomposing forest poisoned the water, killed the fish and devastated the lives of more than 2,000 rural families living downstream from the dam.

In order to create the reservoir, one third of the Waimiri-Atroari population was displaced. Their 1973 population of 3,500 fell to 374 by 1986. Displacement, epidemics, and violent encounters with outsiders resulting from highway construction, tin mining and other projects nearly wiped out the Waimiri-Atroari.

Bishop George, along with other bishops, pastoral workers and missioners, organized local and international solidarity to halt operation of the Balbina dam and seek compensation for those adversely affected. However, the Brazilian Department for Amerindian Affairs (FUNAI) reacted against these demands, expelling pastoral workers from the Waimiri-Atroari territory and forbidding entry to any group who did not support the government relocation and assistance program for the Waimiri-Atroari.

Today, the situation of the Waimiri-Atroari has stabilized, despite all that they have suffered. Their population is increasing and in 2004 the 1000th Waimiri-Atroari was born.