The Lubicon Lake Cree, an aboriginal society of about 500 people living in Northern Alberta, have never surrendered their rights to their traditional lands. Living in a more isolated area, they were overlooked when a treaty was negotiated with other Indigenous peoples in the region in 1899. Since then, land rights negotiations with the federal and Alberta governments have repeatedly broken down, been subverted or delayed.

Between 1979 and 1983, oil and gas companies drilled more than 400 oil wells within a 25-kilometre radius of the Lubicon community. This devastated the Lubicon's traditional way of life as moose, their staple food, fled the area along with smaller animals important to the trapping trade. Welfare rates soared from less than 10 percent to more than 90 percent. Over the following years the Lubicon's health deteriorated. Birth defects and still-births increased along with alcoholism, suicide and domestic violence.

Today there are more than 1,700 well sites within Lubicon Traditional Territory and the Lubicons estimate that in excess of $13 billion in oil and gas resources have been extracted. The Alberta government has profited from royalties on these resources and the federal government has received corporate income taxes from the companies involved.

At the price of the destruction of their traditional economy and pollution in their traditional territory, the Lubicon gained some occasional employment. They still lack running water, decent housing and other basic community services. The Lubicon say they have never consented to the resource extraction that is steadily destroying their health, culture and way of life.

Friends of the Lubicon, a group advocating for Lubicon rights, report even more proposed oil and forestry development in Lubicon Traditional Territory. In August 2004, the Province of Alberta issued oil sands exploration leases to Deep Well Oil and Gas, which now has a major interest in leases covering more than 63 square miles inside Lubicon Traditional Territory. The leases overlap a one-mile buffer zone around proposed Lubicon reserve land. The company has announced plans to drill up to 512 wells. 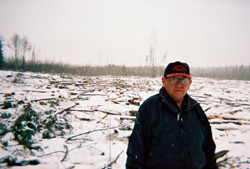 Lubicon elder Reinie Jobin in front of an area clearcut by Deep Well Oil and Gas in Lubicon Territory.
Credit: Kevin Thomas/Friends of the Lubicon

The Lubicon are concerned about how these wells and possible further development might affect fish and wildlife habitat as well as local surface and ground water supplies. Oil sands development has been linked to water depletion and contamination in other areas.

In February 2005, Friends of the Lubicon reported that forest companies had begun making unsolicited proposals to develop a timber supply that the Alberta government quietly announced might become available. Much of this timber supply lies inside Lubicon Traditional Territory and was part of the area Alberta leased for clear-cutting to Daishowa-Marubeni International (DMI) in 1989. As a result of an international consumer boycott campaign, DMI has kept a commitment made in 2000 not to harvest any trees in the Lubicon area of concern until their land rights are resolved. DMI's timber rights in the area reverted back to the Alberta government.

Lubicon Chief Bernard Ominayak denounced other forest companies' attempts to gain access and the Alberta government's potential selling of access to these disputed lands and resources where a settlement with the Lubicon has yet to be reached.

Scarboro Missions' Justice and Peace Office participated in a recent campaign organized by Outaouais Lubicon Solidarity (OLS) urging the Minister of Indian Affairs to negotiate for the settlement of aboriginal land rights with the Lubicon people. As well, Friends of the Lubicon has organized a campaign to urge oil companies to act responsibly and not proceed with operations in Lubicon Traditional Territory without consultation and consent of the Lubicon people.

For Chief Ominayak, the Lubicon Lake Cree's long struggle for justice is guided by their aboriginal spirituality: "We believe we not only have rights but that the Creator charged us with a special responsibility to protect and preserve our traditional territory, and only by preserving and protecting our traditional territory will it be able to support future generations of our people."

Many thanks to these organizations for materials used in production of this article.

ABORIGINAL PEOPLES: Recognizes the diversity of distinct cultures. Applies to First Nations, Inuit and M.tis. Refers to all Aboriginal peoples in Canada collectively or more than one Aboriginal person.

FIRST NATIONS PEOPLES: Describes both Status and Non-Status Indians and replaces the misnomer "Indian," which arose when Columbus arrived in North America but thought he had landed in India.

INUIT: Inuit are the Aboriginal people of Arctic Canada. The word "Inuit" means "the people" in the Inuit language, and is the term by which Inuit refer to themselves. "Eskimo" is a term many find offensive. It was given to Inuit by European explorers and is derived from an Algonquin term meaning "raw meat eaters."

"For far too long the hopes and aspirations of Indigenous peoples have been ignored; their lands have been taken; their cultures denigrated or directly attacked; their languages and customs suppressed; their wisdom and traditional knowledge overlooked; and their sustainable ways of developing natural resources dismissed. Some have even faced the threat of extinction. The answer to these grave threats must be to confront them without delay."

This draft Declaration urges all countries to respect, protect and promote the right of Indigenous peoples to control their own lives and futures; to maintain and develop their unique cultures and ways of life; and to control and benefit from their lands and resources. Such global standards would attempt to prevent the widespread human rights violations against Indigenous peoples by addressing root causes.

The United Nations General Assembly called for the adoption of this Declaration as a major objective of the International Decade of the World's Indigenous People (1994-2004). With the close of the decade, the draft Declaration on the Rights of Indigenous Peoples has still not been adopted. Despite the urgent need, the international community is slow to reach consensus on the details.

Last December, the UN General Assembly approved a Second International Decade of the World's Indigenous People beginning in January 2005. The Assembly urged all involved parties to do their utmost to complete the mandate of the UN Working Group and present a final draft Declaration for adoption as soon as possible. This commitment was renewed at the UN Commission on Human Rights meeting in Geneva from March 14 to April 22, 2005.

Scarboro Missions has participated in a campaign, organized by Amnesty International Canada in conjunction with other human rights groups, urging the Canadian government to encourage other states to work towards timely adoption of a strong and effective Declaration that would be achieved by following a realistic timetable and process.

Special thanks to Amnesty International for information used in the production of this article.