In Ecuador and Canada, as in other parts of the world, Indigenous peoples struggle to preserve their identity, culture and way of life

By Carolyn Beukeboom
May 2005

After having spent three years working as a nurse among the Indigenous peoples of Riobamba, Ecuador, I was excited by the opportunity to work within a First Nations community here in Canada. As a student in the Primary Health Care Nurse Practitioner program at McMaster University, I worked for six weeks in a remote fly-in community in Northern Ontario. This experience opened my eyes to the realities of life for Canadian First Nations peoples. I discovered many similarities between their lives and that of the people I journeyed with in Ecuador. 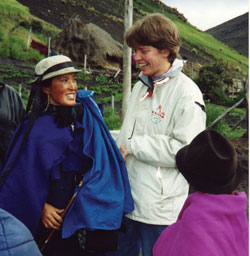 In Ecuador, Carolyn Beukeboom's long-term commitment as a Scarboro missioner allowed her to develop a bond with the people.

It is well known that the history of the European colonization of North America, along with government policies, has directly impacted First Nations peoples in Canada. It is a history of suppression and destruction of culture, identity and traditional way of life. Today, First Nations communities deal with social isolation, difficult access to health care, alcohol and drug abuse, increased suicide rates and family violence.

Ecuadorian Indigenous peoples endured the oppression of the Spanish conquerors and the same attack on their cultural identity and traditions. Today, they continue to face discrimination and the struggle for human rights.

During my first few weeks in the First Nations community, I realized the hardships that the people endure. Out of school for summer vacation, children and youth had no summer camp programs and few activities to entertain and occupy them.

Unemployment rates were high due to limited job opportunities. With minimal activities available, people often turned to alcohol and drugs. I found the cost of living extremely high-even a four-litre bag of milk cost $11.99. Hunting and fishing were still very common in this community. However, other food came from the grocery store and the high costs meant that healthy choices were not always obtainable.

As a newcomer to the community, the development of trust is always paramount to any relationship. Working at a nursing station, I had daily contact with the people for medical health concerns. However, communication was difficult in those first few days because the people were very reserved. Many of the older people spoke only Ojibway and thus we often needed a translator, which created another barrier to effective communication.

In Ecuador, my long-term commitment as a Scarboro missioner allowed me to develop a bond with the people. Only with time and by learning the language was I able to get to know them on a more personal level.

Sadly, the reality of life for First Nations peoples in the north-living on an isolated reserve only accessible by plane-means that health care professionals are often short term, and trusting relationships are difficult to sustain. Many of the nurses are there for only a few weeks at a time. However, I met many dedicated health care professionals who have worked for numerous years among northern First Nations communities.

Often during my walks through the community I was drawn to the beat of the drumming circles. Many northern communities have abandoned their traditional ways. However, this community cherished the ways of their ancestors. There was a desire among the elders to maintain the traditions of the people. Drumming circles among the youth, young adults and elders were popular. In many households Ojibway was still spoken and passed on to younger generations. Ojibway was also taught at the local school.

Comparing this to my Ecuadorian experience, I recall that music among the Indigenous peoples of Ecuador was also highly treasured. The people enjoyed the traditional folk music played with wind instruments such as the quena (a traditional flute) and panpipes, along with drums and stringed instruments. Sadly, many households are slowly replacing Quichua, the indigenous language, with Spanish. This gradual loss of ancestral language is also occurring in many Aboriginal communities in Canada.

Natural medicine through traditional healers and shamans is important to the culture of indigenous communities. While in Ecuador I learned of the significance of herbal plants for treating various ailments. In Canada, the sweat lodge, as was explained to me, is used as both a sharing circle and a time of healing and cleansing. While I was in the community, the sweat lodge was often used for people suffering from physical illnesses, but more importantly, it was used to provide support to people through difficult life circumstances and crises.

During the latter half of my working experience in the North, a community member invited me to participate in a sweat lodge ceremony. The ceremony took place in a small dome-shaped tent (representing the womb of Mother Earth) within a larger log cabin. Red hot stones and sacred herbs were placed in the centre and all participants sat in a circle. Water was poured on the hot rocks to produce steam, creating a sauna effect.

There were four rounds or stages to the sweat, each round representing the four directions-east, west, north and south. The first round was considered the most important as people prayed for their own health and well-being. There was much singing and drumming during this time. The second round was for our loved ones, the third for our community and the fourth for the people of the Earth. Between rounds, people were permitted to leave the tent to cool off from the intense heat.

The entire ceremony took nearly three hours. I left the sweat ceremony with a positive energy and a renewed sense of hopefulness. Being able to participate in this sacred ceremony gave me new insight into the spirituality of the people and their sense of hope for their community despite the daily challenges and sufferings.

It is obvious that Indigenous peoples throughout the world struggle with similar issues. All are trying to preserve their identity, culture, customs and language. Our heritage is an important part of who we are and where we come from. It is vital that we cherish and value the knowledge and wisdom that has been passed on from generation to generation.

It is my prayer and hope for these Northern Ontario communities that they will gain a sense of love, peace and self worth, and be proud of who they are and what their rich Aboriginal traditions offer to this world.