He struggled with adversity, all the while searching for peace and acceptance

During my years as a missionary in Japan, the work I found most appealing was that of teaching catechism. Although there were never large numbers of catechumens, at no time did I find myself without someone to teach. 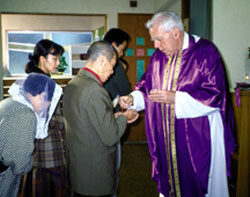 To be God's instrument in bringing a person who knows nothing of God or the purpose of life to the baptismal font is indeed a wonderfully consoling experience. Among those whom I baptized, the majority were factory workers, office workers and housewives; some were nurses and school teachers. I always cherished the ambition of baptizing a doctor.

In Japan a doctor commands a lot of respect and is in a position where he can influence others. If one of my students was a doctor, I thought, his desire to become a Catholic might influence others to do the same. However, my ambition was never realized. The closest I came to baptizing a doctor was in a man called Fujii-san.

For 44 years I served as pastor of the church in Ichinomiya, a city of 200,000 people. About one kilometre down the street from the church was a psychiatric hospital. Among the patients were two parishioners from our church and I hoped for the opportunity to bring Holy Communion to them.

In Japan, most psychiatric hospitals have a policy of only allowing close family members as visitors. These hospitals are especially wary of allowing people of religion to visit patients. They don't want aggressive religious sects taking advantage of the mentally ill by proselytizing. Some psychiatric hospitals are government owned, but fortunately the hospital in Ichinomiya was privately owned by a Dr. Sato.

When Dr. Sato decided to run for city councilor, a number of my parishioners were among those on his campaign wagon. Dr. Sato won on the strength of the Catholic vote and was elected to city council. Encouraged by this, the doctor and I became good friends and he always warmly welcomed me at his hospital. Each month when I brought communion to my two parishioners, the hospital staff provided me with a private room for my use.

"I'VE BEEN READING THE GOSPEL OF LUKE," HE BEGAN, "AND IN THE INTRODUCTION I READ THAT LUKE WAS A DOCTOR.

One day the two Catholic men brought a third man to my room and introduced him as their friend Fujii-san. He was not a Christian but he had a favour to ask of me. From his two friends he heard that there was a library at the church, he said. He wanted me to ask Dr. Sato to allow him out of the hospital once a week so he could spend a few hours studying there. It was difficult to have privacy and quiet in the hospital because all the patients live, eat, work and sleep in one large enclosure behind iron bars.

Because Fujii-san was not a violent patient, permission was readily granted. So once a week he came faithfully and spent a couple of hours studying in the quiet of the church library. After a couple of months, I decided to pop the question.

"Have you ever thought of becoming a Christian?" I asked.

"Oh yes," he replied, "I want to be baptized and for my baptismal name I would like to choose the name Luke."

Surprised that he knew so much about the rite of baptism, I asked him why he wanted the name Luke. Then he told me his story.

The Gospel of Luke

"I've been reading the Gospel of Luke," he began, "and in the introduction I read that Luke was a doctor. You see, I'm almost a doctor myself. I went all through medical school and in my last semester, on my final exam, the pressure got to me. I cracked up and ended up here in this hospital. My parents and relatives are so ashamed of me that they never come to visit. I'm grateful to my two Catholic friends for introducing me to you because now I have you for a visitor when you come to the hospital."

After two months of instruction, Fujii-san was ready for baptism. It was a joyful day when his two friends and other parishioners gathered at the church for mass and I baptized, confirmed and gave Fujii-san his first Holy Communion.

In the next few years I continued to visit Fujii-san and his two friends at the hospital every month and bring communion to them. And then one day I noticed that Fujii-san's condition had deteriorated. He was thin and pale and his entire body was shaking. So I anointed him.

When I visited a month later, his two friends told me that Fujii-san had died and his family gave him a Buddhist funeral. I'm sure Fujii-san got a big welcome from St. Luke, his patron saint.

After ordination, Scarboro missionary Fr. Alex McDonald was sent to Japan where he lived and worked among the Japanese people for more than 50 years. He is now retired and living in Canada.