In the last 40 years, Catholics worldwide have been rethinking their attitude toward non-Christian religions. The Second Vatican Council is now seen as a watershed event in this new openness towards Jews, Muslims, Buddhists, Hindus and members of other religious traditions. The last four Popes have provided courageous leadership as the Church journeys through the uncharted territory of interfaith dialogue. 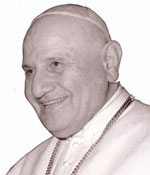 "At the day of judgement, we won't be asked whether we realized unity but whether we prayed, worked and suffered for it."
Pope John XXIII

During World War II, John XXIII was an archbishop and the Vatican's apostolic delegate in Istanbul, Turkey. His courageous actions during this period saved thousands of European Jews condemned to extermination. He also played a crucial role in alerting the Vatican and the Allies to the horrendous genocide that was taking place.

Moved by an intuition that the whole Church was in need of renewal, Pope John convened the Second Vatican Council (1962-1965). This "Ecumenical Council" produced groundbreaking documents on interfaith dialogue, social justice, religious freedom and religious pluralism.

Vatican II is one of the most important interfaith events in Church history. In choosing to respectfully acknowledge the presence of grace, truth and holiness in other religious traditions, the Council changed the Catholic Church forever.

So great an impression did Pope John make upon the Jewish community of Rome that the Chief Rabbi and a number of his congregants went to St. Peter's Square to pray for the dying pontiff during his final days. 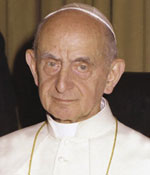 "We acknowledge with respect the spiritual and moral values of the various non-Christian religions for we desire to join them in promoting and defending common ideals in the spheres of religious liberty, human brotherhood, teaching and education, social welfare and civic order."
Pope Paul VI

Pope John's successor, Paul VI, dreamed of a Church in conversation with all the religions and cultures of the world. In fact, he is the chief architect of a Catholic infrastructure for interreligious relations.

Even before the Council had ended, he established the Secretariat for Non-Christians (later renamed the Pontifical Council for Interreligious Relations). This Pontifical Council is the Church's major vehicle for promoting dialogue with other religions.

Pope Paul's encyclical, Ecclesiam Suam, was the first encyclical in Church history to promote interreligious dialogue. During each of six pastoral trips abroad, he met with local leaders of world religions. When he visited India, hundreds of thousands of people lined the streets and stood in silence. Hindus regard a religious leader, of whatever faith, as a special manifestation of God. 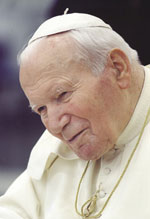 Some observers have described Pope John Paul II as the most important ecumenical and interfaith Pope in history.

This "man from a far country" readily embraced Paul VI's commitment to dialogue and quickly expanded the Church's interreligious outreach. To the interfaith task, John Paul brought a practical, hands-on approach and a tireless capacity for travel. In most of his approximately 100 trips abroad, this most global of Popes met with leaders of numerous faiths; in fact, he often requested such meetings.

Interreligious encounters were also a staple of John Paul's daily ministry in Rome. A prolific writer, he was responsible for a staggering output of documents, statements and speeches on the topic of interfaith.

Pope John Paul forged dramatic new bonds with Judaism and Islam, challenging centuries-old patterns of prejudice and alienation. He was the first Pope in history to enter a synagogue and a mosque. It is estimated that during his pontificate he had more than 150 meetings with Muslims.

This interfaith pilgrim also met with representatives of many other religions. During his travels, he consistently demonstrated respect for Hindus, Buddhists and members of local religious cultures.

In 1986, John Paul invited leaders of the world's religions to Assisi, Italy, to pray and fast for world peace. Some observers have described the Assisi gathering as the most important multifaith prayer service in history.

Pope John Paul II was a man truly possessed of a global consciousness – he realized that there would never be global peace and justice without dialogue among the world's religions. 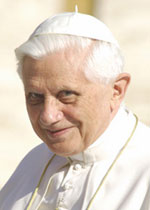 Benedict XVI – In the service of peace

"The Catholic Church is committed to tolerance, respect, friendship and peace between all peoples, cultures and religions."
Pope Benedict XVI

Having worked so closely with John Paul II for so many years, Pope Benedict XVI gained lots of exposure to interreligious dialogue. In his first public statement as Pope, he vowed to continue John Paul II's groundbreaking work in the realm of ecumenical and interfaith dialogue.

In his first papal sermon, he stated: "To those who follow other religions...the Church wishes to engage with them in an open and sincere dialogue in search of the true good of humanity and society."

The healing of relations between Christians and Jews was the centrepiece of John Paul II's interfaith commitment. Shortly after Benedict's election to the papacy, he met with Jewish leaders from around the world. In 2005, he became the second Pope in history to enter a Jewish house of worship. At the synagogue in Cologne, Germany, he won a standing ovation for his warning about rising anti-Semitism and for his call for renewed dialogue between Christians and Jews.

Last year, Pope Benedict visited Auschwitz, the former Nazi concentration camp in Poland. "It is a duty before the truth and the just due of all who suffered here, a duty before God for me to come here as the successor of Pope John Paul II and as a son of the German people," he said.

Benedict has also followed up on John Paul's efforts to build bridges with the international Muslim community. When receiving the representatives of other religions who attended the celebration for the beginning of his pontificate, Benedict stated: "I am particularly grateful for the presence in our midst of members of the Muslim community, and I express my appreciation for the growth of dialogue between Muslims and Christians, both at the local and international levels. I assure you that the Church wants to continue building bridges of fellowship with followers of all religions, in order to seek the true good of every person and of society as a whole."

Pope Benedict has met with numerous Muslim leaders in Rome and outside Italy. In November of last year he visited Turkey, a Muslim country and became the second Pope in history to visit a mosque.

During the four-day visit to Turkey, the Pope was persistent in his promotion of Muslim-Christian dialogue: "Christians and Muslims, following their respective religions, point to the truth of the sacred character and dignity of the person. This is the basis of our mutual respect and esteem, this is the basis for cooperation in the service of peace between nations and peoples, the dearest wish of all believers and all people of good will."