The search for ecological justice

Many consider climate change, with its moral and justice implications, to be the defining issue for our time.

On a Sunday afternoon in February this year, people gathered in Toronto for a multifaith retreat on translating our faith into action and making a difference for the environment. After exploring ecological spiritual resources from Islam, Judaism, and Christianity that inspire protection of the environment, participants learned about effective environmental advocacy from the insights of a leading climate change campaigner. This event was part of a retreat series on Environmental Decline and Climate Change as Moral Issues initiated by the University of Calgary's Oikos Centre for the Environment.

These kinds of gatherings are like springs of water in what can be a desert experience when reflecting on our ecological reality. The signs are in the news, in science reports, and in United Nations documents—we are facing a great extinction crisis as species disappear up to 1,000 times the natural rate and this is predicted to rise; we are losing forest area about the size of Costa Rica each year; rising ocean temperatures are being linked to a phytoplankton decline of about 1 percent per year—phytoplankton are a critical component of the planet's life support system and produce about half the oxygen we breathe.

“...the Spirit is at the origin of the noble ideals and undertakings which benefit humanity on its journey through history: "The Spirit of God with marvelous foresight directs the course of the ages and renews the face of the earth.”

The year 2010 equalled the 1998 and 2005 records for the world's warmest year. An unprecedented sequence of extreme weather events occurred last year including a record heat wave and wildfires in the Russian Federation, monsoonal flooding in Pakistan, and calving of a massive 250 square kilometre iceberg from the Greenland ice sheet. While a longer time frame is needed before attributing an individual event to climate change, this sequence of events matches climate science projections of more frequent and more intense extreme weather events due to global warming.

We are threatening the life support systems of the planet and not yet taking sufficient action. In Copenhagen in 2009 and Cancun in 2010, countries participating in the United Nations conference on climate change have not made adequate commitments to reduce greenhouse gas emissions to meet their stated target of keeping temperature increases below 2°C so as to avoid dangerous climate change. Many consider even the 2°C target to be too high based on recent science and are calling for even greater emissions reductions. A United Nations Environment Program report estimates that current reduction pledges are likely to result in global temperature increases of 2.5 to 5°C by the end of this century.

Canadians have one of the highest rates of greenhouse gas emissions per person. In 2010 Canada finished near the bottom, in 54th place out of 57 countries, on the Climate Change Performance Index, which evaluates and ranks countries based on their greenhouse gas emissions and climate protection policies. We have international recognition for undermining the United Nations climate talks and for very weak emission reduction targets and policies.

It is tempting to be overwhelmed by the immensity of this desert, to ignore it and move on to more pleasant experiences or the demands of everyday life.

Jesus was led by the Spirit into a desert for 40 days where he was tempted. He left the desert "filled with the power of the Spirit" and went on to proclaim good news to the poor, release to the captives, sight to the blind, and freedom for the oppressed (Luke 4:14-18). And so Jesus began his mission of establishing the Reign of God on earth. 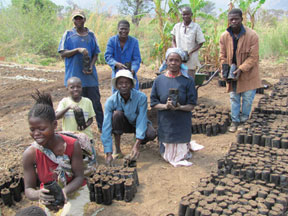 Members of the Elderly and Disabled Group made up of people dealing with the effects of polio, amputations, impaired vision, and old age who want to help support themselves and their community with a seedling and irrigation project. Rumphi, Malawi.

As followers of Jesus we are called to participate in this mission. What might this mean in our situation today of ecological deterioration and persistent poverty where around a billion people still go hungry every day? How can we witness the good news?

There is growing recognition that poverty and the ecological crisis are related. As the Canadian Catholic Bishops have described, "the cry of the earth and the cry of the poor are one. Ecological harmony cannot exist in a world of unjust social structures; nor can the extreme social inequalities of our current world order result in ecological sustainability." We participate in a world where excessive pursuit of profit has resulted in over consumption and exploitation of the goods of the earth, disregard for impoverished people, and so much waste dumped into the air, water, and land that it threatens the fabric of life on earth.

Pope John Paul II has said, "the ecological crisis is a moral issue," a statement echoed by many. It is also a justice issue.

The Global Humanitarian Forum estimated that "every year climate change leaves over 300,000 people dead, 325 million people seriously affected, and economic losses of US$125 billion." The vast majority of those affected are impoverished people living in the global South, yet they have contributed the least to climate change. Industrialized countries of the global North have produced the majority of greenhouse gas emissions and have benefited the greatest from the current global economic system at the root of the crisis. Climate change will also have a growing impact on future generations as well as on plants and animals at risk of extinction.

The Holy Spirit has been moving throughout history to bring about a fuller realization of the reign of God, and inviting all people to participate in this work. Catholic theologian and author Denis Edwards has written about the Spirit at work in the great movements of history:

"To follow Jesus means being led by the Spirit as he was Spirit-led at every stage of his journey.. .The Spirit of God is always the Spirit of communion, communion with our human sisters and brothers and communion with the whole of creation. It is not difficult to see the Spirit at work in great movements of our times—the ecological movement, the movement seeking justice and peace above all for the poor of the Earth, and the feminist movement seeking the full equality of women. In spite of all the human failures and sin that play a role in these movements, they are places where the Spirit of God is powerfully at work, calling us to our own part in these as movements of liberation and hope."

People come from a diversity of backgrounds, skills, faiths, and motivations for involvement which include concern for children or grandchildren; solidarity with our neighbours in the global South already struggling with the impacts of climate change; desire to protect the environment; or faith in the God of life and love. Broader and deeper participation and collaboration are still needed until perhaps together as an ocean we can begin to turn the tide and learn to live more justly and sustainably on earth.

Every now and then one of my children will ask a question which brings me to a halt as I struggle for the words to respond. As a family, we have tried to gently educate our children, discover together the wonders of creation, and explain why we do such things at home as recycling or saving energy. We also bring them along to family friendly demonstrations calling for stronger action on climate change. One evening my daughter asked me, "Will the earth be okay?"

After some soul searching I replied that we trust in a loving God who created this wonderful earth and who will one day heal the earth and make all things new. We don't know what that will be like and we leave that to God. We do know that in the meantime we need to work with God and do our part in loving creation.

A growing number of development and environmental organizations, faith-based organizations such as KAIROS, trade unions, politicians, economists, and other supporters continue to advocate for a global Financial Transactions Tax (FTT). An FTT is a tiny tax (e.g. 0.05%) paid by banks on the trade in financial transactions such as stocks, bonds, foreign exchange, and derivatives. This tax could raise billions of dollars each year for fighting poverty and climate change at home and around the world.

Make Poverty History Canada is strengthening its campaign for an FTT this year as France, an FTT supporter, will host the G8 and G20 summits. For more information and action ideas please visit www.robinhoodtax.ca

Examples of a growing movement

Greening Sacred Spaces is a practical program developed by Faith and the Common Good (FCG), a network of Canadians from different faiths and cultures who seek common ground for the common good. Greening Sacred Spaces assists faith communities to create a more sustainable and energy efficient place of worship and to educate their members about ecological issues. Scarboro Missions supports this interfaith initiative and conducted an energy audit of its Toronto central-house with the assistance of Greening Sacred Spaces. From this, Scarboro did several energy and water efficient retrofits including lights, insulation, weather stripping, thermal windows, and a solar assisted water heater.

Climate Action Network Canada is a nation-wide coalition of environmental, faith, labour, development, aboriginal, health, and youth organizations committed to making action on climate change a reality. Scarboro Missions, along with more than 100 diverse organizations, has signed onto a Climate Action Network Canada open letter calling on the government to end tax breaks for oil, coal, and gas companies of around a billion dollars every year—money better spent on pressing social and environmental needs in Canada and abroad.

Make Poverty History Canada has also called for an end to fossil fuel subsidies and for this money to be redirected towards helping low-income countries cope with climate change. MPH Canada has more recently started campaigning for action on climate change, as part of its focus on ending poverty, due to the serious negative impacts of climate change on the world's poorest and most vulnerable people, such as causing more hunger. MPH Canada is part of the broader movement calling for a financial transaction tax as a way of raising billions of dollars each year for fighting climate change and poverty at home and around the world (see box above).

People's Assemblies on Climate Justice took place across Canada during the December United Nations climate negotiations in Mexico. The assemblies were organized by the Council of Canadians, KAIROS, the Indigenous Environmental Network, and others. The ongoing assemblies seek to create a space where community organizers, labour, environment, or faith groups, students, and other concerned citizens, can work together to share experience, knowledge, and resources in order to build a local response to a global crisis.

350.org, an international campaign, is building a movement around justice and science-based solutions to the climate crisis. Many scientists and climate experts consider 350 parts per million to be the safe upper limit for carbon dioxide in our atmosphere and 350.org calls for a return to below this level. In October 2009 they organized the first 350 International Day of Climate Action and 5,245 events took place in 181 countries. Scarboro Missions participated in the Ottawa event (see photo).