April 5 is International Golden Rule Day. This year, it will be celebrated at the United Nations headquarters in New York with a special screening of "Animating the Golden Rule...", a documentary by Tina Petrova inspired by Scarboro's Golden Rule poster. In this life affirming video, Toronto high school youth through rap, art, and drama, embody the values of the Golden Rule.

Golden Rule Day is an effort of the Ethopian-based Interfaith Peace Building Initiative, a URI member organization in Ethiopia chaired and founded by Mussie Hailu, a Golden Rule activist and collaborator with Scarboro's Interfaith Department. The day was first proclaimed in April 2007.

On November 12, 2009, the United Nations unveiled The Charter for Compassion (based on the Golden Rule) that calls upon the world to take practical and sustained action in an effort to address the political, religious, and social issues of our time. 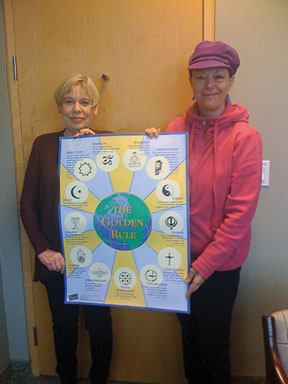 On behalf of Scarboro Missions, Tina Petrova presents Karen Armstrong with a Golden Rule poster and introduces her to Scarboro's wealth of Golden Rule materials during Karen's recent visit to Toronto.

The movement to mobilize the Charter was the idea of Karen Armstrong, a former Catholic nun and author of more than 20 books on comparative religions. In 2008 she won the TED (Technology Entertainment and Design) prize of $100,000, for her "wish" (One Wish to Change the World). Karen received support from the Fetzer Institute, a private foundation based in Michigan, who provided the resources and people to make her wish come true. So far, nearly 70,000 people have affirmed the charter.

Armstrong has been quoted as saying, "It isn't just a matter of being nice. It requires you, all day and every day to put yourself in someone else's shoes... It's hard work, but we have to try because we're in a dreadful state. Our world is dangerously polarized."

The principle of compassion lies at the heart of all religious, ethical and spiritual traditions, calling us always to treat all others as we wish to be treated ourselves. Compassion impels us to work tirelessly to alleviate the suffering of our fellow creatures, to dethrone ourselves from the centre of our world and put another there, and to honour the inviolable sanctity of every single human being, treating everybody, without exception, with absolute justice, equity and respect.

It is also necessary in both public and private life to refrain consistently and empathically from inflicting pain. To act or speak violently out of spite, chauvinism, or self-interest, to impoverish, exploit or deny basic rights to anybody, and to incite hatred by denigrating others—even our enemies—is a denial of our common humanity. We acknowledge that we have failed to live compassionately and that some have even increased the sum of human misery in the name of religion.

We therefore call upon all men and women ~ to restore compassion to the centre of morality and religion ~ to return to the ancient principle that any interpretation of scripture that breeds violence, hatred or disdain is illegitimate ~ to ensure that youth are given accurate and respectful information about other traditions, religions and cultures ~ to encourage a positive appreciation of cultural and religious diversity ~ to cultivate an informed empathy with the suffering of all human beings— even those regarded as enemies.

We urgently need to make compassion a clear, luminous and dynamic force in our polarized world. Rooted in a principled determination to transcend selfishness, compassion can break down political, dogmatic, ideological and religious boundaries. Born of our deep interdependence, compassion is essential to human relationships and to a fulfilled humanity. It is the path to enlightenment, and indispensable to the creation of a just economy and a peaceful global community.

Go to www.charterforcompassion.org to join the charter.